An Israeli army veteran, Eyal Cohen is a muscular man with a shaved head, dark eyebrows and a Middle Eastern accent.

When he came to the United States in 2000, he started out washing dishes, and since then he has lost and made money in ventures ranging from real estate and water purification to moving services and exporting antique furniture to Israel.

Now Cohen has found a calling as a landlord in Niagara Falls, taking in tenants who wouldn't pass standard tenant screening criteria. To him, there's more at stake than making money. To the downtrodden in the city – the poor, the parolees and the desperate – he has become a champion of sorts, at least to those willing to follow the rules.

"We believe that everybody deserves a chance, so we take everybody," Cohen said. "As soon as you do a problem, you're out, and if you’re out, you're never gonna be back to our apartments."

For those who remain, tenant life has become better. They have a landlord who comes around often, knows their names and even passes around for free $200 worth of cigarettes every week.

"It's working out good," said Shawn Johnson, an ex-con from Buffalo and a resident of Cohen's 54-room New Niagara Place. "For a rooming house, it's all right. I mean, everybody would rather have their own little apartment. If you're in a transition, this is the spot to come." 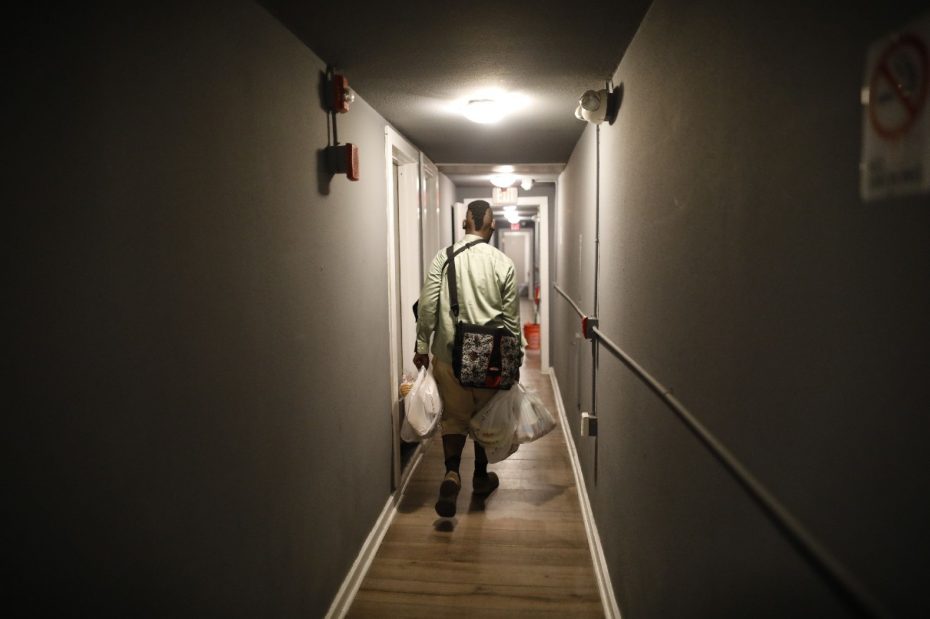 A new tenant carries his belongings as he moves into a room in an apartment building in Niagara Falls. (Derek Gee/Buffalo News)

Social Services officials have taken notice, and they send Cohen some of their hardest cases who need a place to live.

In the past two years, Cohen has invested close to $2 million buying and renovating about 20 properties in some of Niagara Falls' toughest neighborhoods. He rents out some 150 apartments in the central part of the city. It started with his acquisition of the Zodiac Apartments at 1967 Niagara St., a rooming house infamous for the many sex offenders who lived there. After an arson fire damaged the building in 2016, Cohen and business partner Rene Finkas bought the building, renovated it and renamed it New Niagara Place.

"He keeps the places well-kept," said Niagara County Social Services Commissioner Anthony J. Restaino. "I think part of how he operates that place is he just doesn't tolerate any type of activity that may be untoward, which I think is great for the community, so it ends up being a safe place for us to have people there."

The 54 rooms at New Niagara Place are the entry point to Cohen's network of apartments for people "in transition," as Cohen puts it.

"For us as a company, it's a good place to select the people," Cohen said. "We see the good people, the good tenants and we move them to our (other) properties."

Shawn Haseley, who lived on a Niagara Falls porch for three years, is one of the tougher cases that confronted county officials.

The 48-year-old Niagara Falls man's time as a squatter on a Seventh Street porch led to amputations of his lower left leg and the toes on his right foot because of frostbite.

After neighborhood pressure, the county worked to find him a place to live. They turned to Cohen, whose unique policies have made him a go-to guy for Niagara County Social Services Department caseworkers.

Haseley is now a tenant at the Niagara Street rooming house, and he says he's satisfied with Cohen.

"It's going great, thanks to these guys," Haseley said. "He put me up in a nice spot." 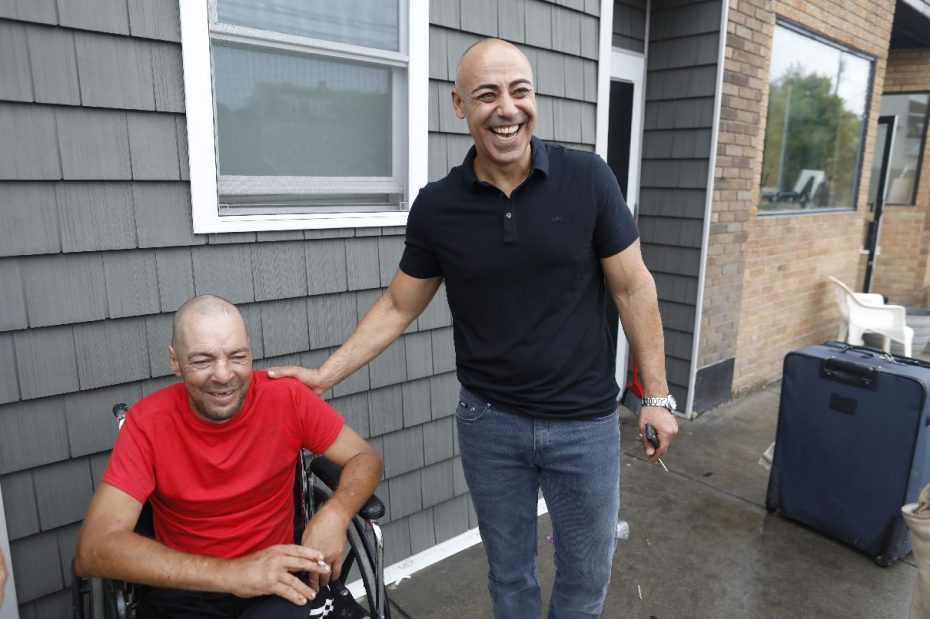 There are some issues. His wheelchair is exactly the same width of the apartment door and there's a small step from the hall into the apartment, so mobility remains a challenge. He has yet to get in touch with the medical personnel who would make a prosthetic leg for him. And Haseley said he spends much of his $50 weekly allowance from county Adult Protective Services on beer. Social Services manages his benefits and decided to limit him to that amount. The county shelter allowance is paid directly to the landlord.

"Part of the money we collect from the rent, we give it back to the people (for) housekeeping, clean for them their apartment once a week, because we took the weakest people," Cohen said.

What else has Cohen had given him?

"Pretty much everything," Haseley said.

That includes advice. Haseley recently accepted Cohen's suggestion that he shave his head.

"Have I ever taken from you some money?" Cohen asked Haseley. 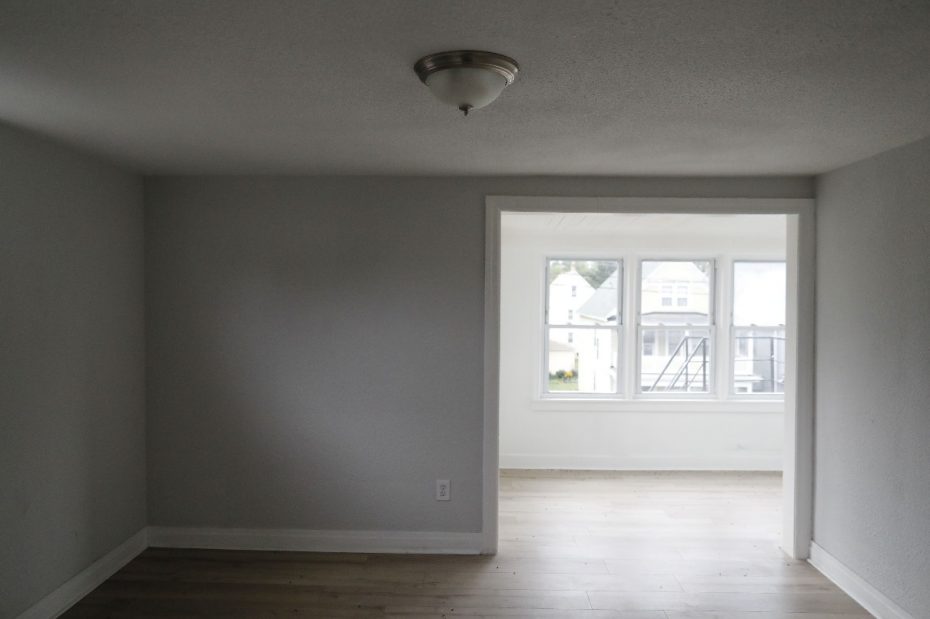 Cohen accepts tenants with mental and physical disabilities. He provides appliances and gives them used furniture from his warehouse. He sends a cleaning service to individual apartments once a week. He's also making plans to bring in mental health caseworkers from a Buffalo agency to assist tenants.

"I like it here," said Katie, a mentally disabled woman who sat smoking on a wheeled stool on a Ferry Avenue sidewalk in front of the third Cohen apartment she's lived in this year.

"You have everything you need?" Cohen asked the woman.

"Everything I need," Katie said.

"If she don't have the cigarettes, she's gonna be stressed," Cohen explained. "She's gonna knock on people's doors and ask for cigarettes."

No absentee landlord, Cohen lives in central Niagara Falls. He and Finkas, a renovation and construction specialist from Buffalo, seem to be on a first-name basis with all their tenants.

"We somewhat stumbled into this," Finkas said. "We take care of people that basically society forgets about. We're trying to actually steer resources toward these people because they're not getting the proper resources they deserve."

Cohen and Finkas say they are making plans to turn a former church Cohen recently bought on Niagara Avenue into a job center for his tenants. One idea is to have them make keychains.

"Small stuff, like keychains. They're going to come in the morning and" – suddenly Cohen started shouting – "have purpose to their life!" 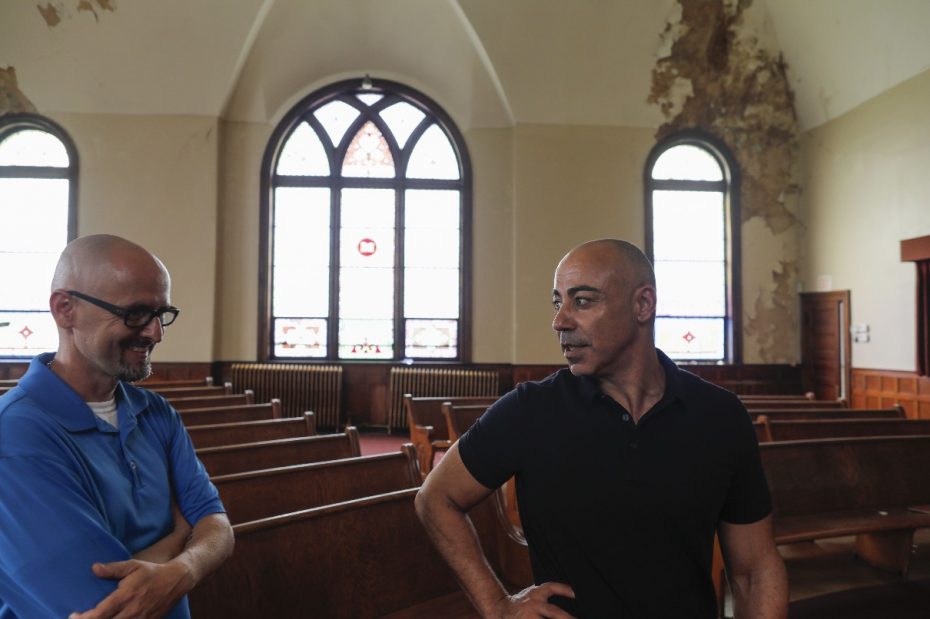 Rene Finkas, left, and Eyal Cohen have purchased and rehabbed over 20 properties in Niagara Falls with plans to do more, including a church on Niagara Avenue they recently acquired. (Derek Gee/Buffalo News)

Referring to Katie from Ferry Avenue, Cohen said, "She's sitting outside and she can sit like this all day. And then she go to sleep. And then she wake up. What kind of purpose does she have in her life? She's breathing. This doesn't mean that she's alive. If she wakes up in the morning, she can do some small stuff for four hours. This is going to fill a need."

Talking even louder, Cohen said, "She needs to go somewhere, keep her busy! And you keep people busy, they're not gonna be in the street!"

Cohen concludes by asking, "Why not give them something? It's only money."

Cohen recalls how he was advised not to leave Israel.

"My mother and father didn't want me to come to the States," he said. "It was an adventure. I like adventure. I come, I start, I try to open a restaurant in New York City, I lost all my money, I start to wash dishes in a basement. And up, up, up the stairs. This is America. There is a ladder. You go up the stairs. You can make money. You need to work. When you have everything, what do you need to do? Give back to the community. You have money, it doesn't matter. What are you gonna do with your money? This is the question.

He said he retired at 35 and tried a life of world travel and luxury. He hated it.

Cohen said he, his wife and four children moved to Niagara Falls 18 months ago "because of the potential."

Cohen, who is now a U.S. citizen, says he takes a small salary from his company and lives "on my personal money."

"Rich in my heart," he replied.

He said he wants to pattern himself after billionaire philanthropists like Warren Buffett and Bill Gates who have donated their fortunes to worthy causes.

"You come to a point in your life that if you have money, you're not gonna be excited for money," he said. "It's just a profit. You buy, you sell, OK, you have money. So what?"

Cohen's track record so far and what he says of his plans have Niagara County officials intrigued.

Officials from the Police Department and the Community Development Department said they have heard no negative reports on Cohen.

He doesn't even challenge the assessments on his properties.

"I will pay the tax for the city," Cohen said. "I don't care. But do something good with my money. They need to invest in the neighborhoods."

One of Cohen's acquisitions is the former Niagara Rescue Gospel Mission on Ferry Avenue.

"He did a great job in fixing that place up, and his intention there was to actually provide housing for older people who needed it, who may find themselves homeless," said Restaino, the social services commissioner.

"Obviously, we would be interested in whatever he can do, because that ultimately helps us as it relates to moving people off cash assistance," Restaino said. "Plus, if he's able to get them to feel that they have some self-worth, that's a positive too for the city."