Dr. Orville T. Beachley Jr., a University at Buffalo chemistry professor, liked to start his first class of the semester with a fresh-cut rose from his wife's Snyder garden and a block of dry ice.

"In the beginning of each semester, he would always do a demonstration to get the students excited about chemistry," said his daughter, Jennifer B. Harty. "He'd put the rose in the dry ice and then take it out and drop it on the ground and it would shatter."

His daughter said, "He loved teaching and he wanted others to appreciate chemistry. He wanted to do anything and everything he could to help students succeed if they wanted to succeed. If he thought you were willing, he would be happy to help."

He was born Nov. 8, 1937, in East Orange, N.J., the son of Orville T. and Mabel (Williams) Beachley and older brother of Betsy and Virginia.

Dr. Beachley's father was a businessman and the family moved several times during his childhood. He attended elementary school in Lake Charles, La., and high school at St. Paul’s School in Baltimore. He graduated with honors from Franklin & Marshall College in Lancaster, Pa., in 1959, and earned his Ph.D in Chemistry from Cornell University in 1963.

It was while he was a graduate student at Cornell that Dr. Beachley met Inez Parker, an elementary education student at Millersville State College in Pennsylvania. He and a buddy were looking for dates for an alumni event at Franklin & Marshall and posted a notice titled "Dates Wanted" on a Millersville College bulletin board. After Dr. Beachley followed up the pleasant weekend with a Halloween card, the two became a couple. They were married on June 23, 1962, in her hometown of Mifflintown, Pa.

The Beachleys lived in England in 1963 and 1964, when Dr. Beachley was a National Institutes of Health postdoctoral fellow at the University of Durham. During that time, they traveled extensively, visiting other parts of Europe, Scandinavia, the Middle East and northern Africa.

Dr. Beachley joined the faculty of the chemistry department at the University at Buffalo in 1966. He loved teaching undergraduate classes as well as graduate students who worked in his research lab.

Dr. Beachley was actively engaged in research throughout his career, including work on projects funded by the Office of Naval Research. On his faculty page, he explained his work as researching "interesting but important new compounds with the potential to make new electronic materials or to solve problems identified as being significant to the formation of useful materials such as semiconductors."

Through his research, he discovered a new chemical compound in 1993, and was granted four U.S. patents for his inventions related to semiconductors.

Dr. Beachley was awarded multiple research grants, and his work in chemistry was widely published. He co-authored a lab manual and an inorganic chemistry textbook that is still being used in classrooms today.

At UB, he was the Director of Graduate Studies for the chemistry department. He also served as the associate vice president of research for the University. In 1975, he received the Chancellor’s Award for Excellence in Teaching. In 1996 he was chosen to be an Honorary Member of the Golden Key National Honor Society, UB Chapter, nominated by students for his teaching and support of undergraduates. 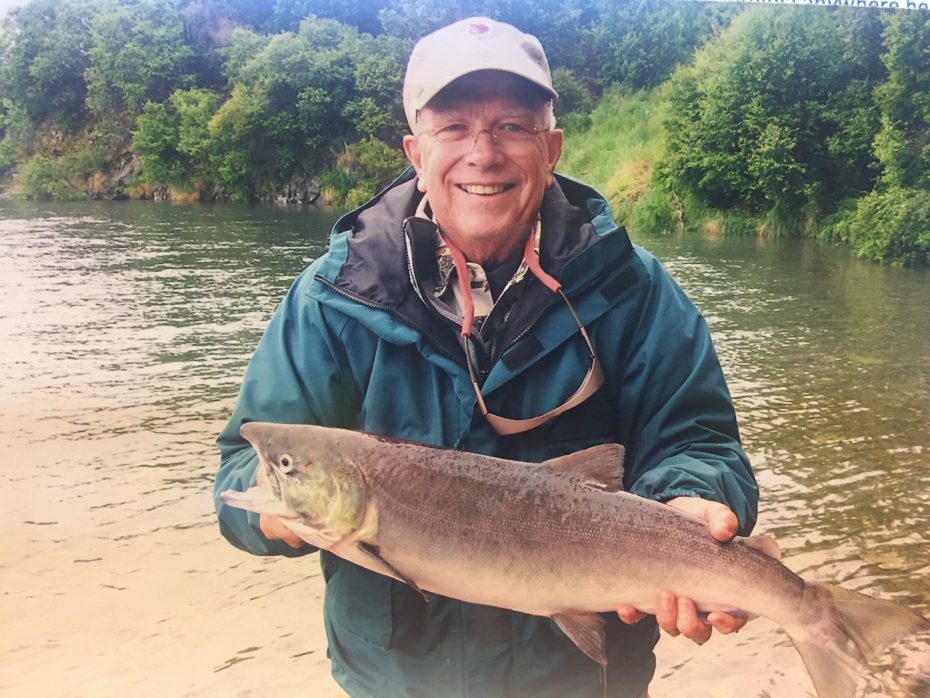 Orville T. "Ted" Beachley shows off a rainbow trout he caught on a trip to the Rainbow King Lodge in Alaska. Dr. Beachley enjoyed fishing on lakes, rivers, streams and the ocean.

Dr. Beachley loved fishing and being on the water. He started fishing as a boy in Louisiana and throughout his life enjoyed fly-fishing on small streams, deep-sea fishing in Florida and freshwater angling on Lake Erie and the Niagara River. With close friends and his son, Andrew T., he took many fishing trips over the years to Northwest Canada, Alaska, New York, Pennsylvania, Maine, Florida, North Carolina and Virginia.

His family said Dr. Beachley was a devoted family man and a good friend to many, always supporting and encouraging his wife, son, daughter, family and friends. His family said said his life was characterized by "a strong sense of loyalty, goodness, generosity, honor, thoughtfulness, integrity, kindness and love for others."

He retired from the University at Buffalo in 2002.

Dr. Beachley was an active member of Christ United Methodist Church for more than 50 years, serving as head usher for decades. He was also a member of the Masonic Lodge.

Besides his wife of 56 years, his son and his daughter, Dr. Beachley is survived by three grandchildren and two sisters, Betsy B. Winger and Virginia B. John.