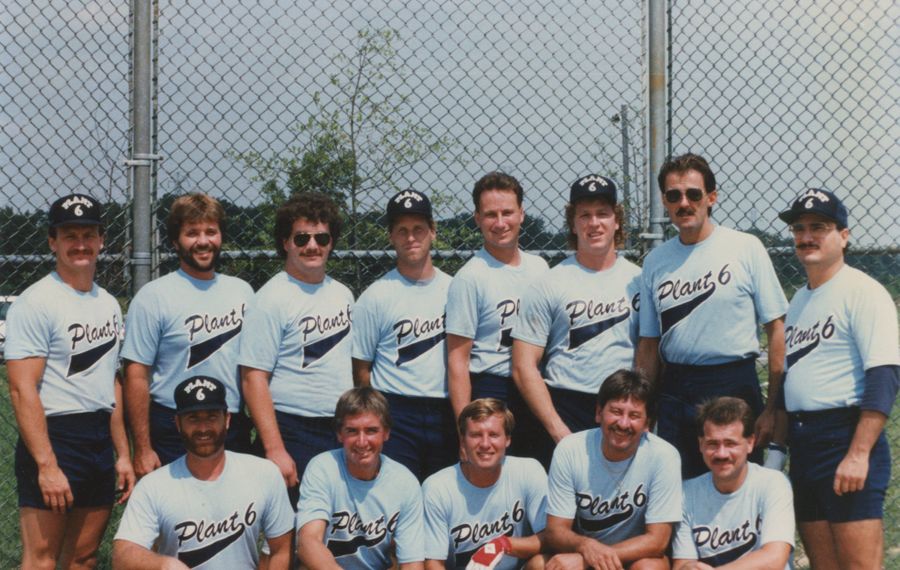 They were a longer-running success than "Cats" or "Phantom of the Opera" or the New England Patriots.

If they liked the way an opposing player performed, they would try to sign him. That would be tampering in Major League Baseball.

The Plant 6 slow-pitch softball team may have been the most successful and enduring sports organization ever in Buffalo.

Led by player-manager Dave "Bear" Niemann, Plant 6 won more than 200 tournaments starting with the team's founding in 1978 and its final season in 2007.

About 50 players from the more than 100 who swung a bat for the team over the years recently gathered for an informal 40th-year reunion at the Snyder Grille on Kensington Avenue in Amherst to recall proud moments and tell war stories from those long weekend trips.

Plant 6 was born when Niemann and Art Kargen merged two of Buffalo's best teams to create a single powerhouse out of Niemann's tavern, Plant 6.

The group evolved into strictly a tournament team, competing in top-level slow-pitch play nearly every week from Memorial Day to Labor Day. Over the years, Niemann's team played in 450 tournaments, winning 208 and finishing second or third 72 times.

"It's something you couldn't possibly have now," Niemann said. "There are so few tournaments and you have so many other activities and interests that young guys won't commit to the long schedule."

It was not just a long schedule. There were plenty of long weekends. Once Plant 6 had to play nine games in two days to win a tournament in Alden, finally triumphing at midnight on a Sunday.

"You have to want to commit to playing tournaments 10 weekends in a row," said Benji Bluman, a Greater Buffalo Sports Hall of Fame member and the team's longtime shortstop.

Niemann never played high school baseball but initially got interested in softball when he played on a championship fast-pitch team while serving in Vietnam. He switched to slow-pitch when the Plant 6 team he sponsored was formed in 1978.

Niemann, who was a catcher, is the only one who played all 30 seasons and never missed a tournament.

Top-level slow-pitch is a longball game usually dominated by beefy and muscular sluggers. Plant 6 had its home-run sluggers such as Rick Evans, Niemann and Ron Martinez, but prided itself on playing with speed, athleticism, good defense and correct fundamentals.

Perhaps the best of all the Plant 6 athletes was Bluman's replacement at shortstop, Greg Rogers.

"He's the best shortstop ever," Niemann said in an interview with The Buffalo News in 2004. Rogers was still playing the position in his late 40s. "He makes plays other guys wouldn't dream of. He gets to every ball."

SOFTBALL: THIS THING OF OURS

In 1978, playing under the Plant 6 banner, a team that included players from the powerful Locker Room and Arcade Hotels, won eight of 12 tournaments, the most in upstate New York and nearby Pennsylvania.

The team played as many as 90 tournament games that season. Evans hit 28 home runs and drove in 120 runs. Martinez hit 19 homers, Niemann 15 and Jim Dzwigal batted .531. Two members of that first team, Don Mack and Ron Raskin, have passed away.

After that start, the team was bolstered by the addition of star players interested in as competitive a brand of ball as you can find. Soon, the team grew too powerful for league play in the Buffalo area and was not welcome.

The tournament schedule expanded. Over the years, Plant 6 traveled to Canada and all over the East Coast and to ASA World Championship tournaments in Kansas, Michigan, Indiana, Florida, Georgia and Alabama. Plant 6 took second place in the 1996 World Tournament in Montgomery, Ala. One year, they were ranked sixth in the country.

There was a constant infusion of new talent from year to year. It came by word of mouth and by inviting top players from opposing teams to sign on.

"That's how we got guys like Larry Garbo, Dave Hauser and Mike Dugan," Bluman said.

In the final season,  2007, the team entered five tournaments and won all five.

A winner right to the finish.