Dominic S. Telesco was an Erie County official when he embarked on a second career that made his face familiar throughout the Buffalo area and beyond.

It began the night that he and his wife saw their son, Kenneth, then a theater major at the University at Buffalo, perform in a community production of Peter Shaffer’s play, “Equus,” in the early 1980s.

After the show, Kenneth recalled, the director told his parents that he was always looking for supporting cast members, adding, “You should come and audition.”

“My father said sign me up,” his son said. “That was his attitude in life. He was very fearless.”

Mr. Telesco not only auditioned, he got an agent. Before long, he was appearing in newspaper and magazine ads, on billboards and in television commercials locally, nationally and internationally. In a series of sports-themed billboard ads for the bank Empire of America, he was the referee. 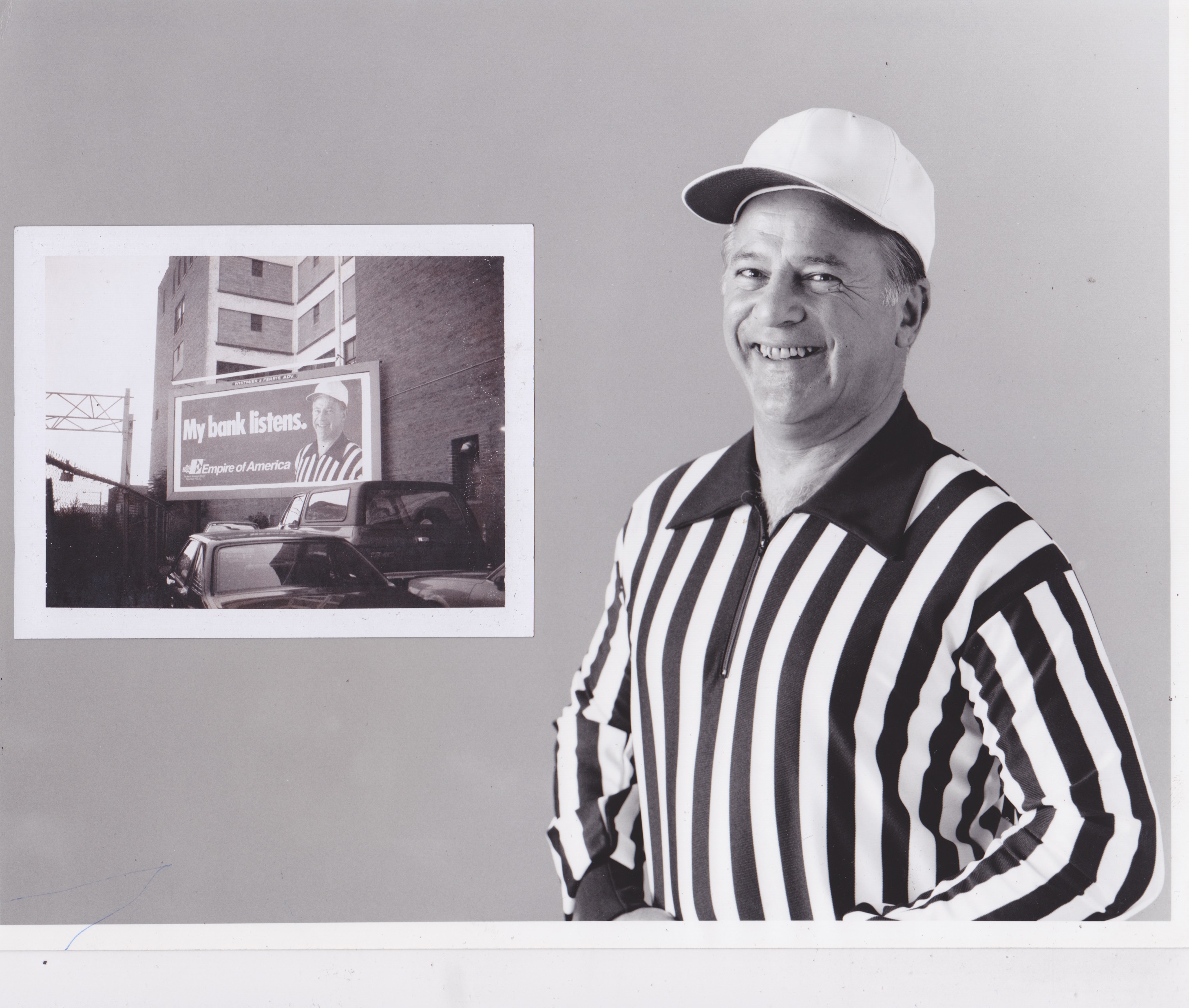 Dominic Telesco as a referee in a billboard advertising banking at Empire of America in the 1980s.

On Tuesday, Mr. Telesco died in Harris Hill Nursing Facility, Clarence, after a period of declining health. He was 86.

He had appeared in the locally filmed movies “Vamping” and “Buffalo 66,” in which he played a prison guard.

He also had supporting roles in numerous productions at the Studio Arena Theatre, Shea’s Performing Arts Center, the Lancaster Opera House, the Kavinoky Theatre and the Alleyway Theatre.

“He was a great character persona,” his son said, “and he was good at making faces.”

Born Domenico Salvatore Telesco in Buffalo, the youngest of four children, he grew up in the Lakeview Projects on the Lower West Side and attended School 1 and Grover Cleveland High School.

Mr. Telesco's father died when he was 15 and he left school at 17 to join the Marine Corps. He was aboard a ship bound for the Korean War when his mother, Carmella, an Italian immigrant, intervened to keep her only son from going into combat. He served stateside, attaining the rank of corporal, was discharged and then recalled for more stateside duty.

He returned and married Sarah Guarino in 1952, worked at Twin Industries and Texas Oil Co. and earned an associate’s degree in business administration and accounting from Bryant and Stratton Business Institute. He then was an insurance agent for Metropolitan Life for eight years and became a right-of-way agent in the Erie County Attorney’s Office.

A 24th Ward Republican committeeman, he ran unsuccessfully for an at-large seat on the Buffalo Common Council in 1963. He helped draw the lines for the new County Legislature districts in 1966.

Before he retired in the early 1990s, he taught real estate appraisal classes at Erie Community College and gave training courses for assessment officials.

He remained active until earlier this year with the Erie County Employees Credit Union, where he was vice president and member of the board of directors.

In the 1960s, he attained black belt status at Manson’s Judo Club on Niagara Street and taught judo classes there. He taught self-defense to Erie County government’s women employees.

A boating enthusiast, for several years he was a member of the Coast Guard Auxiliary and served as an area chairman for National Boating Week.

He also was a musician. As a child, he learned to play a violin his father gave him. Later he played the drums and was a member of the United States Marine Drum and Bugle Corps in Washington, D.C.

Mr. Telesco studied classical guitar with Oswald Rantucci. He also played the flute and, in later years, the harmonica. He taught harmonica to children and adults in the Williamsville schools and played with a band of seniors who entertained at nursing homes.

In the 1980s, Mr. Telesco and his wife founded the Center for Reuniting Families, a nonprofit search service that helped dozens of people nationwide locate their lost relatives. They were featured in an episode “Unsolved Mysteries,” the TV show which originally inspired them to start the service.

He also was a co-founder and past president of the Grover Cleveland High School Alumni Association.

He and his wife, who is a retired utilization and review clerk for Erie County Medical Center, would have celebrated their 66th wedding anniversary on Sept. 6.

All three of their children found careers in the arts. Their daughter, Paula, is a professor in the Music Department at the University of Massachusetts Lowell. Their son, Kenneth, is an actor and dancer based in Seattle. Another son, Robert, who died in 2001, was a rock and country musician in Tennessee.