Even as Pawtucket’s Tzu-Wei Lin stepped up to the plate Monday – the first batter in the final Buffalo Bisons home game of the season – seat 9 in section 110, row W, remained empty.

That was unusual, but Stuart Boeckel, in seat 10, did not seem worried. He pulled out the headphones that allow him to listen to play-by-play and the powerful glasses that filter out bright lights above the field.

“Maybe he fell asleep,” Boeckel said of Sean Simms, the friend who always sits with him. “That happened one time.”

He meant it. That happened exactly once in the last 20 years or so, when Simms took a nap and woke up late for his bus. Typically, Simms shows up well before the first pitch at each of the 64 home games that make up part of a Bisons' season.

Indeed, Dash Richardson, clerk of the team store, said Boeckel and Simms are often the first ones in when he unlocks the door.

“They’re legends of the ballpark,” said Glen Ufland, one of the head ushers in the soon-to-be-renamed Coca-Cola Field.

Before long, Simms came down the aisle, his Bisons cap thrown on backwards. He fist-bumped with nearby fans and staff, then settled in.

“I’m here,” he said to Boeckel, who gave him a quick nod.

Simms, 46, explained that he was a little late because he had been to the ballpark’s party deck. He looked beyond right field, toward the group of revelers he left behind. Simms, sipping a soda, raised his arm. From that faraway throng, a woman in the crowd raised her hand in response. 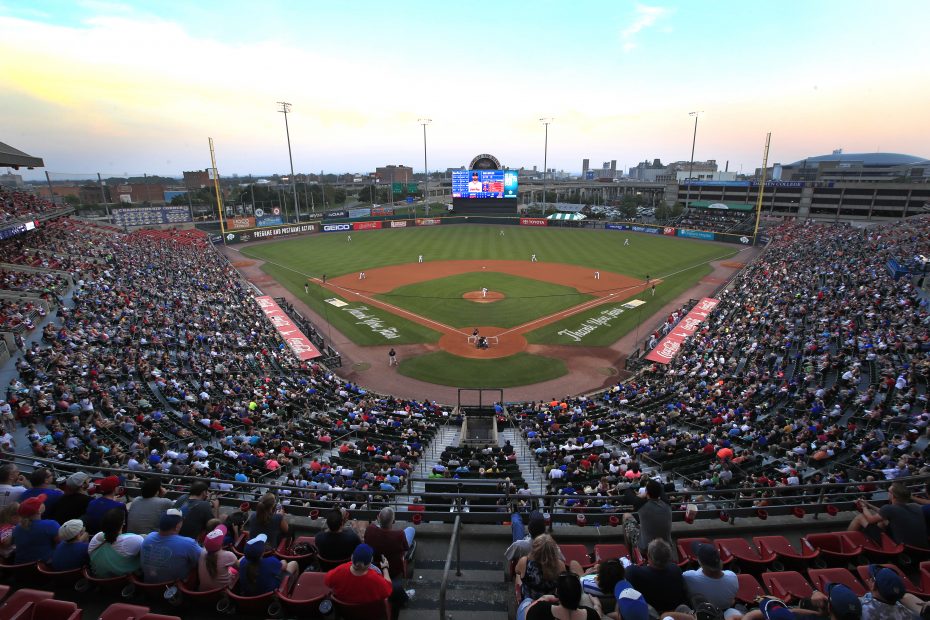 Mike Buczkowski, Bisons general manager, said Boeckel has been a regular since the days when the team played at the old War Memorial Stadium. Boeckel's sister, Holly Allen, said he has twice thrown out a ceremonial first pitch before a Bisons game, and the club held parties for him on his 50th and 60th birthdays.

Ufland cannot imagine the place without Boeckel and Simms, who sit in the last row in of section 110, a row whose access makes it ideal for men and women with disabilities.

Boeckel, 63, is legally blind, and retired after more than 40 years in manufacturing with Buffalo’s Olmsted Center for Sight. Like Simms, who lives in a community residence in the city, Boeckel was born with developmental disabilities.

“Everyone knows them,” Buczkowski said. While Boeckel, a student of the game, loves to chat, he is lower-key by nature than his friend. Simms is more visibly spontaneous, a guy whose laugh is both unique and unforgettable.

Ufland and Rick Zaifert, a fellow usher, said Simms is also renowned for his skill in retrieving foul balls. He is a master of the way they carom down from the upper tier of seats.

Once Simms hunts down a ball, he never keeps it, choosing instead to hand it to the nearest child. The ushers will sometimes point out a boy and girl before a game, some young newcomer who would be surprised and thrilled, and Simms does his best to come through.

He and Boeckel routinely sit in Row W alongside Deidra Denise-Kelly, who jotted down a note Monday explaining that she is deaf. She has been coming to section 110 for 10 years or so, the ushers said, creating this level of familiarity:

At Christmas, she always sends Ufland a card. 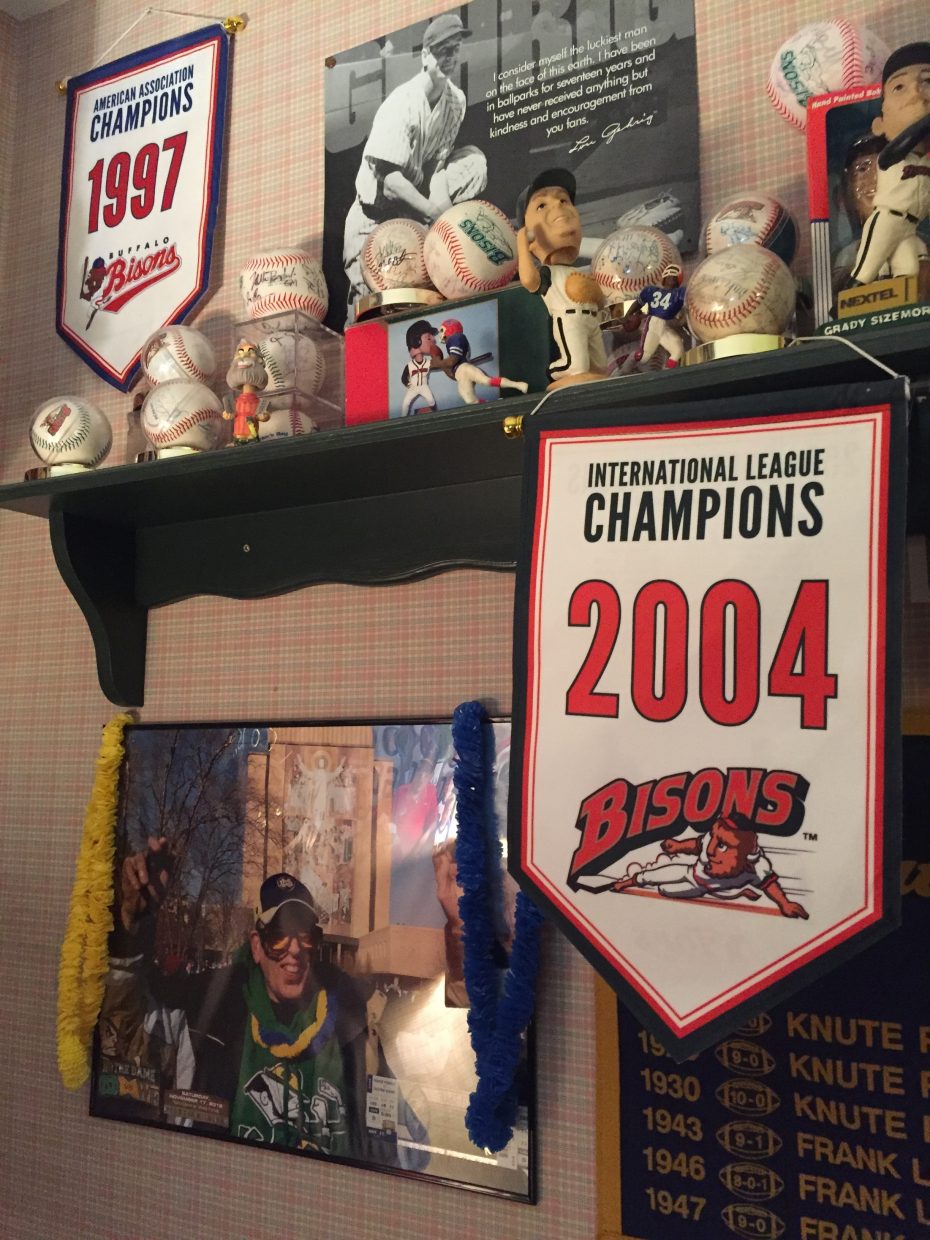 Stu Boeckel: His passion for the Bisons is on display in his room. (Family photo)

The trio is usually joined by Al Budwee, who could not make it Monday because he was playing golf in Toronto. In 2006, Budwee suffered a heart attack that kept him home from his job in retail sales, for the summer. He had time to kill, so he bought a Bisons season ticket. He met Simms and Boeckel, in line at the food stands.

Soon enough, he was sitting next to them. Budwee learned how Boeckel has spent his life in his family home, near Delaware Park. His parents both lived into their 90s, but their recent deaths – his mother, Bette, died in July – means he will be moving to Amherst in the near future to live with Allen, his sister.

Boeckel intends to continue attending Bisons games. While he always rides the bus on his way there, Budwee or Allen now give him a ride home, simply because streetlights bother his eyes. Budwee has offered to do the same for Simms, who declines. He likes the bus.

The two Bisons loyalists follow a routine. From the instant they sit down, they converse in quiet voices. Boeckel locks in on the play-by-play. While Simms enjoys the action – he was on his feet Monday when Vladimir Guerrero Jr. smashed a home run – he also keeps an eye on the world beyond the game.

Monday, he jumped up and danced when the Bisons played "It's Not Unusual" by Tom Jones over the PA system. Late in the game, his face took on an expression of wonder as he glanced toward left field.

“Look!” he exclaimed to Boeckel, pointing out a golden moon rising over Buffalo.

While both men consider themselves fans of all the Buffalo sports teams, minor league baseball remains their passion. They cannot remember exactly how they met, simply that they hit it off and were soon watching games side by side.

They have each other's phone numbers, but they said they never use them. Asked if they see each other outside of the ballpark, they said sure: Once in a while they cross paths at the bus stop, before or after games.

In other words, this is a 100 percent baseball friendship. It begins on opening day and continues until the last home game of the season, when the downtown towers cut deep evening shadows across the field.

Many ballpark regulars made a point Monday of saying farewell to Boeckel, Simms and Denise-Kelly. Lorraine Paolone of Welland, Ont., stopped over to share some hugs, as did Mary and Paul Synor, Elma residents who have owned season tickets since 1986. 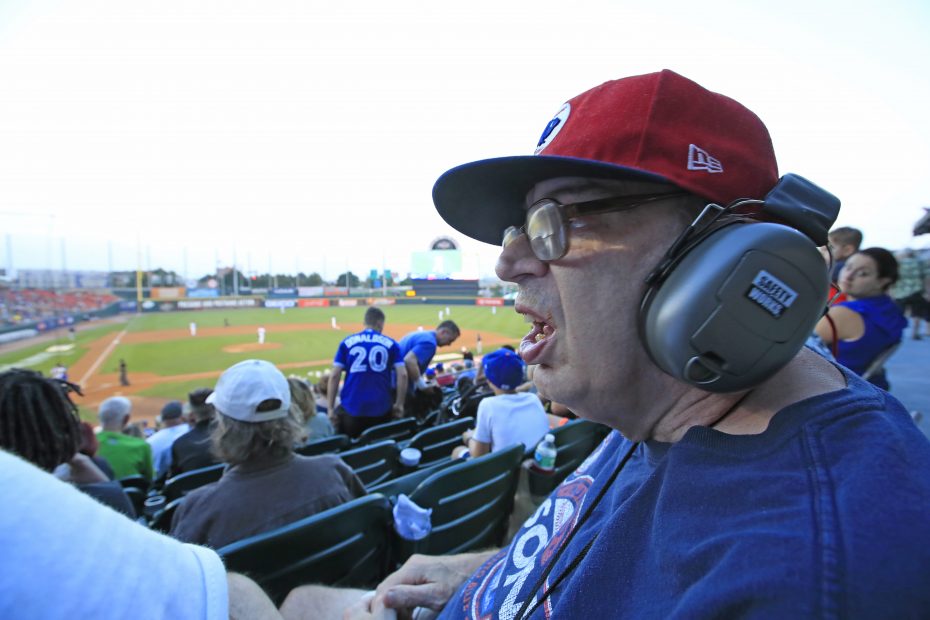 Legally blind, Stuart Boeckel follows each Bisons game both on the field and via radio. (Harry Scull Jr./Buffalo News)

She described the Bisons regulars “as one big family,” fans who come out to watch the team in all conditions. Her husband, Paul, spoke with particular admiration of Simms and his pursuit of foul balls, the way he gives those keepsakes to children and never keeps any for himself.

“Sean’s always other-directed,” Paul said, a selflessness that explains why he is beloved at the ballpark.

The moon kept rising as the game came to an end, with the Bisons losing, 4-2. The big crowd hung around for a fan appreciation video that received full attention from Simms and Boeckel, that great Simms laugh rolling across section 110 at every image of people clowning in the stands. The Bisons closed everything up with their own goodbye, a blazing fireworks display.

The two old friends watched in silence, captivated, until some inner clock told Simms it was time to go or he would miss the bus.

"See you next season," Simms said. He reached out, touched Boeckel's shoulder, then was gone.