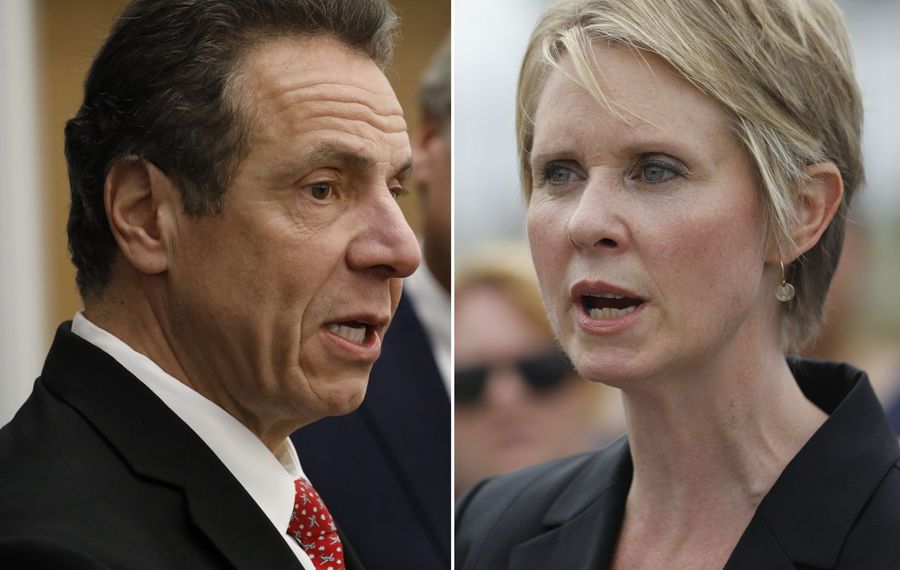 Lazio, in a debate in Buffalo against Hillary Clinton on the 2000 U.S. Senate debate, helped to scuttle his campaign when he unexpectedly walked across the stage, demanded Clinton sign a campaign fundraising pledge and wagged his finger in her face.

In his first one-on-one debate in 12 years, it would be physically challenging for Cuomo to make the same mistake – especially since he helped craft the debate’s rules and format that will have him and Nixon seated at tables covered in the same kind of dark fabric he prefers for all his government press conferences.

The debate will be the sole get-together between Nixon and Cuomo, who has spent his weeks leading up to the Sept. 13 primary offering biting criticisms of President Trump while ignoring his Democratic challenger in the state contest.

Behind in polls by as much as 30 percentage points, Nixon has little to lose.

But how she gets herself to shine, or create a situation to make Cuomo squirm or make an embarrassing public gaffe, remains to be seen in a debate format that appears incumbent-friendly.

It will last 60 minutes; will include no traditional opening or closing statements; is being taped and not shown live as the debate occurs; and will be broadcast later on what is forecast to be a hot summer night at a time when many voters, especially parents who are readying their children for the start of school, might not be paying much attention.

The debate is being hosted by Hofstra University, but officials there this week would not release the full set of rules or format for the debate.

For the Nixon campaign, which has previously said Cuomo controlled the debate rules, that’s not surprising. “None, zero," Lauren Hitt, Nixon’s spokeswoman, said when asked what input the activist’s campaign had in the debate format.

“Cuomo negotiated this entirely to his liking. He got exactly what he wanted," Hitt said, checking off the various rules, including jettisoning of the usual opening and closing statements in a debate and the much-photographed moment when candidates walk onto a stage and greet each other with a handshake. Family members, as of Tuesday, weren’t being allowed on stage for the usual post-debate hugs and kisses, the Nixon campaign said.

“When the debate opens up both candidates will already be seated. So, the classic moment when candidates shake hands, that’s not happening. It’s a little reminiscent of Zephyr Teachout when Cuomo didn’t shake her hand," Hitt said of the moment, captured on video, before a Labor Day parade in 2014 when Cuomo would not greet Teachout, who was running against him in the Democratic gubernatorial primary.

The Cuomo team mocked the Nixon campaign’s pre-debate claims, though it did not dispute them. “The Nixon campaign thrives on paranoia and melodrama, and these silly accusations are more of the same," said Lis Smith, a Cuomo spokeswoman.

“They can debate about debates, but the governor is focused on having a substantive, in-depth discussion about the issues facing New York,’’ she added.

Who has an edge?

The debate will be taped at 5 p.m. Wednesday by CBS2 and shown at 7 p.m. on CBS affiliates across the state.

The Cuomo campaign appeared to try to give Nixon some kind of pre-debate advantage because of her experience as a longtime television and movie actress. It noted she is “comfortable delivering lines and performing in front of live audiences."

“This is the performance of a lifetime and we expect her to deliver," the Cuomo campaign said in what it called “background” material for this article.

Cynthia Nixon: Cuomo is bad, but better than Molinaro

Cuomo, in politics in one form or another for more than 35 years, is accustomed to hand-to-hand political combat, but much of it has been conducted behind closed doors, such as during budget talks with lawmakers at the state Capitol. In past gubernatorial campaign debates, Cuomo has steadfastly embraced a format featuring a stage packed with major and minor party candidates as a way of providing physical and rhetorical distance from his chief opponents.

For her part, Nixon has never been in a debate before – including going back to her school days, her campaign said.

One communications consultant, who specializes in teaching about messaging and delivery to business executives, celebrities and politicians, said Nixon’s acting background will be apparent in the debate. “As an actress, she is well-trained in the performing arts, and this debate is a public performance," said Ruth Sherman, who is based in Connecticut and has not advised either campaign.

Sherman said the short time period for the debate and its format will pose a particular challenge for Nixon, who will be introducing herself for the first time to many voters.

The consultant said Cuomo has a reputation as “not a likable public official” with a voice that can get “annoying," she said. Nixon, on the other hand, has already proven a comfort level with the ability to look directly into a camera, which Sherman, a former faculty member at the Yale University’s Women’s Campaign School, will benefit the Cuomo challenger if she can resonate with voters.

Nixon, Sherman said, has two distinct voices that she taps for different uses: commercials versus interviews or events. “She can soften any kind of aggressive positions that she takes with her voice and her nonverbal communications. I don’t think Cuomo’s capable of that," Sherman said.

Cuomo’s advantage over Nixon is his political and government experience – giving him entry to a range of subject area knowledge about New York that the campaign neophyte doesn’t always show. “He’s been in the trenches for a very long time and at high levels," Sherman said. “He can speak fluidly and fluently without a lot of ahs and ums.”

The consultant said the sitting – rather than standing at a podium – makes for a less formal event, which she said may be Cuomo’s desire. Standing, the two would both appear to be about as tall as each other. A seated debate arrangement could help Cuomo try to show dominance, she said. “He may also want to show he’s relaxed and that this isn’t all that important to him, which is what the less formal, seated position, could convey," Sherman said.

The event is not without risks to the governor.

Eric Gander, an associate professor of public argument at Baruch College's communications studies department, said Nixon, by being on stage with Cuomo, could push the governor to go too far to the left on issues – as critics say he did when he recently said publicly that America “was never that great."

“It’s an example of when a very intelligent politician feels for some reason he needs to shore up his base and goes overboard,’’ Gander, who teaches argumentation and debate courses, said of the recent controversial statement by the two-term governor.

“What Cuomo has to do is reiterate that he misspoke on that, and try not to be drawn too far to the left in this debate,’’ Gander said.

That’s a fine line, however, as both candidates have been outmaneuvering one another to claim they are the more liberal person seeking the Democratic line for the general election.

Gender considerations come into play in a one-on-one debate between a man and woman, said both Gander and Sherman. Female candidates, they said, need to portray a measured assertiveness while male candidates like Cuomo must avoid acting condescending or, like Lazio 18 years ago, somehow menacing.

The Baruch professor said the one-on-one format will provide an important takeaway for Nixon.

“This is great for her. She will get an immediate boost in terms of her legitimacy and credibility just because she is sitting next to the sitting governor of New York and they will be more or less equals for that hour," Gander said.

That, assuming no mistakes are made and Nixon performs credibly, could make some voters take her as a serious candidate, he said.

The professor said Cuomo has already proven himself as a capable debater, though largely with more people on a stage. Gander said he would be surprised if either candidate will make a debilitating error in the 60 minutes.

“Absent any large gaffe, I think that Nixon will probably get a little bit of a bump from this just being on stage with Cuomo and Cuomo will come across as a person who has done what he is supposed to do," Gander said.