A Thruway welcome center estimated to cost $20 million is trying to show there's more for visitors to do in Western New York than drive to Niagara Falls, take a selfie and leave.

The large, prairie-style building constructed along the Niagara Thruway on Grand Island is meant to draw drivers off the highway and introduce them to the history, attractions and food of the area. The regional welcome center, located off Whitehaven Road, had a soft opening Monday and hosted a steady trickle of visitors Tuesday morning.

"I said I've got to go check it out because I saw it being built every day," said Jeanne Green, a retired public health nurse who lives on the island. "It's beautiful, it's gorgeous — it's such a different building."

Influenced by the architecture of Frank Lloyd Wright, the center features photos and a historical display that showcases the area, ample seating, touch-screen information displays and a shop that sells everything from sandwiches and six-packs of beer to pickles and honey — all made in New York.

Outside, there are plaques embedded in the sidewalk honoring notable Western New Yorkers, electric car charging stations, a dog park and a small playground with nods to Niagara Falls and a historic ship.

"You feel like you're walking through the history of our region," said Grand Island Supervisor Nathan McMurray, who spent much of the day Tuesday exploring the center and holding meetings there for his congressional campaign.

Money for the project came from the second phase of the Buffalo Billion initiative, as part of an investment to boost tourism activity in Western New York. Thruway Authority spokeswoman Jennifer Givner said the authority doesn't yet have an update on the final cost of the project.

Construction began in October and wrapped up this month on the 12,400-square-foot building and the rest of the 16½-acre property. About 60,000 to 65,000 people drive on this stretch of the Niagara Thruway daily.

The state built the welcome center on authority-owned land near the Whitehaven Road exit of the I-190, between Alvin Road and the southbound lanes of the highway near Fuccillo Toyota — a site that McMurray said was a staging area and "a dumping ground" for the authority.

There are no direct ramps taking southbound or northbound traffic into the center, and there are no plans to construct any, Givner said. Instead, drivers must exit on Whitehaven and drive over to the center.

The flat lines in the wood and brick building, and the designs in some of the windows, are inspired by Wright's Prairie Style of architecture.

Outside the building, the Western New York Walk of Fame includes two residents with Buffalo ties, the late Tim Russert of NBC's "Meet the Press" and the late comedian Lucille Ball.

A playground, located behind a giant "I (Heart) NY" sculpture, has a gently sloping hill with a slide that looks like a waterfall and a ship modeled after a wooden frigate perfect for children to climb. The dog park is near the three charging stations for electric vehicles.

Inside, touch-screen computers steer visitors toward cultural sites, parks and restaurants. An E-ZPass store will be added later. The center is open 24 hours a day, seven days a week.

McMurray said an early version of the center was more "chicken wings and Bills" and he lobbied the governor and state officials to broaden its approach to the region's history and its culture.

There's a nod to Margaret Goff Clark's Freedom Crossing monument in Lewiston, a horse from the Herschell Carousel Factory Museum in North Tonawanda and a map embedded in the floor highlighting the area's attractions.

It's meant to get visitors to do more than visit the Falls, take a picture and leave, McMurray said. "It's got all these wonderful things that are here that people don't think about," he said.

The welcome center doesn't have the fast-food restaurants typical of rest stops along the mainline Thruway. Instead, Taste NY offers a variety of foods made here and across the state.

It's run by the Cornell Cooperative Extension and overseen by the state Agriculture and Markets Department. The store is open 7 a.m. to 7 p.m. seven days a week.

It sells syrup from Merle Maple Farm in Attica, Rusty Chain beer from Buffalo's Flying Bison and pickles from Brooklyn Brine Co., among numerous other items. 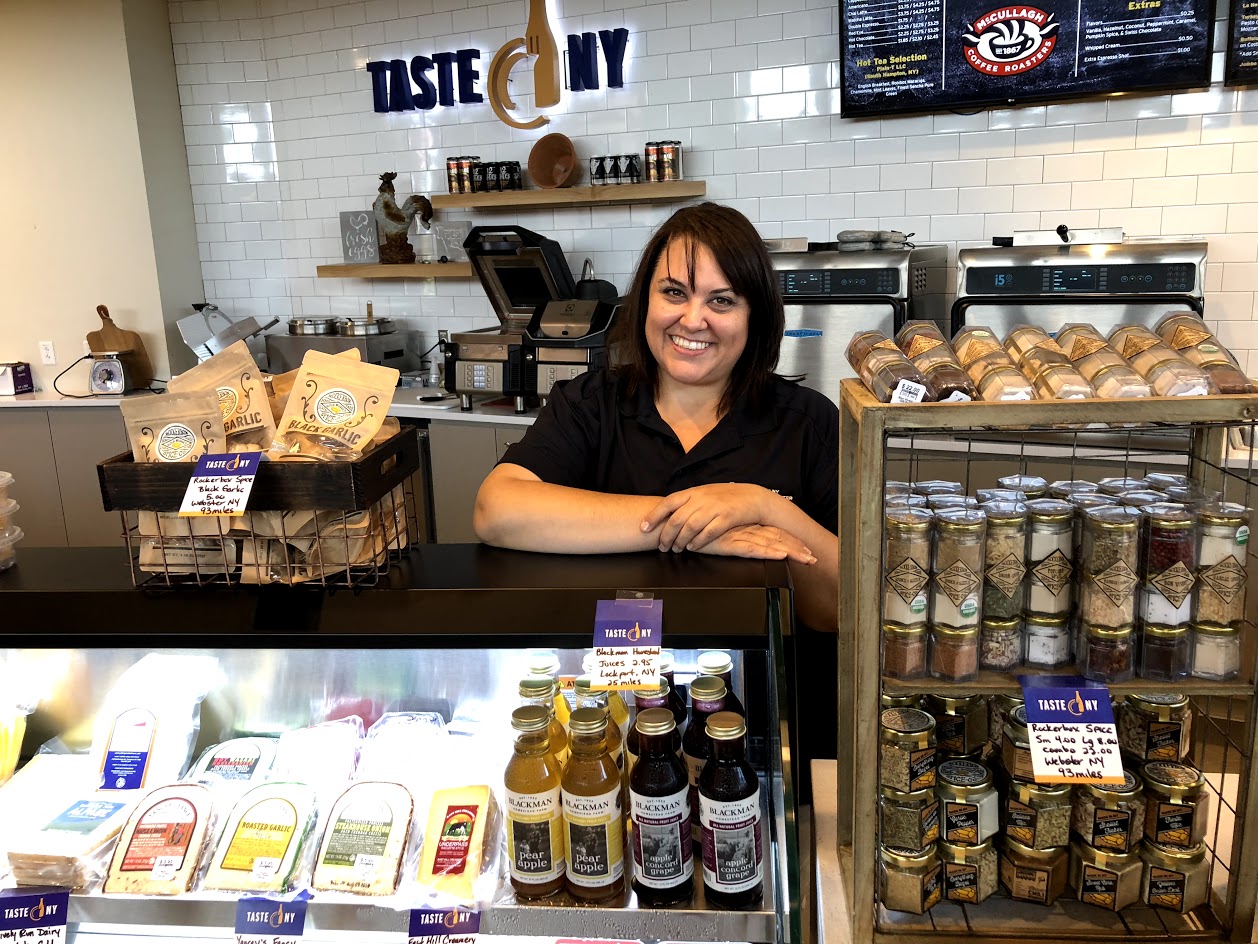 Kris Lowden, assistant manager of Taste NY, stands behind the counter of the store that is part of the Thruway's Welcome Center on Grand Island. (Stephen T. Watson/Buffalo News)

Employees plan to rotate the product mix every couple of months.

On Tuesday morning, co-owner Jenny Benz and employee Eileen Carlson from Dick and Jenny's restaurant on the island were stocking a refrigerated case with club sandwiches, turkey paninis and salads. Benz said it's meant more work for her staff but she welcomed the invitation to supply the store.

"I think it's great exposure for the area," Benz said. Carlson interrupted to say to Benz, "We just sold our first ham and cheese."

Visitors on Tuesday said they were impressed with the facility.

Jim Nawrocki, a resident of suburban Rochester who was on his way to Michigan, said he was surprised there wasn't an information booth but he loved the design.

"It's bright, airy. The different textures, the brick and the wood," said Nawrocki, who bought a cup of coffee, some pretzels and some Anchor Bar hot sauce.