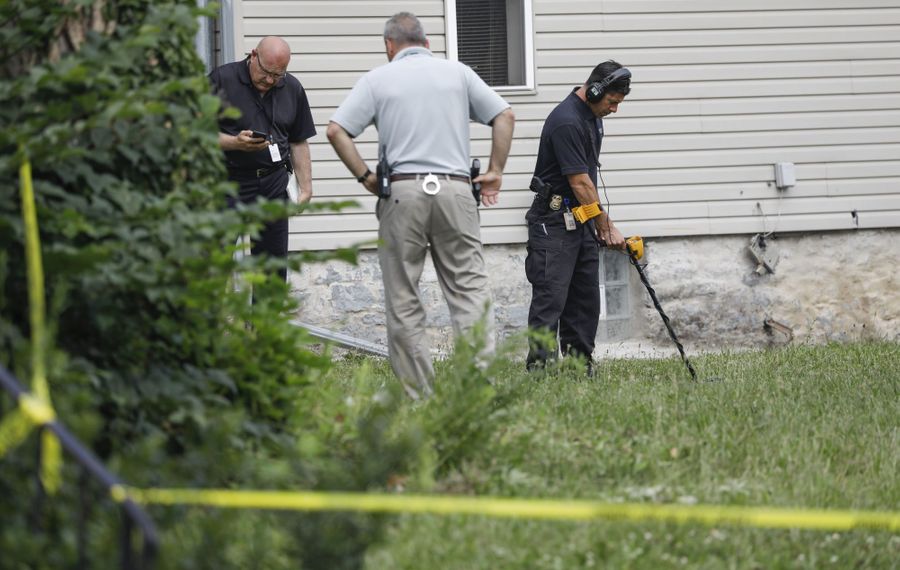 Buffalo police have seized 310 guns off the streets as of Aug. 8.

That's 30 more than in the same period last year – and without the police department's now-disbanded Strike Force unit or traffic checkpoints, which have been suspended, according to data provided by the police.

So how are police getting these guns?

Buffalo police officers are seizing "crime-involved guns," meaning not through gun buy-back programs. Some are found when police are called to a scene about a person with a gun. They're being found during routine traffic stops that lead to further investigation, said Buffalo Police Capt. Jeffrey Rinaldo.

And in some cases, defendants are offering information.

People are also coming forward "giving specific information on people that they know are carrying guns, allowing our officers to develop information," Rinaldo said. "It allows us the probable cause necessary to make those arrests."

"It's not different, necessarily, than how Strike Force did it," Rinaldo said.

But he was adamant: Strike Force is not back. Nor are traffic checkpoints.

Both are the subject of a federal civil rights lawsuit filed in June against the City of Buffalo by the Center for Constitutional Rights, the National Center for Law and Economic Justice and the Western New York Law Center.

The lawsuit alleges that the Buffalo Police Department discriminated against people of color through traffic enforcement practices, including checkpoints they said were often conducted by Strike Force members targeting neighborhoods where the majority of residents are black or Latino. The lawsuit also alleges that  the city used the checkpoints as a revenue-generation strategy "to harvest revenue from poor, black and Latino residents."

After a summer of violence that has included children being wounded or killed by gun violence, some have questioned whether the city should bring back its Strike Force.

Rinaldo, during a news conference this month, explained how the department's new strategy is different than Strike Force.

Police Commissioner Byron Lockwood has ordered additional patrols mostly in the Central, Ferry-Fillmore and Northeast districts made up of patrol officers from those districts "to reengage in the same mission that Strike Force was initially tasked with which includes proactive policing, additional patrols and making arrests for guns and gangs and drugs."

Strike Force, he explained, was made up of officers assigned specifically to that unit. The officers being assigned to the additional patrols do include some former members of Strike Force but there are many who were not, Rinaldo said.

"The mission is the same: proactive policing to combat gangs, drugs and specifically guns," Rinaldo said.

Some recent arrests show how police are finding guns.

Sometimes, they're responding to "gun calls" – reports of someone with a gun.

At about 6 p.m., police responded to a "gun call" on the 200 block of West Ferry Street, near Barton Street on the city's West Side. They reported seeing a man who matched the description of the person with a gun. Police found a firearm on the suspect, identified as Millieum Rodriguez, 18, of Buffalo. He was charged with a felony count of criminal possession of a firearm.

Then, at about 8:30 p.m., police responded to another "gun call," this time on Block Street, near Genesee Street and Bailey Avenue. Police saw a man leave a porch and reach his hand into his pocket. Police said officers commanded the man to show his hands and the man began to run, but was taken into custody. The man was identified as Aaron Joyner, 27, of Buffalo. He was charged with second- and third-degree counts of criminal possession of a weapon, second-degree obstruction of governmental administration and criminal possession of stolen property.

On Aug. 10, for example, Malcolm Wallace, 26, of Buffalo was pulled over at Edison and Easton avenues near the Kenfield/Langfield public housing complex for failing to stop at a stop sign. The police officer noticed an odor of marijuana and found Wallace was in possession of 10 bags of marijuana and a loaded semiautomatic handgun from behind the dashboard. He was charged with second-degree criminal possession of a weapon, a misdemeanor count of criminal possession of a controlled substance and a traffic ticket.

Some in the community are raising concerns about police tactics.

Members of Black Love Resists in the Rust, one of the plaintiffs in the federal suit against the police, held a march earlier this month to mourn the lives lost in the summer violence and also to protest the increased police presence.

"It seems like they are revamping business as usual which is problematic and unconstitutional and violates people's rights," said Natasha Soto, a co-founder of the group on Friday. "What we're hearing is they don't want an increase in the police force. ... People are scared of what's happening in the neighborhood, but they're also scared of the officers. Folks want to see serious investment in their neighborhood not just increasing law enforcement."

On Tuesday, Aug. 21, the newly formed Buffalo Police Advisory Board held a community forum about policing at the Frank E. Merriweather Library on Jefferson Avenue at which several people complained about tactics like checkpoints and said the police department is failing to solve homicides.

"The solution to those problems is not more police," said India Walton, an organizer with Open Buffalo who lives in the Fruit Belt. "It's not having our children stop and frisked."

Eva Doyle, a retired teacher and community activist, questioned how the guns were getting into the community in the first place. "We don't have a gun factory in the inner city," she said. "They're coming from somewhere. Locate the guns and find out the people selling them."

Yet there are others, including a former Strike Force member, who say police aren't doing enough.

A retired police lieutenant who was on Strike Force said in a letter to The Buffalo News that the disbanding of Strike Force was a political move.

"Statistically, the unit took hundreds of guns off the streets, made hundreds of arrests, and never had to use deadly force," David Wilcox wrote in a letter published Aug. 10. "The presence of Strike Force cars in a neighborhood sent gangs scattering and text messages across the city. Foot chases and physical confrontations were daily occurrences."

Politics, he contends, ended the unit.

"Some couldn’t accept the fact that we were primarily responding to violence on the East Side," Wilcox wrote. "This same violence escalates each and every summer. Buffalo will have more guns and criminals on the streets this year because there is no Strike Force."

Murray Holman of the Stop the Violence Coalition is among those calling for a return of checkpoints. He says he's been to far too many funerals this summer. "I've been to eight funerals in three weeks," the executive director of the anti-violence group said Thursday. "They're not just for young men. It's women and babies."

To make sure African Americans and Latinos are not unfairly targeted, he said, police should do checkpoints across the city.

"Do it at Canalside and see," he said. "We have gotten guns out of Canalside. Why should it be exempt? It's all the City of Buffalo."