The human ear most often holds the key to dizziness, so it may sound strange that two new pairs of high-definition goggles can help unlock the course of treatment for the most common balance challenge: positional vertigo.

The Kenmore Mercy Hospital Foundation recently gave $2,500 to AthletiCare so two physical therapists at the Catholic Health clinic can use a new Otonetrics-Audiology System to diagnose vertigo by magnifying and measuring rapid eye movements during dizzy spells.

“A lot of people don't know physical therapists can help with dizziness,” said Anne Schukraft, who, along with Matt Clemens specializes in vestibular treatment as part of her general PT duties at the Town of Tonawanda center.

The vestibular system is the labyrinth of the inner ear that helps set the sensory tone for movement. If things churn up here, the wrong signals can be sent to the eyes and feet – and fool the brain into thinking you're moving when you're not.

A discombobulating case of vertigo creates a dizziness more extreme than the spinning that can come from drunkenness. Even placing a foot on the floor does no good.

“You can see why most people go to the emergency room,” Schukraft said.

She and Clemens – Western New York natives who each have practiced for more than two decades – have shared word about the new goggle system with emergency room staff at nearby Kenmore Mercy Hospital. They also want primary care doctors and the public to know that physical therapy can treat positional vertigo better than medications generally prescribed in health care settings.

Q: What interests you in vestibular treatment? 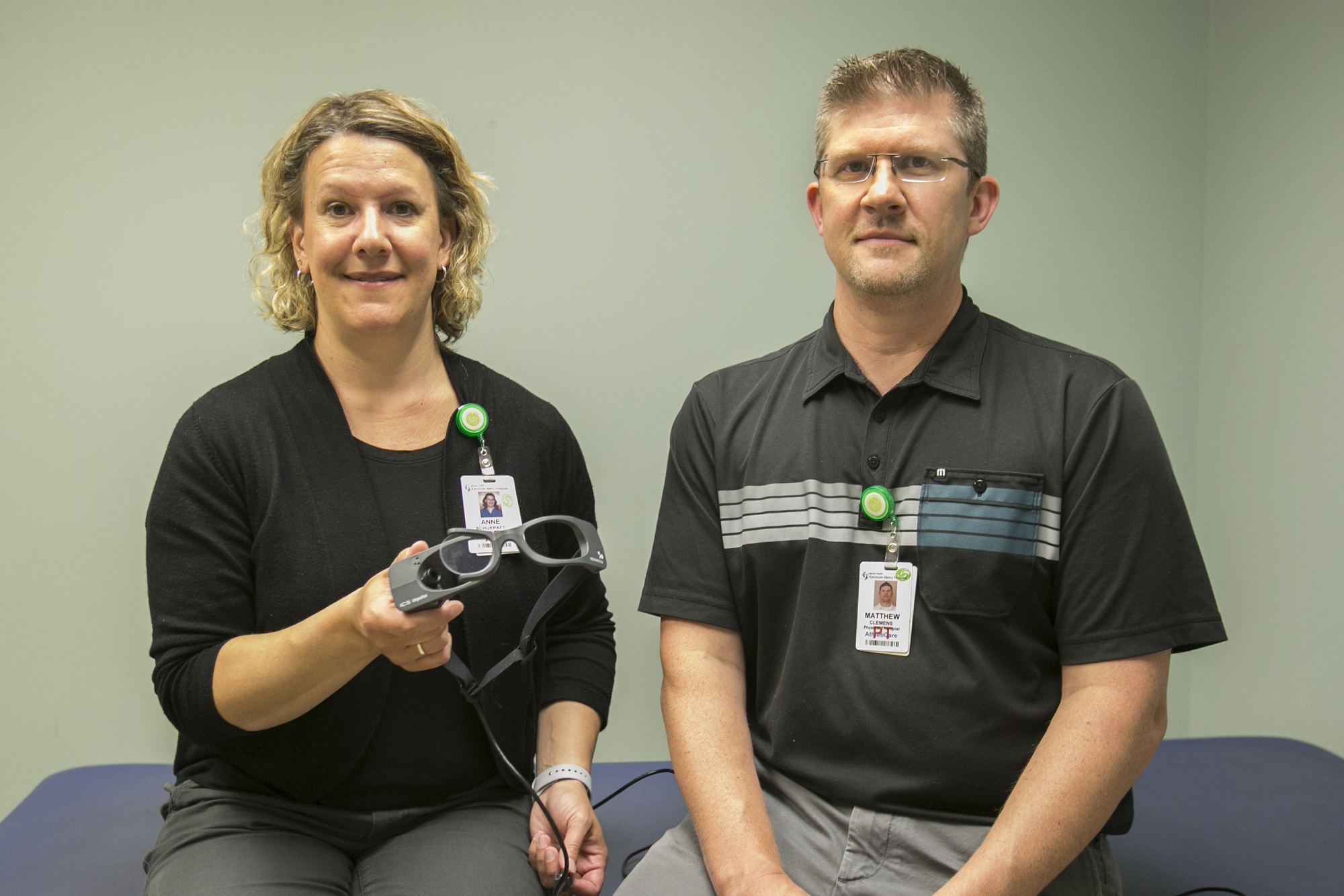 AthletiCare physical therapists Anne Schukraft, left, and Matthew Clemens want doctors and others to know that they can help treat those with positional vertigo without medication. Roughly 65 percent of those they treat for dizziness have it. (Shuran Huang/Buffalo News)

Schukraft: I like it because it makes an immediate impact in people's lives. When people are dizzy, they have such a loss of function. It's so debilitating and they are so fearful. With most cases, in just a couple of visits, we can make a significant impact.

Q: What are the most common causes dizziness?

Clemens: The most common is Benign Poroxysmal Positional Vertigo, or BPPV. There are calcium crystals that line the inner wall of the vestibular area and some of those crystals can break off and tend to fall into of the two canals in the bottom of the ear, the posterior and the horizontal canals. It's like a tube of fluid. Every time the patient puts their head within a line of gravity, those crystals, like in a snow globe, are going to move. When they move, that stimulates the little nerve cells within that tube to tell your brain that there's movement when there isn't. Your eyes are having a reaction to that.

Dizziness also can follow an ear infection. It can follow a trauma; say someone is in a car accident and hits their head on a steering wheel. Many times, the cause is unknown.

Schukraft: People who've had a stroke in a certain part of the brain can have dizziness. Those with concussions. People who fall can start having dizziness afterward and that can lead to more falls. If you jar your ear or hit your head in a part that is involved with balance, that can often make people dizzy. And it’s is probably one of the biggest side-effects of most medications. Some patients are on a multitude of medications. I had one patient where we adjusted her medications and her dizziness was abolished. 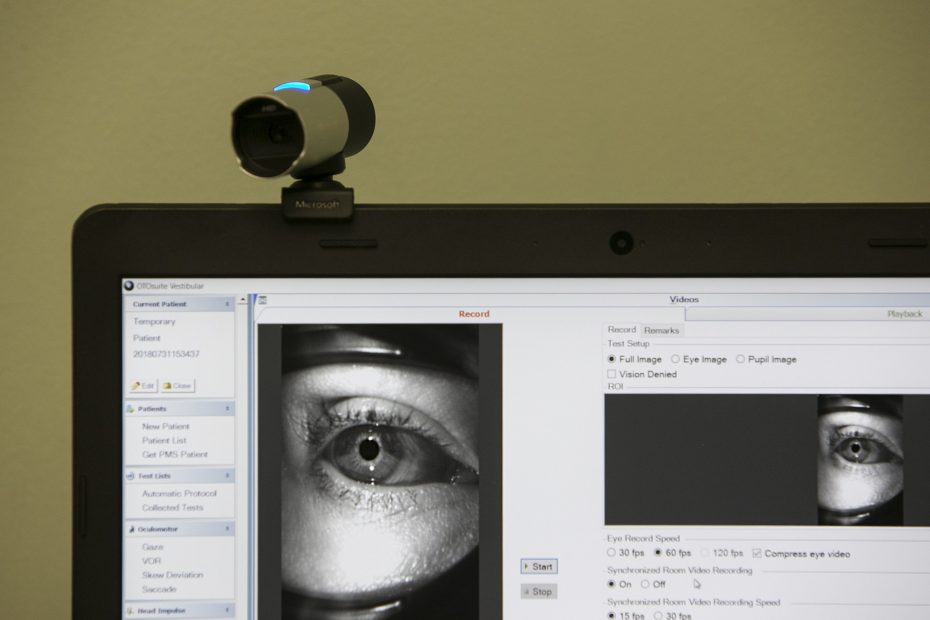 Schukraft: You lay someone down on the table so their neck is extended back over the edge. … Normally, you wouldn't see any movement, but in someone who's dizzy you would see their eye jumping quickly back and forth. That's an indication those crystals in your ear are moving in and out of place.

Clemens: The direction of the eye movement tells us where the crystals have loosened within the vestibular system. That affects our treatment plan.

Q: How can the high-definition goggles help?

Schukraft: The patient wears them and the camera in them will give us a better picture of their eyes, so we can see what they're doing in response to different physical therapy movements. When someone has a vestibular problem, often you'll see what is called a nystagmus – an uncontrolled movement of the eye. Depending on which way your eye may be moving, it can give us information about where the dizziness might stem from – which ear might be the problem or if it's more of a problem with the brain. The glasses and [electronically connected] screen also can give us a picture of what's happening while we're doing a [PT] maneuver.

Clemens: The common position we use is called a Dix-Hallpike maneuver to help determine positional vertigo. We'll take our patients through different movements. ... On the camera, I can watch movements in the eye during this technique … and determine what sort of movements are bringing on dizziness. That helps us come up with appropriate treatment. Both of your eyes do the same thing, so you only need to capture the video out of one eye.

Schukraft: If you're in here with a patient and you're moving them quickly, and they're getting nervous because they're dizzy, you're not necessarily getting a good look in their eye. We can record what we're doing, so if we can't see it in the room light, we can always rewind and play back the tape.

Q: You say about 60 to 70 percent of dizziness cases you test for are found to be positional vertigo, how are they treated?

Schukraft: There are repositioning techniques or maneuvers similar to the testing we do. We’re moving the head in certain directions to try to get those crystals back to where they’re supposed to be instead of free-floating in the ear.

Clemens: You’re essentially flushing them of the canal that they’re stuck in and they’ll settle back where they’re supposed to be.

Q: What percentage of the dizziness cases you see can you generally resolve?

Clemens: If it's a positional vertigo, almost all. Many times, there has been some damage to the vestibular system and someone may not fully recover. In that case, you're teaching them habituation exercise – how to adapt to movement in their environment.

Q: How long should people wait, and who should they see, if they start to develop symptoms of dizziness?

Clemens: So many people we see say, "I've been dizzy for years and just kind of let it go." Or they say, "I've got to sit here for a minute, then it goes away and I can move around." They feel like it's a part of their life and they don't have to do anything about it.

We've worked with our emergency room. Once [health care providers] rule out the big factors – stroke, blood pressure and that kind of stuff – most of the time patients are discharged with Meclizine. It suppresses the central nervous system so you're not having quite the same response from vertigo or dizziness.

Schukraft: But it doesn't correct the problem.

Q: Left untreated, what sort of damage can dizziness do?

Schukraft: In a certain number of patients, dizziness will resolve on its own but for those where it's lingering, you're running the risk of falls or isolation. People are not going to get out in the community because they're afraid of falling or having a dizzy spell when driving. It can be very debilitating to a lot of patients, and limit their ability to work or attend social functions. Falling can lead to fractures and other things.

Q: Can you talk about cost?

Schukraft: The treatment is covered by health insurance with a co-pay. A lot of patients can come to us directly without a referral from a physician. With more serious cases of dizziness, we can refer to a neurologist or ear, nose and throat specialist.

The Dizziness and Balance Support Group of Buffalo and Western New York generally meets the fourth Saturday of each month in the Kenmore Branch Library. Group meetings did not take place this summer but will resume next month. For more information, visit dizzygroup.org