The jury verdict followed a two-week trial that focused on allegations that Detective Raymond Krug and Officer Joseph Wendel used excessive force against the teen and three of his friends.

"I just want to thank all my family and friends for supporting me over these years," Krug told reporters before exiting the federal courthouse in Buffalo. "This has been a really tough time for me. It’s just nice, finally the truth comes out and I feel good about the outcome.”

"This has been brutal on us," Wendel added. "And just very happy to have such good family and friends and co-workers supporting us.”

At the core of the civil rights prosecution was the charge that Krug shot Donald J. Silmon, one of the teens, with a BB gun while Silmon sat handcuffed in the back seat of a police car in late May of 2009.

Wendel was accused of encouraging Krug to shoot again and of punching Silmon twice in the stomach. Silmon and the other teens were suspects in a drive-by BB gun shooting at the time.

The jury heard parts of two witnesses' testimony in court on Friday, but ran into difficulties later in the day.

Jurors sent a note to U.S. District Judge William M. Skretny at about 2:40 p.m. asking how should they proceed if they have reached a verdict on some charges but are stalemated on others. About 25 minutes later, a note from the jury told the judge that one of the jurors was asking to be excused and/or to speak with the judge.

The judge huddled with prosecutors and defense attorneys to decide how to respond to the notes.

Then, as the judge was just about ready to address the jury, another note arrived.

"We have reached a unanimous decision," the jury foreman wrote to the judge in a note received in the judge's chambers at 4:38 p.m.

After the jury foreman read the verdict on the final of the four counts, the crowd of about 50 supporters of the officers burst into cheers and applause. Many in the crowd became emotional, some wiping away tears. Defense attorney Rodney Personius got up from his seat and hugged Wendel, his client.

Krug, himself visibly emotional about the verdict, said the criminal case has taken a toll on him and his family.

“We respect the jury’s verdict," U.S. Attorney James P. Kennedy Jr. said. "As the guilty plea entered prior to trial by the Buffalo Police Department lieutenant on scene that night clearly establishes, the civil rights of the four young men arrested on May 31, 2009, were violated.

"Today’s verdict means that the jury concluded that Officers Raymond Krug and Joseph Wendel were not involved in those violations," he said. "In the end, this prosecution brought some measure of justice to all parties involved in the incident. That is how our system of justice is supposed to work.”

Earlier in the day, the jury asked to have read back the entire testimony of Silmon, who was shot in the leg while in the back seat of a police car, and Cheektowaga Police Sgt. Scott Grant, who was at the scene of the incident and testified earlier this month he heard the BB gun fire but could not identify who fired it.

On Thursday, at the prosecutor's request, Skretny ruled that the jury could consider finding the officers guilty of misdemeanor charges instead of the felonies.

The trial, the result of an FBI investigation, featured a number of key witnesses, including Silmon and the three others arrested that night nine years ago.

Silmon pointed the finger at Krug and Wendel and told the jury they laughed about the BB gun shooting.

"He positioned it into his hand and fired it once," Silmon said of Krug. 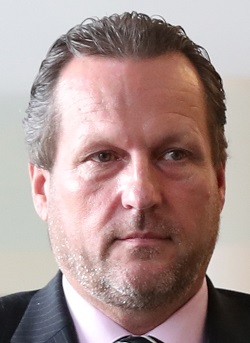 On the night Silmon was shot, there was a third officer, Lt. Gregory Kwiatkowski, on the scene.

Kwiatkowski, now retired, slammed each of the teens headfirst into a police car and later admitted his guilt as part of a misdemeanor plea deal with prosecutors.

He also testified against Krug and Wendel and admitted he was "upset, probably enraged" that night because the teens were suspects in a series of BB gun shootings, including some that targeted the cars and homes of police officers.

"I took it personally and lost control of myself," Kwiatkowski told the jury at one point.

During the trial before Skretny, the defense portrayed Kwiatkowski as the real villain and went so far as to suggest there were 16 unaccounted-for minutes in which he could have shot Silmon.

Krug, the officer prosecutors believed to be the real shooter, took the witness stand and repeatedly denied being the one who shot Silmon.

"Did Joseph Wendel ever encourage you to shoot Donald Silmon with a BB gun?" defense attorney Terrence M. Connors asked him at one point.

"Are you sure of that?" Connors asked.

"Did you do your job that night?" Connors asked his client.

The trial also featured the testimony of several police officers, including some who testified under subpoena.

The teenagers' arrest on Treehaven Road in 2009 followed their involvement in a drive-by BB gun shooting at Main and Custer streets earlier that night.

All four were charged with felony assault, reckless endangerment and criminal possession of a weapon. They ended up pleading guilty to a lesser charge of harassment and were sentenced to a conditional discharge and community service.

During the trial, the defense, including lawyer Nicholas A. Romano, introduced evidence of 18 other BB gun shootings that night, and an eyewitness took the stand to testify that it was Silmon's car he saw leaving the scene of one of those shootings.

Connors and Personius accused the four teens of lying under oath about the extent of their criminal activity that night.

Later, Silmon and Jeffrey E. Campbell II, one of the other teens, filed a lawsuit against the city.

After the verdict, Personius was asked to give his understanding of the circumstances of what happened on Treehaven Road more than nine years ago.

"I don't think we know the answer to that," Personius said. "I think what we do know is that Detective Krug and Officer Wendel were not part of the travesty, if there was one that took place that night. I think that's what this verdict shows us."

For the two men who were on trial, both said they're ready to get back out on the streets.

"I want to get back to work and help this community and do my job," Krug said. "That's what I want to do."