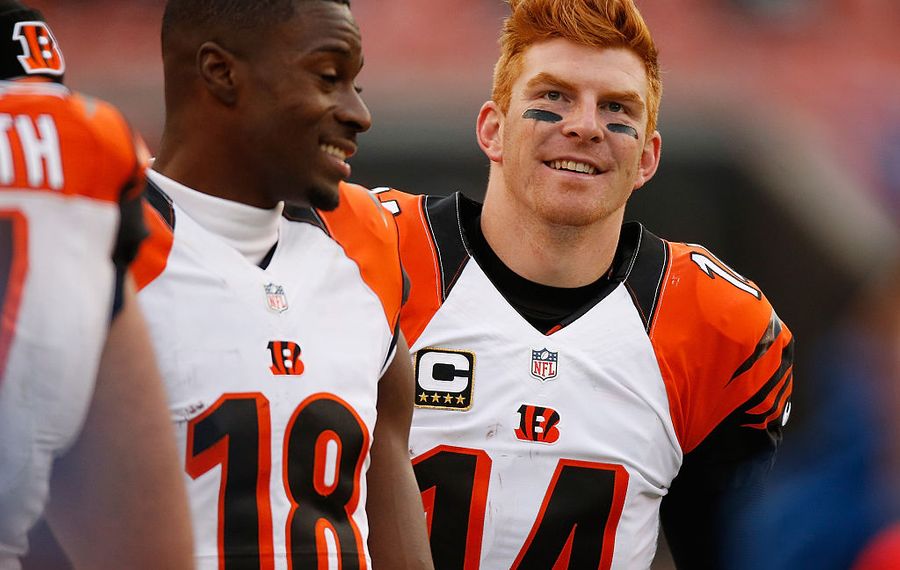 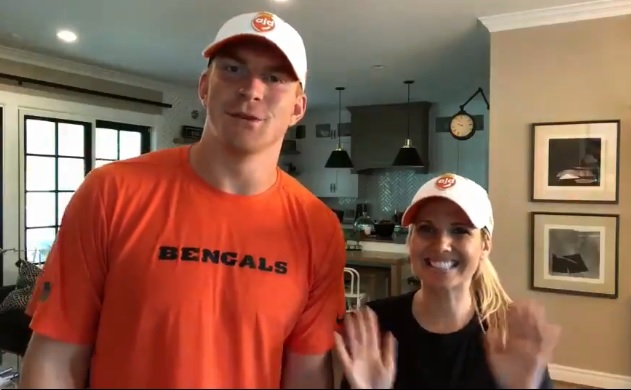 In a screenshot from their Twitter video posted via @andydalton14, Bengals quarterback Andy Dalton and his wife Jordan announce their foundation's donation to Roswell Park.

1. The crowd’s reaction to Andy Dalton. Dalton makes his much-awaited appearance at New Era Field since his 49-yard touchdown pass to Tyler Boyd beat the Ravens on the final day of the 2017 season became the final piece to fall into place to end the Bills’ 17-year playoff drought. Ever since, Bills fans have have shown their appreciation by donating more than $400,000 to Dalton’s foundation to benefit sick children and kids with special needs. The foundation is reciprocating by making donations to Roswell Park Comprehensive Cancer Center Sunday morning. There’s a reasonable chance the ovation for Dalton will rival, and quite possibly exceed, the greeting the crowd gives the home team.

2. Josh Allen’s first preseason start. His steady climb up the depth chart appears to have reached its natural conclusion. By starting the traditional dress rehearsal for the first game of the regular season, Allen seemingly is on the verge of winning the competition against Nathan Peterman and AJ McCarron. He might not necessarily have to deliver another eye-opening play like his touchdown throw between defenders to Ray-Ray McCloud against Carolina or his TD dart to Rod Streater at Cleveland. But he needs to avoid making any sort of backslide, which could be difficult given the shoddy pass protection of the Bills’ offensive line. Allen did do a nice job of avoiding pressure against the Browns.

3. The run defense. Which were the real Bills run-stoppers? The ones that held the Panthers to a mere 53 yards on 26 carries or the ones that gave up 63 yards on the Browns’ first offensive series on the way to yielding 164 yards on the ground for the game? It might have only been a preseason game, but it was ugly. Carlos Hyde and his offensive line made it look too easy while tearing through a Buffalo front that had presumably taken big strides by signing free-agent tackle Star Lotulelei to a massive contract and trading up to make freakishly athletic linebacker Tremaine Edmunds a first-round draft pick. Edmunds largely looked lost in the early part of the Cleveland game, and the coaches, while in love with his immense skills, see him as having a good deal of work ahead to find his comfort zone.

4. The homecomings of Preston Brown and Cordy Glenn. The Cincinnati-born Brown, who had been with the Bills since they made him a third-round draft pick in 2014, wanted a major pay hike that the team wasn’t willing to give him and he wound up getting a modest deal to join his hometown team. He said he’s hoping to get chances to blitz and make splash plays that will show the Bills what they’re missing. His former teammates are also expecting Brown, who is big on trash-talk, to do plenty of chirping. Glenn -- who the Bills traded to the Bengals, along with first- and fifth-round picks, to move up to the 12th overall choice -- is the opposite. He’ll quietly go about his business, unconcerned if anyone beyond Marvin Lewis and the rest of the Bengals’ decision-makers notices. The Bengals needed a big upgrade at left tackle and believe Glenn, provided he stays healthier than he was in Buffalo, can provide it.

5. The punting competition. All of a sudden, this got really interesting. Before the Seattle Seahawks released Jon Ryan last Monday, Colton Schmidt pretty much figured to be a lock to keep the job he has held for the past four seasons. Having parted ways with Cory Carter after he suffered a torn ACL against the Browns, the Bills pounced on the chance to acquire Ryan, who is expected to give Schmidt a much harder push to remain on the roster. As Bills kicker Stephen Hauschka, Ryan’s former Seattle teammate, said earlier in the week, Schmidt and Ryan are “fighting for their careers.” Given that there are only two preseason games left, every punt (including those in practice) will carry plenty of weight.