A true swashbuckling weekend of events lies ahead for the Buffalo area, with a wealth of festivals - ranging from ethnic to music to art - planned.

Considering the pace of activity slows considerably on Labor Day Weekend and beyond, now is the time to grab summer's tail and hold on tight.

While Sunday's second annual festival may not take advantage of the wild reverb, there's still three stages for an intriguing group of diverse performers.

[Related: Smiles at the 2017 Beau Fleuve Music and Arts Festival]

2) Spikes for Tykes, noon to 5 p.m. Aug. 26 at Woodlawn Beach (3580 Lake Shore Road, Hamburg). Cost is $40 general admission and includes an open bar as well as food from Blasdell Pizza.

Commentary: The annual coed volleyball tournament to support Kelly for Kids hits the Hamburg sand Sunday, and Hall of Fame quarterback Jim Kelly is expected to be in attendance at some point during the fundraiser.

Look back at Smiles from last year's Spikes for Tykes, organized by Ryan Stang, for an idea of what to expect at the event. 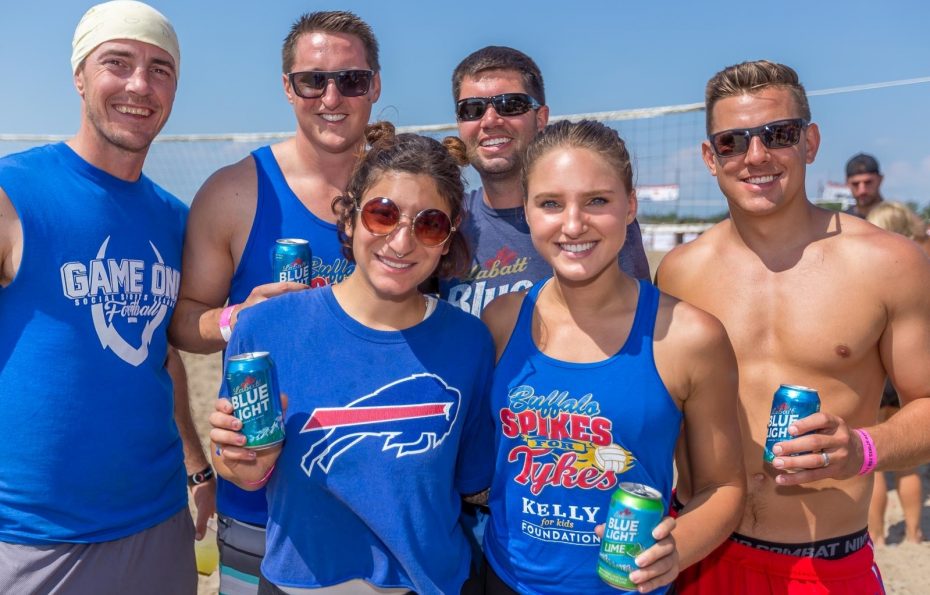 Smiling faces at the 2017 Spikes for Tykes at Woodlawn. (Don Nieman/Special to The News)

Commentary: Experience a full day of Indian culture presented by the India Association of Buffalo, with Bollywood dance, yoga sessions, henna, live music, art and jewelry vendors, kids activities and more are on tap for the waterfront festival.

This year's theme is India Rising, and there's an elaborate festival trailer!

Commentary: Traipse around Elmwood this weekend to peek at more than 170 vendors, enjoy live music on four different stages and embrace the Kids Fest, which is run by local artists and educators.

As in years past, the Food Truck Alley and Cultural Row will be two of the hotter areas. Look back at Smiles from 2016 here and 2017, to the right.

Commentary: A celebratory jig may be in order as the Buffalo Irish Festival weekend has arrived, featuring another bounty of live music - with Seamus Kennedy, the Dady Brothers and Glengarry Bhoys all in tow - and a slew of Celtic vendors prepared to set up shop.

Three Irish dance troupes - Rince na Tiarna, Clann na Cara and InnisFree Ceili - are all on the performance schedule, too.

Commentary: Few would argue that Leonard Oakes Estate Winery's SteamPunk Festival is one of the more oddly themed gatherings of the summer.

Now a part of Cider Week WNY, the festivities weave together freak-show experts Savage Buffalo Carnival, a performance at dusk by fire-wielding Pyromancy and the presence of several SteamPunk organizations from Western New York and Canada.

One mini event to try: Parasol Dueling. It looks both fierce and elegant. The SteamPunk Festival - which is easy to forget that it's based around a hard cider - produces one of the top Smiles galleries of the year, too.

How about these apples? Inaugural Cider Week WNY kicks off

See the full music lineup for Saturday on Facebook here.

Commentary: Bebop-swing vocalist Veronica Swift is the major name on the docket for Friday, supported as usual by the Benny Green Trio, while classical jazz pianist Elio Villafranca grips the starring role on Saturday.

Medium's interview with Swift late last year tells the story of her bebop roots, while Villafranca, a Cuban star in his own right, has put together a fantastic ensemble of jazz musicians, as the Niagara Gazette details in its preview here.

The annual festival is more than just the headlining acts, however, as the well-curated lineup touches on different branches and eras of jazz.

Commentary: Beyond Ghosts' seventh annual convention again converges upon the Central Terminal, a suitable locale for the horror-themed festival.

Celebrity guests such as Tom Atkins from "Halloween III," Steve Railsback from "Helter Skelter" and David Howard Thornton - the new actor for deranged Art the Clown - will be in attendance, with vendors, speakers, ghost tours, tarot readings and the festival's first haunted house also on the agenda.

5 events to anticipate for next week