In Buffalo, snow isn’t the only white stuff covering the landscape to the horizon.

If you go down to Seneca Street, there is also spaghetti parm.

The iconic dish, created at Chef’s, 291 Seneca St., might be city’s most famous pasta. It certainly is a touchstone for generations of Buffalonians who deem it a necessary part of family milestones.

That’s how spaghetti parm has helped Chef’s build one of the city’s largest thriving restaurants, with seats for 325. It drove the addition of a drive-through window in 2011, which sees as much business by itself as some small restaurants do altogether.

“It’s our No. 1  seller,” said Louis Billittier Jr., who runs Chef’s with his sister Mary Beth. There are other places in Buffalo that offer a similar dish, like DiTondo’s, another historic Italian-American restaurant a few blocks down Seneca Street. 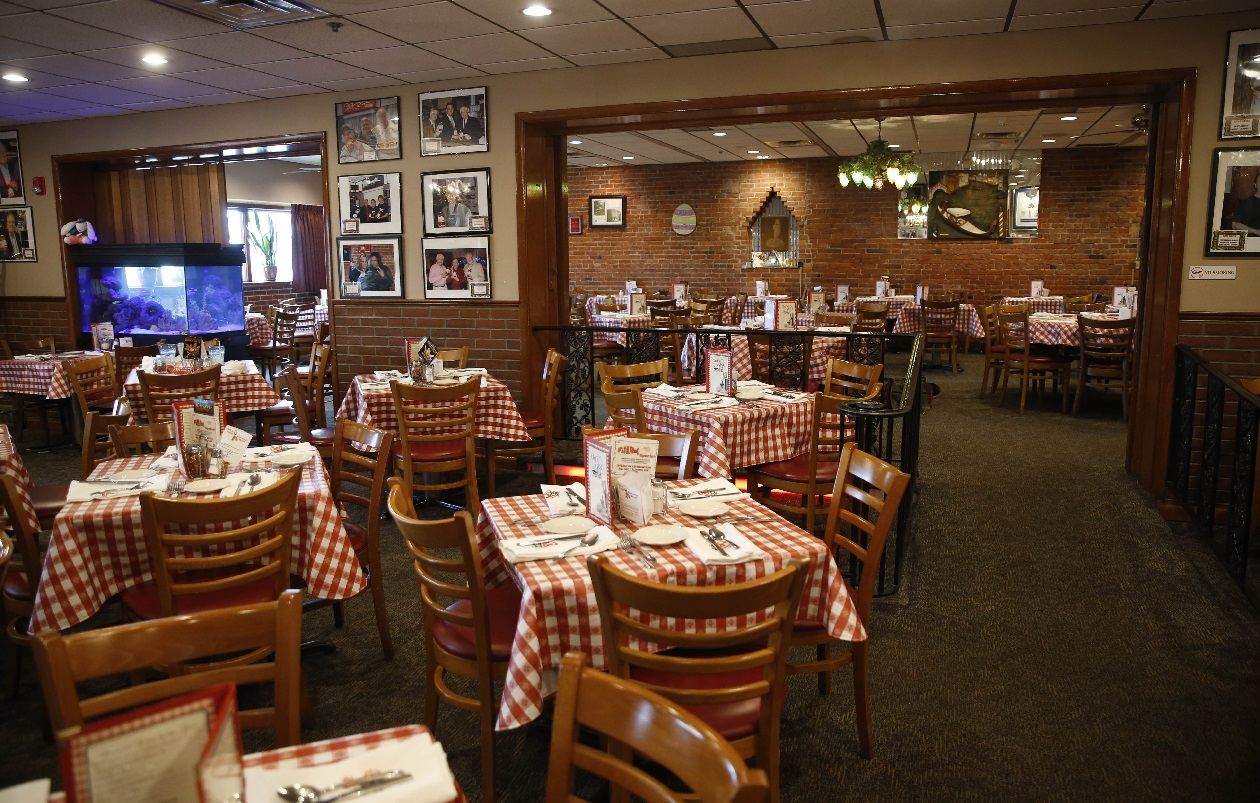 In a normal week, Chef’s sells more than half a ton of mozzarella cheese – about 200 pounds a day, he said – mostly on spaghetti parm. Some 300 orders a day leave the kitchen – and he’s not counting the Chef’s food truck, Billittier said.

The dish’s origin story starts with Louis Billittier, father of the current owners. He started at the restaurant as a dishwasher and eventually became sole owner in 1954.

In 1962, he met Dave Thomas, host of Rocketship 7, the children’s television show on Channel 7. After Thomas became a regular, he was kicking around pasta dish ideas with Billittier when they decided that the broiled mozzarella treatment given chicken parmesan should be extended to the entire plate. 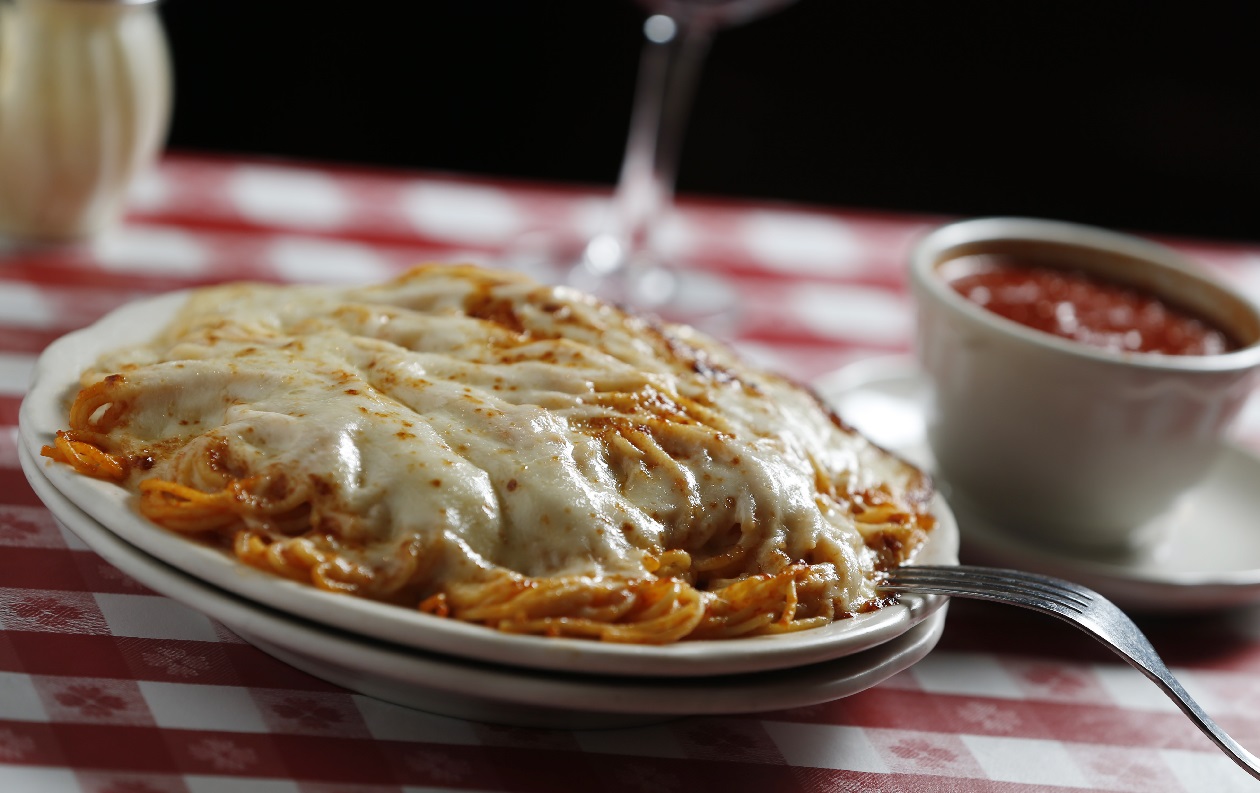 The dish’s genesis is recounted in detail in a video on the Chef’s website, ilovechefs.com, recording Thomas’ recent visit to Chef’s with his son David Boreanaz, television star of “Bones” and “Buffy the Vampire Slayer.”

Thomas started with the idea of mozzarella cheese on linguine with clam sauce, supplanting the usual grated parmesan. Together they worked out the format: spaghetti with a gloss of Chef’s standard tomato sauce, butter, and wall-to-wall mozzarella.

The plate would have to come on another plate because it had to turn up bubbling hot, with a cup of sauce on the side for dunking. Which contributed mightily to the development of the napkin-apron hybrids provided to Chef’s diners.

Among legions of Buffalo Bills and Sabres players to become Chef’s regulars, Hall of Fame defensive end Bruce Smith has been eating spaghetti parm regularly for 30 years, Smith said in another video. He’s been coming back to Chef’s for more since he was introduced to the dish in 1988 by defensive back Derrick Burroughs.

“I didn’t miss a Friday for I don’t know how many Fridays of my career,” Smith said. “The moment that I first tasted the sauce, the spaghetti parm, and the bread, and just how welcoming they were to the establishment, I was hooked.”

Six days a week – Chef’s is closed on Sundays – the kitchen’s day starts with blocks of mozzarella being fed into automatic slicers. Par-cooked spaghetti is finished to order in hot water, then tossed in a bowl with a scoop of sauce and butter.

Though the cheese everyone sees is mozzarella, the dish’s name is actually not a case of mistaken identity, Billittier said. A sprinkling of parmesan-romano blend hits the pasta before it’s covered with sliced mozzarella.

Then it’s time for the salamander, one of the restaurant’s massive heavy-duty broilers, capable of 800-degree temperatures, he said.

Parm fanatics tailor their experience with the help of the restaurant’s veteran servers, who have just about heard it all when it comes to parm people, Billittier said.

“Some people eat it burnt,” he said. “They want it actually burnt, almost black. Other people, they just want it lightly melted,” he said. “You get all sorts of variations.”

The standard remains golden brown, taking about 2 1/2 minutes under the heat.

Customers are encouraged to customize their plates, with a meatball, veal cutlet or other extras under the mozzarella quilt.

“When people get crazy, they start parming everything,” Billittier said. “We have people that will parm chicken cacciatore, half a chicken with the bones in it and everything.”

The restaurant expanded its parm reach with its Chef's on the Go food truck in 2015. (It’s currently off the road for repairs after it caught fire at Taste of Orchard Park.)

The next frontier? Air parm.

It started with a movie producer who’s a regular customer asking him to send spaghetti parm to New York City. “We made it and blast-chilled it down, and wrapped it, had a special Styrofoam box made,” he said.

“Shipped it to them overnight. They had it for 10 people for Easter. It was already broiled. They just heated it up. They said it came out great, just raved about it. So we’re looking to start shipping spaghetti parm.”