Here comes the neighborhood — or at least the first hints of one — at Canalside.

Plans for two five-story brick buildings, approved Monday by a state waterfront agency, call for restaurants, shops and offices. First-floor retail is expected to open by Memorial Day 2020, with the 41 residential units in the two buildings following a short time later.

The buildings will overlook the 3-year-old historically aligned canal used for ice skating in the winter, and they'll front Marine Drive, between Main Street and the coming Explore & More - The Ralph C. Wilson Jr. Children's Museum.

"The decisions made around this project will be a template moving forward with further neighborhood-based development," said Christopher Schoepflin, a senior vice president with Empire State Development.

"You will see buildings on this scale, a little bit smaller, a little bit bigger probably, happening on the north Aud block over the next five to 10 years," he said. "One by one, it will create a waterfront of  residential-based neighborhood that has a mix of uses."

"Our goal is a waterfront neighborhood that can survive on its own. The goal is not to create an outdoor mall for tourists," said Steven J. Ranalli, the harbor development agency's vice president of development.

"This is a substantial but replicable project," Schoepflin said. "It's mixed-use and mixed-income, preserves historic right-of-way interpretations, and has an aesthetic that is not a replication of anything that was there but is respectful of what the district was.

"You can visualize this happening six, eight, 10, 12 times with buildings properly scaled over the next decade on the north Aud block," Schoepflin said.

The approval of the Sinatra & Co. project comes on the heels of Gov. Andrew M. Cuomo's $10 million commitment last week to jump-start infrastructure in the hole in the ground north of the canal, where Memorial Auditorium once stood. That plan calls for restoring historic street patterns and building underground parking as an incentive for private development.

The governor took a similar approach to the project approved Monday by offering $2 million in infrastructure work for where the newly announced development will be.

The Sinatra & Co. proposal was chosen over proposals from Savarino Cos. and Douglas Development. 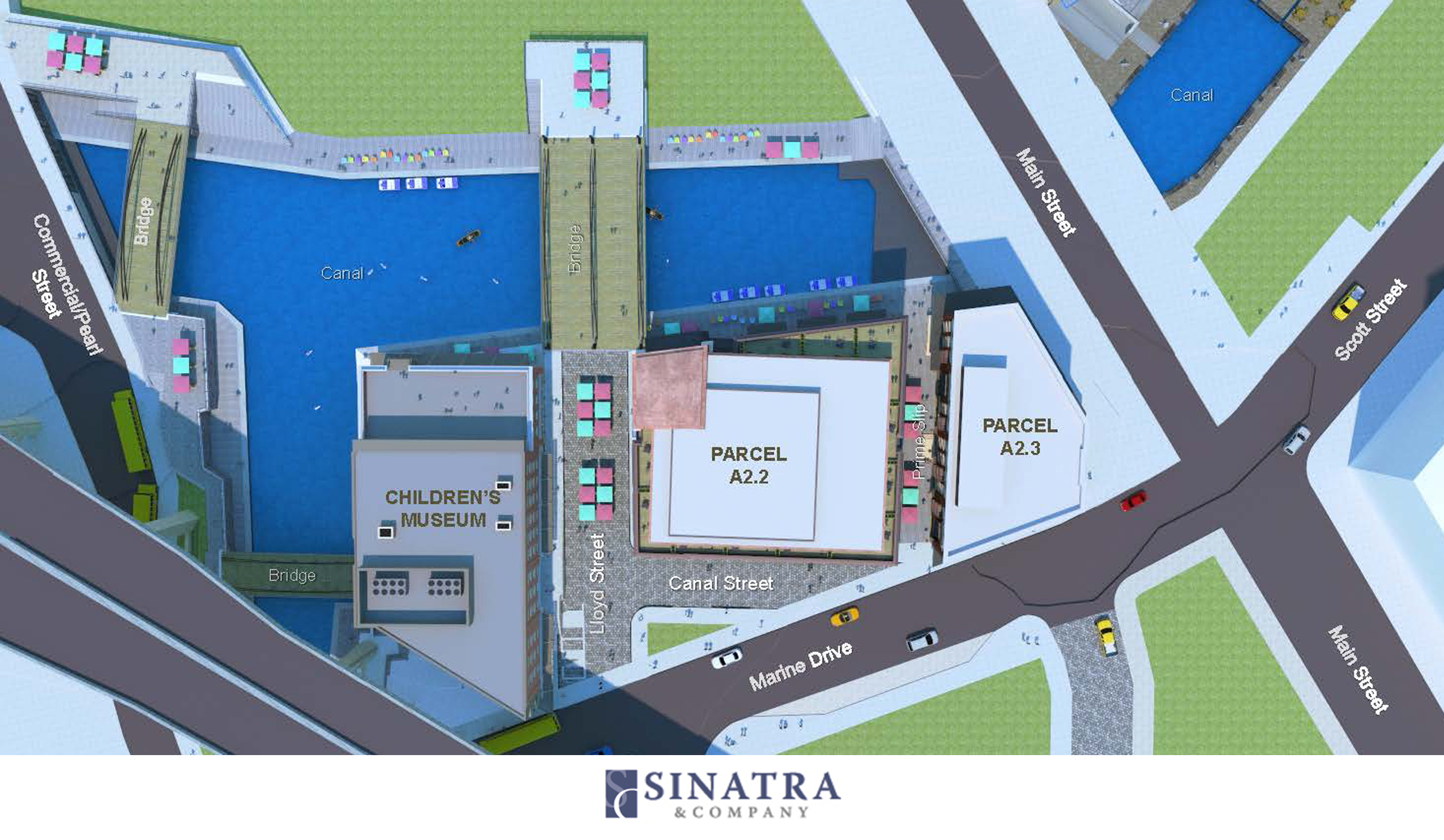 Two new buildings are planned near the children's museum on Marine Drive, with construction expected to start in March.

The land will need brownfield remediation that will take several months to complete, said Amy Nagy, director of development for Sinatra & Co.

Construction, she said, is expected to begin in March.

Together, the two buildings will occupy 71,000 square feet. By choosing to have a larger building and a smaller one that's triangular-shaped, the location of the historic Prime Slip was preserved, along with missing sections of Canal and Lloyd streets.

"It was important for us to continue to put back those historic infrastructural elements and still end up with two development parcels," said Ranalli, the harbor development agency's vice president of development.

The concept design was done by Fontanese Folts Aubrecht Ernst Architects of Orchard Park, which designed Explore & More. Renderings of the two buildings show each in a different color brick, with a variety of window sizes, some balconies, a rooftop terrace on the larger building, and awnings and overhangs above the ground floors of both, where retail will be found. Public paths continue to extend around the canal.

The density expected with the two buildings next to Explore & More will be a dramatic departure that's consistent with long-term plans for the site. 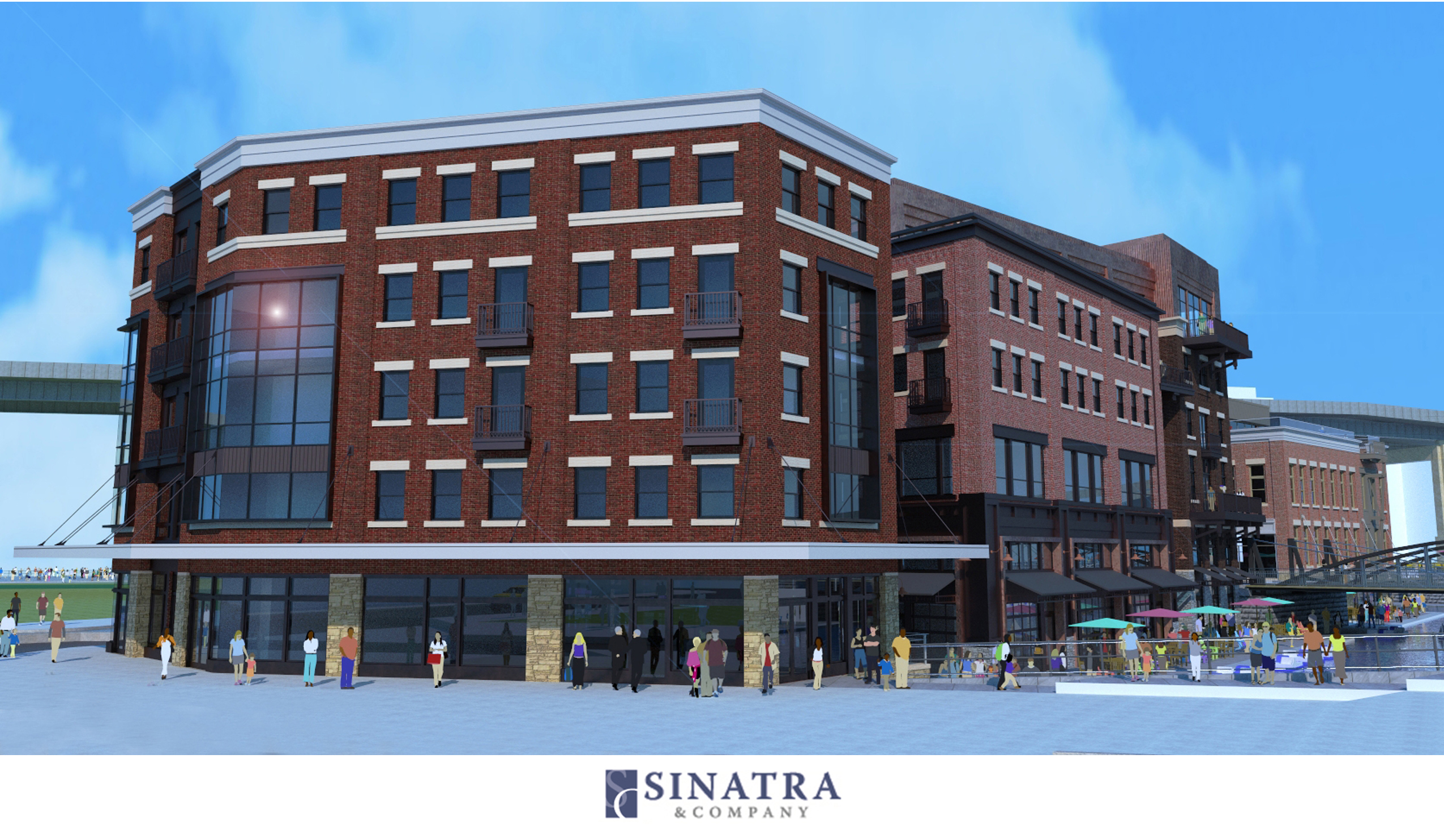 A rendering shows a view of the two buildings and Explore & More from Main Street.

Ranalli said the developer appears close to bringing in two restaurant tenants for the project but that it is too soon for any announcements. The waterfront agency made it known in its request for proposals that local operators were preferred over chains.

"We pushed for local tenants," Ranalli said. "We're pretty happy with who they're talking to. I think the family-friendly themes of the restaurants and who they are using is going to fit really well with Canalside."

Instead of building parking, Sinatra & Co. has contracted use of the HarborCenter parking ramp.

"That is a huge positive," Ranalli said. "It's transit-oriented development, and it was a big benefit to have a developer used to working in an urban environment. We didn't lose any space, or have awkward entrances on the site that come with parking garages and ramps."

Schoepflin said the development represents a transition from a primary focus on programming at Canalside to developing a neighborhood.