One by one, four men took the witness stand and told the same story of a May night nine years ago when they were all teenagers: After firing a BB gun into a crowd at Main and Custer streets, they returned, scared and nervous, to one of the teen's homes.

Defense lawyers say that's a "baldfaced lie" and on Monday accused the four of taking their shooting spree into North Buffalo, causing even more damage to cars and homes that night.

"We believe there were 18 more incidents," said defense attorney Terrence M. Connors. "They shot out more windows and did more damage to cars."

Connors claims the teens also fired at more people and said the defense is prepared to call an eyewitness who identified one of the teens and the license plate of their car after spotting them on Huntington Avenue.

The defense hinges its allegations on police reports documenting other BB gun shootings that night, and indicated the new evidence was uncovered by Raymond Krug, one of the two Buffalo police officers on trial.

Krug, a detective, is accused of shooting Donald J. Silmon, one of the teens, with a BB gun he seized after the teens' arrest in May of 2009. Officer Joseph Wendel is charged with egging Krug on and punching Silmon in the stomach. Both are charged with conspiring to use excessive force while acting under color of law.

Prosecutors said they were unaware of the additional shootings and acknowledged the revelation, if true, is "troubling." They also insist the allegation is unproven at this point. 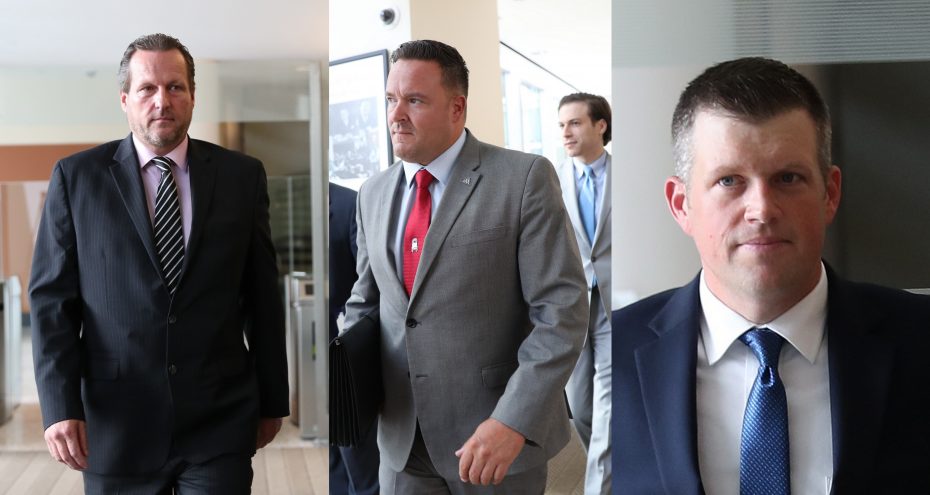 "This is an attempt to put the victims on trial," said Assistant U.S. Attorney Aaron J. Mango. "The victims were never charged in these incidents."

Over and over again, defense lawyers called on the U.S. Attorney's Office to end its prosecution of Krug and Wendel, a request U.S. District Judge William M. Skretny asked the government to consider.

After an hourlong break, Mango told Skretny that he had met with U.S. Attorney James P. Kennedy Jr. and indicated his answer was "unequivocal."

"Our intent is to continue with this prosecution," he said.

The charges against Krug and Wendel are rooted in a civil rights investigation by the FBI and a 2014 indictment by a federal grand jury.

The two officers are currently suspended with pay.

Personius said the additional shootings lend credence to the defense's theory that Silmon and the other teens fabricated the allegations against Krug and Wendel in order cover up their own criminal activity.

"Sometimes, the best defense is a good offense," he told Skretny.

Even more important, according to Connors, is the defense's contention that all four teens misled the court about what happened that night.

"The jury needs to know they lied under oath," he said.

When Mango indicated the government would not drop charges against Krug and Wendel, the defense asked Skretny to strike much of the testimony Silmon and the others gave while on the witness stand.

Skretny rejected their request but indicated the defense is free to ask that the four teens, now in their 20s, be brought back for further questioning in the wake of the perjury allegations.

Mango countered by reminding the judge that the government's case is based on more than the evidence provided by the four teens.

"This case doesn't hinge solely on the testimony of D.J. Silmon and the other victims," he said Monday.

Mango also noted that the additional shootings were known to the Buffalo Police and yet the teens were never charged with those crimes.

They were charged in connection with the drive-by shooting at Main and Custer and initially faced felony assault, reckless endangerment and criminal possession of a weapon charges. They pleaded guilty to a lesser charge of harassment and were sentenced to a conditional discharge and community service.

For his role in the BB gun incident, Kwiatkowski pleaded guilty to a misdemeanor charge of deprivation of rights under color of law.