The front door at 41 Sherman St. was wide open, but nobody was home.

Windows are boarded up or broken. Discarded liquor bottles and other trash are strewn across the yard. A junked sofa is propped up against the side of the single-family house. And parts of the exterior are in disrepair, exposing the clapboard underneath.

Over at 23 Southampton St. – a multi-family dwelling – the grass needs to be cut. Practically all the windows are boarded up and so is the front door. The stairs leading to the porch are detached from the railing, and the paint is peeling off the vacant building.  The property is for sale for $31,000 – down from $39,900 on Aug. 1 – and a "complete rehab" is needed, according to the Zillow website.

"It's bad because some people go back there and dump (garbage) and go back there to get high. God knows what else they are doing back there," said Noland Young, pointing to the backyard of 23 Southampton. Young has lived on the block since 1994.

Both houses are among the candidates for Operation Slumlord – a rogues' gallery of the 10 most dilapidated properties in the Ellicott District as selected by neighbors. Operation Slumlord utilizes the city's slumlord shaming campaign, in its third year, in which signs are installed in front of the properties targeted. Each sign will include the owner's name and mailing address so that neighbors know who is directly accountable.

The program – which is not limited to absentee or out-of-town owners – was launched in June, and the signs probably will go up in September, said Common Council President Darius G. Pridgen, who represents the Ellicott District.

Anti-slumlord legislation passed by New York State last month gives Buffalo the authority to add unpaid housing code liens to the property tax bills of non-resident rental property owners. Along with that, and the sign-shaming campaign that the city started three years ago, Operation Slumlord is another tool in the city's on-going fight against blight and to hold predatory slumlords accountable.

Even though the property at 23 Southampton St. has been on the market for about a month and a half, it has looked bad for about 10 years, said Young, who is optimistic about the Operation Slumlord campaign.

"It's a good idea," he said. "Hopefully, it will make them (owners) do something."

"I would hope and think that it would at least put some pressure on the property owner to get something done," said Cashaw, who has lived in the Fruit Belt for almost 30 years.

"Whatever we can do to make the Fruit Belt a livable and nice and clean-looking place for residents that are there now, I think that this is a definite positive," Cashaw said. 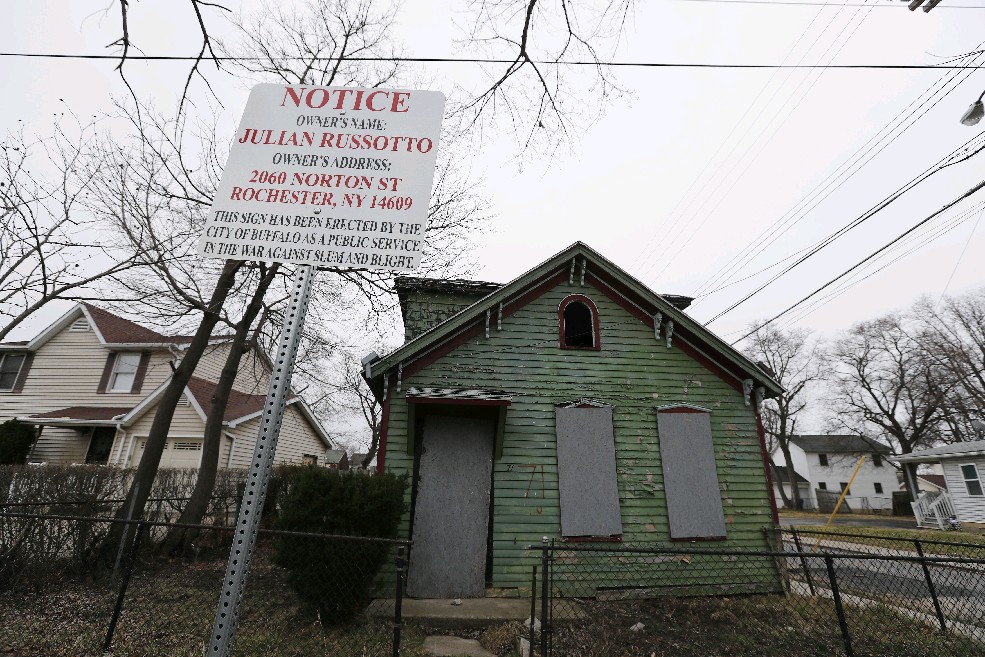 The city erects signs identifying the owners of some dilapidated houses, like this one on Orange Street in 2017. (Mark Mulville/News file photo)

For this year's Operation Slumlord, Pridgen asked residents to call or email his office to report properties in their neighborhoods that have been "continuously neglected with no owner attention." More than 30 referrals came in, he said. Pridgen and his staff are working to pare the list to the 10 worst.

"We will have a ribbon cutting at each one of those properties to help encourage those landlords who own property in the Ellicott District who have decided not to take care of them and leave them for the neighbors to cut your grass and to do other things like that. We will help the neighbors contact you," Pridgen said

This year is the first time that input from residents has helped determine the list of targets. This also is the first time 10 properties will be included. In prior years, only one property was targeted each year.

The process works like this: Once properties are identified by residents, Pridgen and his staff visit each one to examine them. His office works with the city’s Department of Permit and Inspection Services as well as the Housing Court to find out if the properties have violations and if the owners have cases pending in court. The owners then are contacted to inquire if they are actually doing the work to bring the properties up to code, Pridgen said.

"We want to give people an opportunity to rectify any problem or give us an explanation before we just put the sign out there," Pridgen said. “We want to know what their intentions are for the property. Those that either fail to respond or don’t have a viable plan… we will choose the worst 10 and install the signs.”

The dwellings at 41 Sherman and 23 Southampton have been vetted already, said a member of Pridgen's staff.

There are some restrictions on who is targeted.

“We will be very, very careful not to target the home of a person who may have just hit hard times but is really trying to improve their property,” Pridgen said.

At 18 inches high and 24 inches wide, the signs will be posted on the public right-of-way in front of the targeted buildings. Standard wording on each sign says, “This sign has been erected by the City of Buffalo as a public service in the war against slum and blight.”

The signs, which have black and red lettering on a white background, also include the owner’s name and address.

Once a sign goes up, the owners are responsible for the cost of purchasing, setting up and dismantling the signs. There is no limit to how long a sign stays up, Pridgen said. The sign remains "until there is some significant improvement" to the property,  as in the case of a house on Orange Street, which was the focus of last year's "Operation Slumlord."  The owner, Julian Russotto of Rochester, was in housing court earlier this summer and told the judge there was a buyer at an auction and that they were closing the deal, Pridgen said. The sign remains at the property.

In 2016, the first year Pridgen implemented "Operation Slumlord," a dilapidated 7,000-square-foot church on Sherman Street was the target. It had been purchased at auction by someone from New York City, Pridgen said, and "the only work he did on it was to put up boards on the doors that never stayed up.”

The city ended up demolishing most of the structure, with the exception of the bell tower. And the slumlord sign has been "taken down" unofficially under the cover of night, Pridgen said.

The city implemented the  "slumlord shaming" sign campaign in 2015, but Pridgen says he is the only Council member to implement the program.

Another program on the books is the new anti-slumlord state law that was passed at the end of July. It allows the city to convert judgments resulting from unpaid building and fire code fines into tax liens that become part of the annual tax bill on non-owner occupied properties. The new law targets out-of-town landlords who do not properly maintain their rental properties.