Memories of World War II are still crystal-clear for James W. Hooper Sr. even after seven decades have passed.

And the 95-year-old North Tonawanda resident has written a memoir to preserve his war stories.

Each page of the book includes pictures of Hooper handsomely smiling back at the camera with detailed accounts of his experiences and travel across the United States, Europe and Japan.

It all began when Hooper was drafted in 1943.

“I started with a basic one-week training in Fort Niagara,” he said. “And then we took a train and arrived at Camp Swift in Texas, where the 97th Infantry Division was.”

At Camp Swift, Hooper was put in an anti-tank company, where he trained with 37 mm guns hitched to a four-wheeled truck. 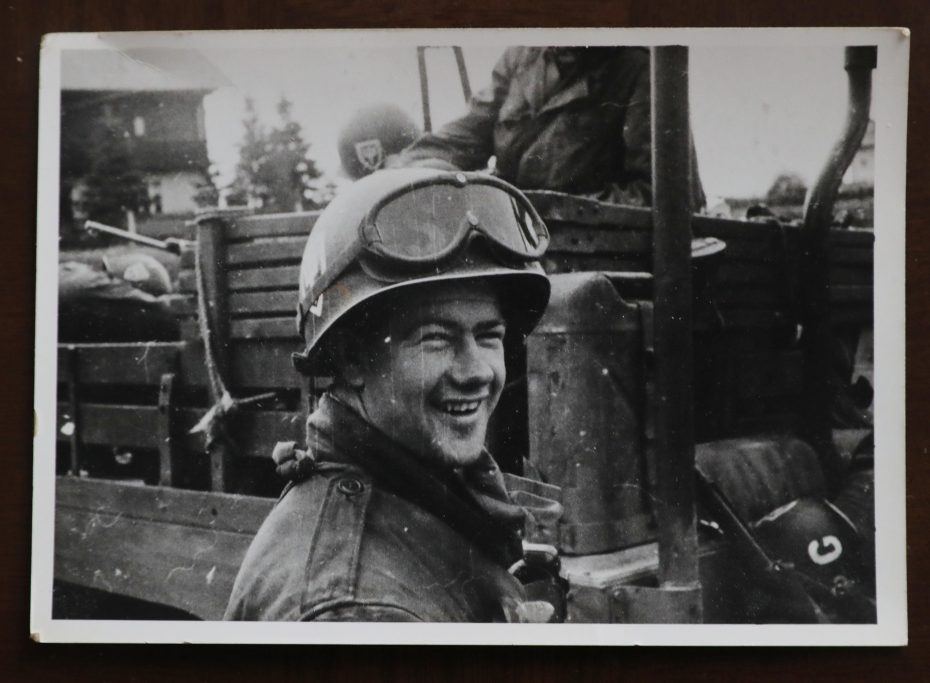 James Hooper, 95, in a photograph taken in Czechoslovakia when VE (Victory in Europe) Day was announced. VE Day was May 8, 1945. (Sharon Cantillon/Buffalo News)

He recalls one evening when a first sergeant announced an opening for the ‘acting corporal’ position, and asked the crowd if anyone wanted it. While all the other soldiers eagerly showed their interest, Hooper said he was indifferent about it, and sat in his seat eating ice-cream and writing a letter.

However, the sergeant pointed to Hooper and gave him the position.

After Camp Swift, he was positioned in Louisiana for winter maneuvers and Fprt Leonard Wood, Missouri, where he was sent on a mission to bring back an AWOL soldier from Army College in Washington D.C.

Hooper’s training continued in different locations across the country, including three months in California for amphibious training. He said he thought he was being trained for a mission in the Pacific Theater.

However, in 1944, he boarded a ship and ended up at Le Havre in France right after the Battle of the Bulge, and then he was headed to Germany.

“We came to a conclusion that we were all heading to Germany because Gen. (Dwight) Eisenhower didn’t want another Battle of the Bulge, so all the battle-ready men were sent over,” he said. “We had to take all our division patches off and the jeeps had to paint over their bumpers indicating 97th Infantry Division.”

Hooper and his Army unit went through France, Belgium, and crossed the Rhine River on a pontoon bridge to enter Germany.

“And of course the Germans weren’t too happy because they were shooting at us...I think they were trying to hurt us!” he said.

"When we finally arrived in Czechoslovakia, that was when the war ended.

“And we got the news that we were going home,” he said. “Boy, were we happy!”

However, that was not the end for Hooper’s service.

He was relocated to Kumagaya airfield strip for service during the Occupation.

That assignment enabled him to reunite with his brother, Robert, who he had not seen in three years.  Hooper was granted a three-day pass and went to Mito, Japan, to see Robert, who working as a baker for his base camp.

“My brother was kneading a loaf of bread in each hand, and when he saw me, he hollered, ‘Jim!’ and dropped the loaf of bread on the floor,” he said. “He then picked it up and said, ‘nobody will know the difference!’’’

They spent three days together and caught up on everything they had missed from being apart because of the war.

“I stayed in Japan for about four or five months,” he said.

One night, when he was on duty as the sergeant of the guard, he noticed the first sergeant’s hut light was on and found him writing down names in a list titled, ‘Men to be Discharged’.

Hooper said coming back home was his most rewarding experience.

“The greatest memory of the war was being discharged!” he laughed.