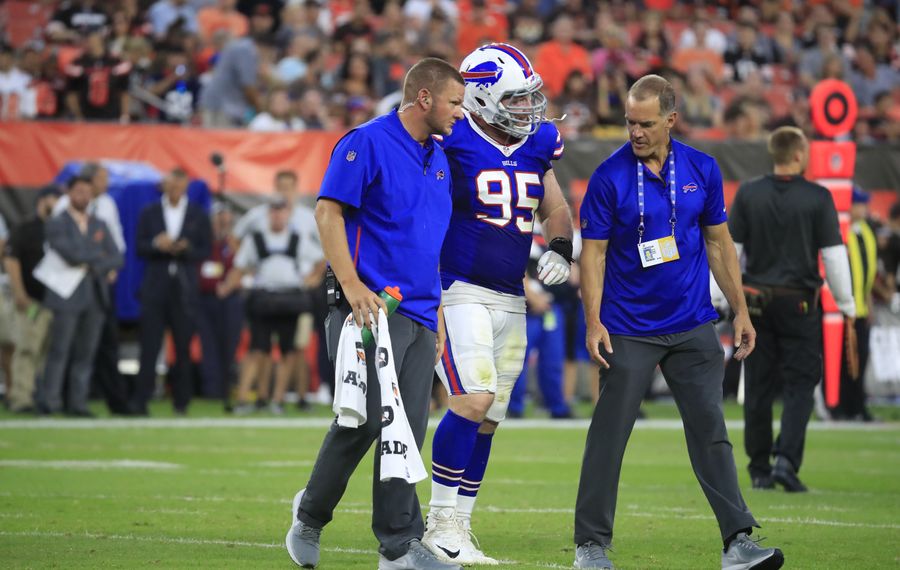 Heart and soul are the words that invariably come up at the mere mention of Kyle Williams.

"Honestly, you can't even put it in words, that's how important he is to this team," Adolphus Washington said of his fellow defensive tackle Sunday.

Earlier in the day, coach Sean McDermott told reporters Williams was "week-to-week" with the knee injury he suffered in Friday night's preseason game at Cleveland. McDermott said Williams wasn't going to undergo a medical procedure "at this time," but he offered no specifics on when Williams was expected back.

Williams was spotted in the weight room at the team's facility during Sunday's practice. "I think you could probably cut his leg off and he'd be here, training," rookie defensive tackle Harrison Phillips said to the media. "I think that's just the type of guy he is."

Still, the fact Williams wasn't on the practice field left an unmistakable air of discomfort among his teammates.

"As a defensive line and as a defense, even, we go at his pace," said defensive tackle Star Lotulelei, the Bills' biggest free-agent signing. "Whenever he's out at practice — even when he's not practicing — there's a standard that he sets and we, as younger guys, try to keep up with that."

The thought of Williams not being a part of the Bills is something almost no one with a rooting interest in them wants to fathom. Early in the offseason, the possibility that the 2017 season would be Williams' last created a bit of anxiety before he finally decided to accept a $1 million pay cut to remain with the team for a 13th season. 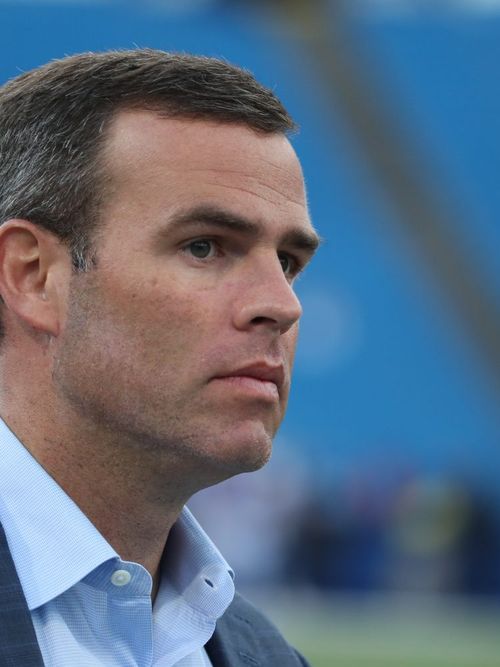 Projecting the next great edge rusher is an art form for Bills scouts at Senior Bowl Wed, Jan 22, 2020

NFL coaches and scouts are earning their money this week evaluating the crop of edge rushers at the Senior Bowl.

On Friday night, uncertainty concerning Williams' status returned with an even larger jolt after he wound up on his back, with the Bills' medical staff examining his right knee, early in the second quarter. During a 19-yard run by Carlos Hyde, receiver Rashard Higgins fell into the outside of Williams' right leg, causing it to bend awkwardly.

"I kind of stood there like, 'I can't believe that it's him that's laying down on the ground,' " Washington said. "Then I kind of snapped back to reality like, ‘Oh, (bleep)! I need to get in the game.'"

"It was just hard to see the leader of the team go down like that," Phillips said.

Before the next play, veteran linebacker Lorenzo Alexander delivered what he felt was a much-needed pep talk in the defensive huddle. He wanted to make sure no one would "mentally check out" as the Browns were building momentum.

"Because you see a guy like that go down, immediately your mind is like, ‘Oh, man! That's Kyle. He's down!'" Alexander said. "I'm just trying to make sure guys were still focused and locking into the game and that we can pick each other up. And knowing Kyle, he wants us to go out there and play well. He doesn't want us feeling sorry for him in the situation.

"Once he went down, I think those next three or four plays, guys kind of stood up and really played even at a higher level, played well, flying to the ball, and we were able to make them get out of field-goal range and actually made them punt the ball there. But it's hard to lose a guy like that. He's vocal, obviously he plays hard as hell, he sees a lot of things. He's like another coach on the field."

After sitting on the bench for additional examination, Williams made a long, slow walk to the dressing room, where he would remain for the rest of the night. The next time he was spotted, he was in street clothes, walking out of the dressing room with a long black cast around his right leg. Someone carried his his bag for him on the way to one of the buses that would carry the Bills to their chartered flight home.

"We're just going to take it one week at a time," McDermott said. "I know if Kyle can be out there, he'll be out there."

Williams commands tremendous respect throughout the team as someone who will not only battle through double-team blocks but also through the pain and injury with which virtually all players have to deal, but especially those who do the dirty work in the middle of the line.

That is something the other players on the team, especially the younger ones, are no more ready to do without than the many fans who wear Williams' No. 95 jersey.

With Williams sidelined indefinitely, the Bills will turn to Phillips and Washington to pick up the slack. They also added to their depth at the position Sunday by re-signing defensive tackle Tenny Palepoi, who fills the roster spot vacated after punter Cory Carter, who tore his ACL Friday night, was designated as waived/injured.

Phillips, the Bills' third-round draft pick from Stanford, has had a strong training camp and preseason. He figured to see a good deal of playing time even if Williams were healthy. Knowing that he was about to see even more prompted the coaches to take Phillips out of the Cleveland game sooner than they planned to reduce his exposure to injury.

"I'm anxious and eager any time I have the opportunity to go out and play the game that we all love and we've been working so hard for," Phillips said. "Anything I can do to contribute with my team — if that's with the ones, if that's with the threes, if that's in the first quarter, in the fourth quarter — I'm here to perfect my craft and help the team win. I don't wish injury on anyone, ever. I'm going to try to capitalize on anything I can, obviously, but my expectation is to do my one-eleventh and to help us finish this preseason with some wins."

The chance for Phillips and Washington to get additional snaps in next Sunday's preseason game against the Cincinnati Bengals at New Era Field is, in Alexander's view, the one positive outcome of Williams' injury.

The Cincinnati game is the Bills' third of the summer, making it the traditional tune-up for the regular season. Starters will see their most extensive preseason action before serving as spectators for the fourth exhibition game at Chicago.

"It's good in the sense that it gives Harrison and some of these other young D-tackles some more opportunities to be in live game moments, especially this next one where we're going to play even a little bit more where they can get more comfortable," Alexander said. "Because Kyle actually makes a lot of the calls on third downs, some checks, and those guys need to be able to do it. Obviously, they're not going to do it at his level, but need to have some comfort in making those calls and communicating with everybody down the line."

Alexander isn't worried about Williams missing the next two preseason games, which seems likely. The linebacker is hopeful the heart and soul of the Bills is on the field for the Sept. 9 regular-season opener at Baltimore, but that remains to be seen.

"Whether it's week two, week three, I don't know," Alexander said. "But knowing Kyle, he's going to fight to get back probably earlier than he should."

"I don't really know the severity of the injury, but just what I've known from what Kyle's been through and the things that he's come back from, this is probably a small thing to a giant," Washington said. "It's probably something that he's just going to spit on and keep it moving. That's how I think of Kyle. Kyle, to me, is like invincible."