WASHINGTON — The number of refugees resettled in Buffalo dropped to its lowest level in 11 years in the first half of 2018, as the Trump administration continued to shrink the federal program designed to help people driven from their homes move to America.

Some 245 refugees from across the world resettled in Buffalo and its suburbs in the first six months of the year, down from 460 in the first half of 2017 and 549 in the same period a year earlier, State Department data shows. Executives at the refugee resettlement agencies in Buffalo said they expect the decline to continue.

"It's really dire," said Marlene A. Schillinger, president of Jewish Family Service of Buffalo and Erie County, one of the region's four refugee resettlement agencies. "They're dismantling the whole system."

President Trump cut the target number for refugees admitted to America in the current fiscal year to 45,000, down from 110,000 at its peak under former President Obama.

That sharp drop in the number of new arrivals has been felt a number of ways in Buffalo, and it's been felt most acutely by the refugees who are already here — including many who now worry they're waiting in vain for family members to arrive.

"They are coming to me saying: 'What's going on? What's happening to my family?' " said Suad Obsiye, a case worker at the refugee resettlement program run by Catholic Charities of Buffalo. "And I can't do anything."

Obsiye, herself a refugee from Somalia, said she can think of at least 20 people who are waiting for loved ones. Karen M. Andolina Scott, executive director of Journey's End Refugee Services in Buffalo, said her agency has hundreds of pending family reunification cases, and other agencies also report large numbers of refugees in Buffalo who hope their family members can make it to the city someday.

Somalis, Iraqis and refugees from other Muslim countries appear to be having the most difficult time making it to America under the refugee policy changes. While refugees from those nations are no longer subject to the travel ban that Trump imposed on seven largely Muslim nations, the administration sharply toughened the vetting process for refugees from 11 "high-risk" nations.

That, combined with a sharp reduction in the number of U.S. officials vetting refugees, has made it particularly difficult for refugees from countries such as Somalia and Iraq to make their way to Buffalo, refugee resettlement officials said.

More than half the refugees to come to Buffalo in the first half of the year came from the Democratic Republic of the Congo, a war-torn African nation. And 66 came from Burma, joining Buffalo's largest refugee community, which is estimated to number more than 8,000.

The cut in refugee resettlement also is affecting the larger Buffalo community. A medical clinic and a dental clinic that catered to new arrivals closed their doors in recent months, and landlords that had planned on developing housing for refugees have canceled their plans, said William Sukaly, program director for the refugee resettlement program at Catholic Charities.

Meanwhile, employers who often hire refugees — such as local hotels and factories that hire unskilled labor — are having trouble doing so.

"Employers are calling us weekly, looking for employees," Sukaly said.

Those could be signs of an emerging trend.

For years, census data has shown that an influx of refugees and other immigrants had helped to stabilize the Buffalo population, which had been shrinking for half a century.

"We cannot grow an economy with a population that is shrinking and above working age," said Eva M. Hassett, executive director of the International Institute of Buffalo, which also resettles refugees in the city. 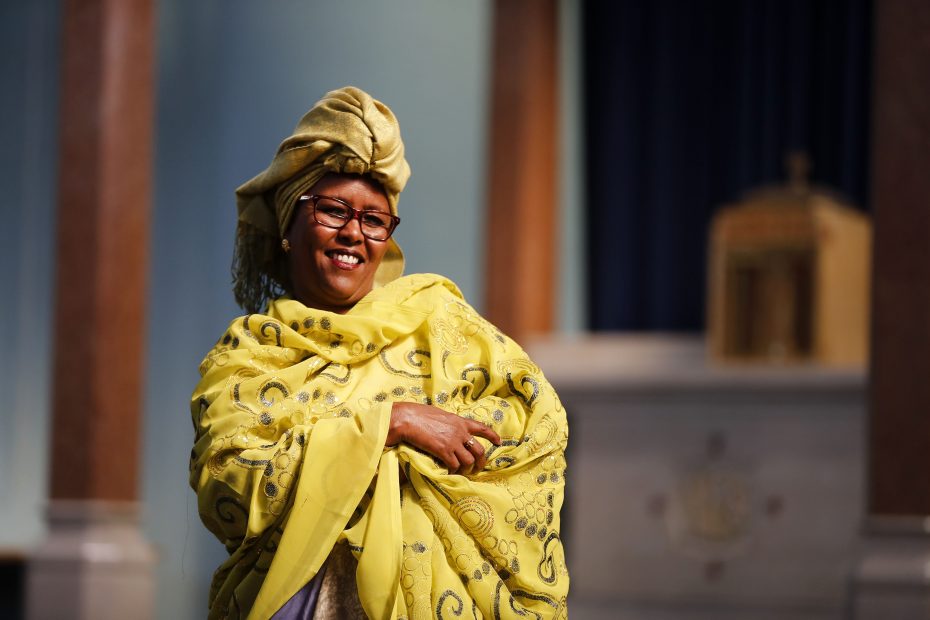 Refugees in Buffalo hoping to reunite with family members "are coming to me saying: 'What's going on? What's happening to my family?' " said Suad Obsiye, a case worker at the refugee resettlement program run by Catholic Charities. "And I can't do anything." (Mark Mulville/Buffalo News)

Hassett pointed to numerous studies that have, over the years, shown that refugees make good workers, that they often start small businesses and that they boost local economies. A decade after Buffalo's big refugee influx started, The Buffalo News found in 2016 that job growth and business starts in the West Side neighborhoods where many refugees live exceeded the countywide rates.

That was before the Trump administration's sharp break from the previous bipartisan efforts favoring refugee resettlement.

President Ronald Reagan, a Republican, welcomed hundreds of thousands of Vietnamese refugees to America. In his 1989 farewell address, Reagan told an anecdote about one of those refugees and said America is "still a magnet for all who must have freedom, for all the pilgrims from all the lost places who are hurtling through the darkness, toward home."

Trump, also a Republican, has taken a different direction. His administration has resettled 18,286 refugees nationwide so far in the fiscal year that started last October, meaning it will likely fall short of its 45,000 target. Trump is now contemplating cutting the target number for refugee resettlements again, to 25,000, in the fiscal year starting Oct. 1.

Trump has also spoken harshly about refugees and other immigrants throughout his presidency, including in a conversation with the Australian prime minister early last year about the possibility of the U.S. taking 2,000 Syrian refugees, most of them Christian, who had been in a camp in Australia.

"Does anybody know who these people are?" Trump said in that call. "Who are they? Where do they come from? Are they going to become the Boston bomber in five years? Or two years?"