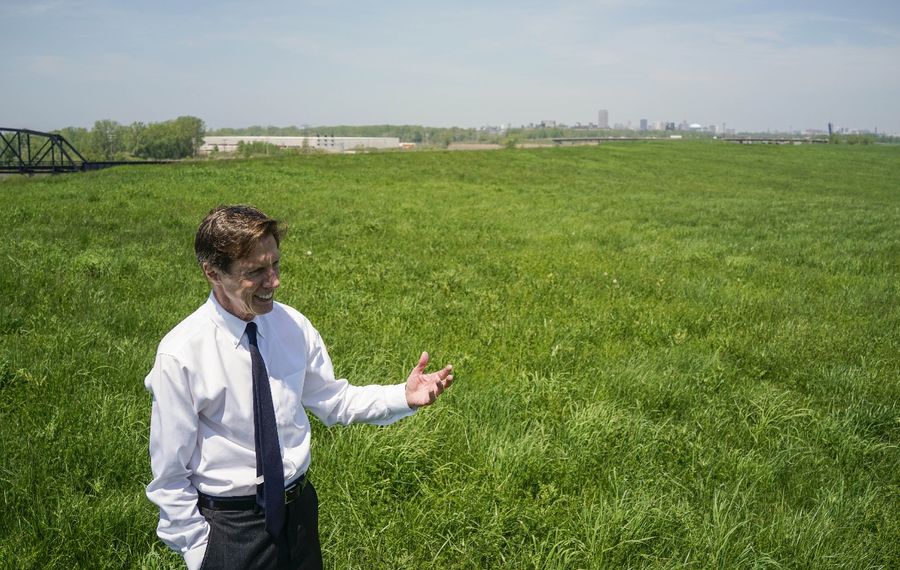 There were no shots fired, but a battle of dueling press releases broke out a few days ago over the proposal to put a Jack Nicklaus-designed golf course in South Buffalo.

Civic advocate Kevin Gaughan sent out word that he had passed a milestone this month by completing the purchase of 107 acres of land that he intends to be the site of the course.

Mayor Byron W. Brown put out a statement saying he is not on board with the proposal. Similarly, Stephanie Crockatt, executive director of the Buffalo Olmsted Parks Conservancy, which operates the city's Olmsted parks, expressed her own reservations.

Books on the art of negotiation don’t usually recommend doing it through press releases, though the opening move in "getting to yes" is often to say no. However, the mayor and the Conservancy need to keep an open mind about the project. The $42 million venture would be funded by private dollars, not public, and could be of great benefit to Buffalo.

The proposal, which Gaughan has spent four years advancing, is for a new public golf course designed by Nicklaus, to be built on a reclaimed brownfield that once was home to Republic Steel. Nicklaus Olmsted Buffalo Inc. paid $650,000 for the property, which is near South Park.

The plan calls for the nine-hole course now at South Park to be closed and replaced with the new one. The city and Conservancy could use the reclaimed land at South Park to revive Frederick Law Olmsted's design for an arboretum surrounding the Botanical Gardens. The Conservancy shares the goal of restoring the arboretum and is developing its own plan to do so.

Another part of Gaughan's plan is for Nicklaus to redesign the golf course at Delaware Park, using a smaller footprint than the current course. The proposal also includes an educational center to train young people for jobs related to the environment.

The position of Brown and the Conservancy's Crockatt is that Gaughan is jumping the gun by making public pronouncements about the project's progress. But Gaughan acknowledges there is a long way to go; it's not like he's got bulldozers circling South Park with their engines revving.

Crockatt acknowledges that restoring the arboretum at South Park, part of Olmsted's master plan, is a shared goal. "A brownfield reclamation for public use and recreation of this potential caliber, if properly executed, is good progress for all of Buffalo, and we wish the best for its success," Crockatt told The News. "However, in our aim to find common ground, there remains no golf market feasibility, no economic or community impact analysis, no financial sustainability pro forma, no plan details."

Michael J. DeGeorge, a spokesman for Brown, told The News the administration is "open to the idea, but there has never been any type of plan to deal with all the questions and that would be normal for a project of this size."

"We still haven’t seen any financials, or a golf market analysis," she said. "There's no community engagement to tell us how the community would feel about losing South Park golf course. ... We've been asking Kevin to provide answers. We get press releases, but we don't get facts."

Gaughan answers that public hearings, feasibility studies and other due diligence are all underway. And, he points out, Gaughan has not formally asked the mayor or the Common Council for their support for the project. He knows that would be premature.

Gaughan is the first to admit he is not publicity-shy, but he is no P.T. Barnum. Gaughan is a Harvard-educated practicing lawyer who is not naive about what it will take to get the Nicklaus golf course project from drawing board to full realization.

Many of the concerns raised by skeptics would be answered if and when contracts are drawn up. For example, the city and Conservancy are concerned, rightly, about replacing the revenue if South Park's course is closed and a new one is built that's not on Olmsted-controlled land. Gaughan says the city will draw substantial revenue from the new course, an important detail that contracts will clarify.

But there is an overarching point here: Jack Nicklaus is 78 years old. When history's greatest golfer, and a noted course builder, offers to work for free to get a project like this off the ground, why stand in his way?