Evette Phillips overcomes the rain, storm and blizzards if it means one thing — feeding the homeless.

She has fed more than 1,000 people since 2012 as part of We R Buffalo Strong, a self-funded program that provides food and clothes for the homeless.

The program held its monthly cookout under the tunnel at the Central Library on Sunday. It served hot dogs and burgers to 240 people and provided 30 free haircuts.

Phillips, of Buffalo, started the program by saving her own money, serving home-cooked food and receiving donations from her friends and members of the community.

"The homeless are the forgotten souls," Phillips said. "And compassion is just what drives me to help them."

For the first five years of the program, she independently ran the whole operation, driving out of the city to pick up donations and cooking large portions of food at her own home.

"I've traveled to Wheatfield, Niagara Falls and Grand Island," she said. "If people say they have clothes or food then I will travel to get them."

Phillips is a single mother of four who is retired and on Social Security disability.

"It's honestly a struggle and I'm barely getting by," she said. "But I need to be that change for our community, because if not me, then who?" 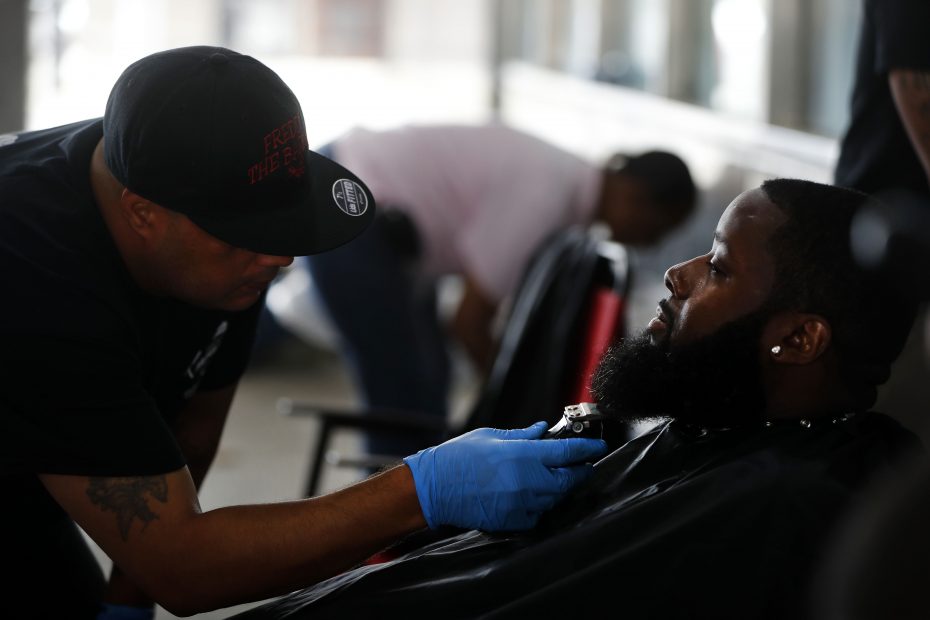 Freddy Garcia gives a haircut to Lester Moody as volunteers from We R Buffalo Strong help to feed and clothe the needy on Elliott St in Buffalo Sunday, August 19, 2018. (Mark Mulville/Buffalo News)

Her program started to gain more recognition last year, when she received the 2017 Humanitarian of the Year Award from Compass House, a shelter in Buffalo for at-risk youth.

More people reached out to Phillips after hearing about the work she has done, and she created a Facebook group for those interested in helping out.

In fact, she was able to connect with the barbers from Pagan's Barbershop, who volunteered on Sunday, through her Facebook group page.

Freddy, a Lockport barber who requested that his last name not be used, said he also came from a humble background and tries to give back to the community however he can.

"We were tagged on a Facebook post and decided to come down here," he said. "Our barbershop does similar volunteer work in our own community, and although it’s our first time in Buffalo, the cause is the same."

Phillips now has a team of around 20 volunteers, who return to the same location once or twice a month to distribute food and other donations.

Anna Masters, one of the returning volunteers from Lockport, said she heard about the program last year and has consistently lent a hand.

Homeless people, who were familiar with the program, began lining up half an hour before food was served.

Robert Maio, a Buffalo native and one of the homeless at the event, said he was grateful for the support the program provides for the community.

"There are no better days than these," he said. "It's days like this I look forward to and I come to these events often."

Jerry Davis, a homeless person who moved to Buffalo from Tennessee in May, said he was happy to have a place to go on a Sunday.

"Events like this gives me a place to go," he said.

Phillips said she has two long-term goals she wants to achieve — to expand the program into a nonprofit so that she can apply for grants and to purchase a food truck so she can feed the homeless in different locations.

"A food truck means I won’t be centralized to downtown Buffalo, and I can go across Western New York and feed the homeless when I see them," she said. "It's nice to have volunteers and donations coming from different places."