The most popular size for a Buffalo Games jigsaw puzzle is 1,000 pieces.

For avid puzzlers, the puzzles with fewer pieces probably aren't challenging enough. On the other hand, 2,000-piece puzzles require a lot of space to assemble and about 30 hours to complete. So 1,000-piece puzzles are a sweet spot.

Buffalo Games ought to know the nuances. The company sells about 7 million puzzles a year, as well as about 500,000 games. Both categories of products are driven by the creativity and instincts of Buffalo Games' employees, including a number of Fisher-Price alums.

The number of pieces in a puzzle is a key "filter" customers use when making a purchase, said Nagendra Raina, the president and a partner in Buffalo Games. "On the sales team, they call that the shoe size. You might like a different color shoe, but if it's not your size, you're not going to buy it."

The image the pieces create is, of course, very influential, too. It helps that Buffalo Games has exclusive deals to make and market puzzles with images by the late painter Charles Wysocki Jr., as well as "Star Wars" adult puzzles, Raina said.

"Those contracts are meaningful to us for our growth because the consumers are looking for those specific artists," Raina said. The company frequently releases new puzzles based on Wysocki's work, and he has a devoted following. Buffalo Games describes his work as a "stylized version of American yesteryear," including scenes of horse-drawn carriages and the Old West. 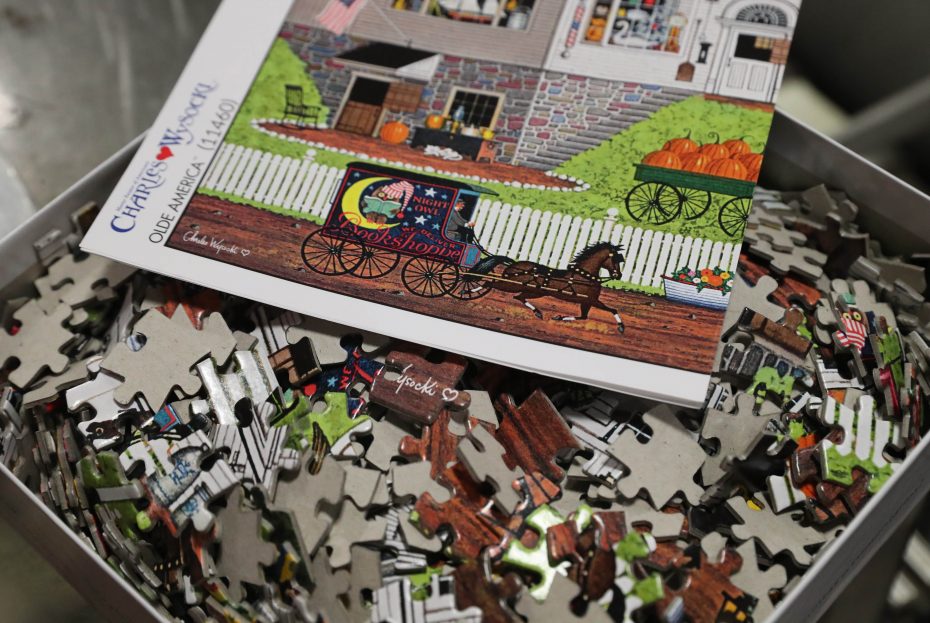 Other consistently strong-selling images for puzzles are Times Square and the Neuschwanstein Castle in Germany, which is considered an inspiration for Cinderella's castle. Buffalo Games embellishes nearly every image it uses for a puzzle, to make the picture more colorful or more detailed, Raina said.

The pictures are attached to pieces of sturdy graphic board, which are later fed through presses that act like giant cookie cutters. The process creates the jigsaw pattern for the assembled puzzle. Buffalo Games buys its graphic board from the Netherlands; Raina said the board's strong fibers create less dust when the pieces are cut. The jumbled pieces then drop into boxes, which are also created inside the plant.

Games are equally important to Buffalo Games' business, Raina said. That business segment is more seasonal than puzzles, with sales peaking around the holidays at the end of the year. 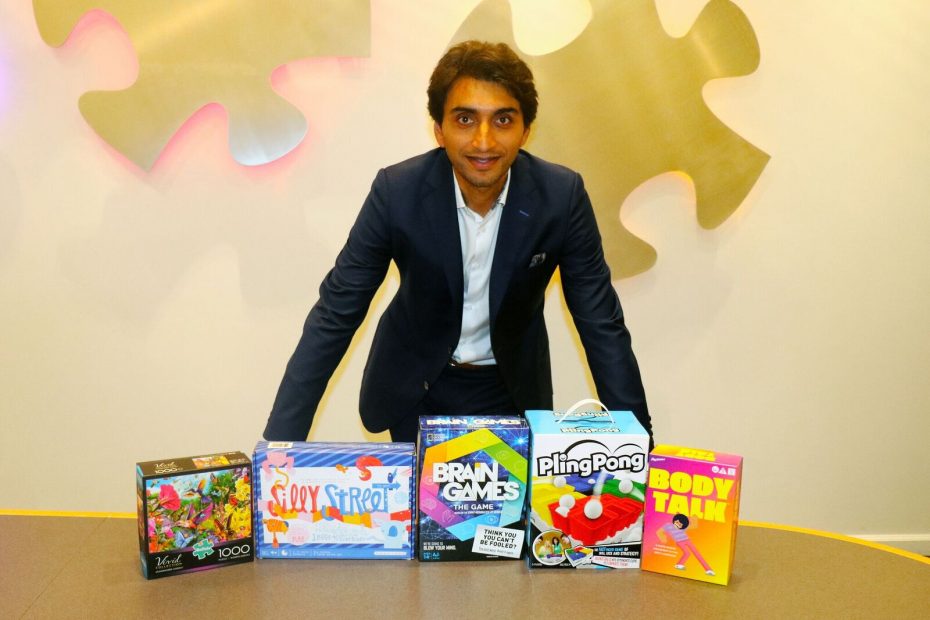 For instance, Buffalo Games sells a skee ball game, made of wood, that can be played at home. There are also games that tie into to TV shows, like "Brain Games," from a National Geographic Channel program. The company has released a new NFL-themed game.

A couple of years ago, a YouTube video featuring a mouthpiece used by dentists went viral. Buffalo Games caught that wave and created a party game called "Watch Ya' Mouth," which became a hit and remains a good seller.

Ideas for games come from a host of sources, including outside the company, Raina said. "Some of the games we have come from individuals that never, ever designed a game before." If an idea gets produced, Buffalo Games signs a contract with that person, typically paying royalties on sales.

Inside the company, creative minds like John Bell are also at work. The shelves of his office overflow with games, which he uses for inspiration. "I use it a lot for, 'What's not here? What's missing?' " said Bell, who is director of design and product development. 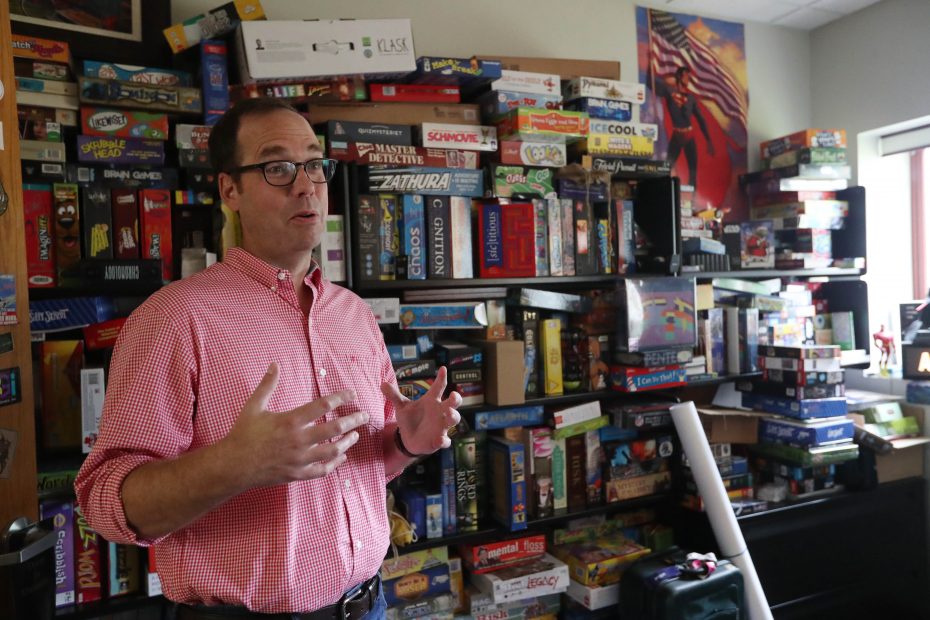 The office of John Bell, the lead designer, is filled with hundreds of games. He and other staff play the games to get an inspiration. (Sharon Cantillon/Buffalo News)

Buffalo Games has 75 employees, headquartered on James E. Casey Drive and generating about $100 million a year in annual revenues. The company was founded in 1986 by Paul and Eden Dedrick, who remain owners.

Buffalo Games sells its products online and on the shelves of retailers including Target and Walmart. Raina said Toys R Us generated only a small percentage of the company's sales, but he still lamented the loss of the chain.

"There's no retailer in America that can dedicate the amount of space that Toys R Us did to toys and games and puzzles, and that's just not as good for the industry as such," he said.

Raina said Buffalo Games is adept at taking an idea and quickly turning it into a game to sell. And the company prides itself in its product mix, like sending a variety of puzzles to a store in a single shipment. "When we ship out a four, five or six-pack to retailers, they almost never have the same puzzle," he said. "They have multiple different images within the assortment. And we just keep the assortment fresh."

"A lot of us came in from Fisher-Price," Jamesson said. "What we kind of brought is a world-class sales team. A lot of our sales reps have worked at Mattel, at Fisher-Price and have big-retailer experience, and we brought them over to manage those relationships. It's been phenomenal."

Bell said the ideal game produced by Buffalo Games is one that is easy to learn and easy to get into.

"You work hard to hear those three magic words: 'Let's play again,' " he said. "You want to be the game that's on the top of your game stack at home, not the one on the bottom, where you say, 'I forgot we had this.' "