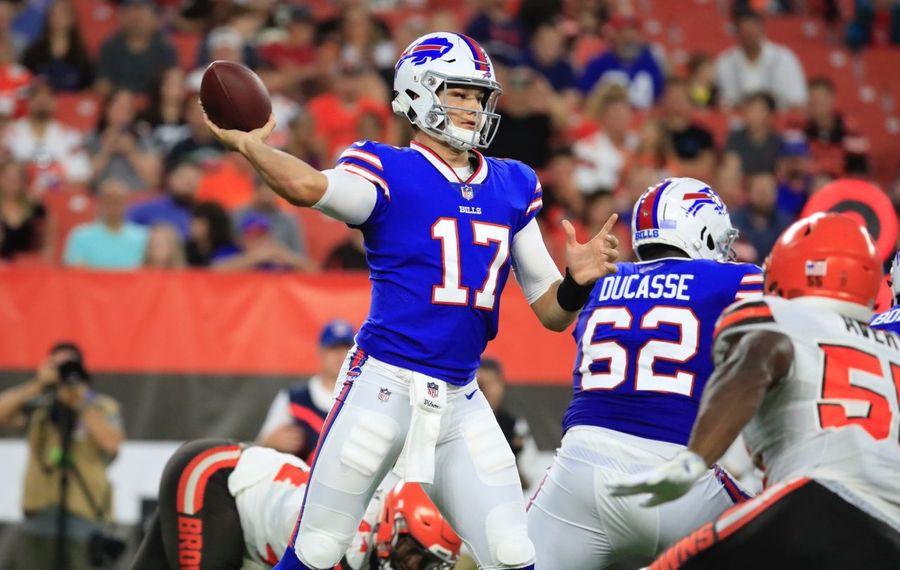 CLEVELAND — Let’s dispense with the suspense.

Josh Allen is your Day One starting quarterback for the Buffalo Bills.

At least, he should be.

It was separation time when the Bills faced the Cleveland Browns Friday night at FirstEnergy Stadium. And after entering the Bills’ 19-17 victory in the second quarter, Allen separated himself from AJ McCarron and Nathan Peterman.

That isn’t simply because McCarron, the most experienced quarterback on the roster, suffered what The Buffalo News is reporting as a hairline fracture of the collarbone. After the game, coach Sean McDermott confirmed to reporters that McCarron had a right shoulder injury. "We'll know more as we get back to Buffalo (Saturday)," McDermott said.

Allen separated himself with his performance. He did it in more ways than this, but the one play that could be called the turning point in the three-way competition came with 3:55 left in the first half. That was when Allen evaded pass-rushers and calmly stepped up to the middle of the pocket to fire a two-yard dart to Rod Streater in the back of the end zone.

That tied the game at 7-7. However, it should have untied the knot at quarterback.

Does Allen think he has done enough to put an end to the competition?

"That's not up to me," he told reporters. "That's completely up to the coaches, and, obviously, whatever happened tonight with AJ. It's some tough circumstances because everybody that knows him knows he's a great dude and I'm hurting for him tonight. I sent him a little text.

"You hate to see it happen, but as of now I'm looking to improve. I know there's a lot of things to improve on in my game and I'm going to continue to do that."

The concerns that Allen is too green to be put into a real game beginning with the Sept. 9 game at Baltimore are valid. He could take some major punishment from the Ravens’ and other defenses, especially in the early going. But that would happen pretty much at any point that the Bills put Allen on the field in his rookie season, which figured to be the plan all along.

There is no need to delay the inevitable. Allen is the Bills’ most talented quarterback and the most talented player at any position should be on the field from the start of the season.

Allen also led the Bills to a field goal just before halftime and another field goal in his only series at the start of the third quarter.

But the scoring throw was as clear an example as any of what Allen can do that the Bills’ other quarterbacks can’t. It showed the power he has to deliver a ball that moves fast enough to avoid being touched by a defender on the way to the intended target. Allen also demonstrated his considerable athleticism and solid instincts to feel the pressure and understand his situation.

"Rod's a long-time vet and he knows how to win," Allen said. "He was there on time at the right time. We had a little pressure at the beginning, but we made the play and I just had to get the ball to him and he did it. It wasn't a high throw; I was just trying to get it on him and let him make a catch for a touchdown."

McCarron started and not only did nothing to distinguish himself as a starting candidate, but appeared to lose ground even before suffering the injury, which was believed to have occurred when he was hit hard from behind by defensive end Myles Garrett.

McCarron threw a long pass on the first play from scrimmage over the head of Kelvin Benjamin on the way to the Bills going three-and-out.

On McCarron’s second series, he completed his longest pass of the night, covering eight yards, to Benjamin. Then, on third down, he continued with his habit of holding the ball too long and was sacked for a seven-yard loss.

His fourth series again saw him hold the ball too long on third down, which, in turn, helped result in a holding penalty on guard Vlad Ducasse. That set up a third-and-12 from the Bills’ 21. What did McCarron do? He threw five yards to Zay Jones.

Peterman, who started the preseason opener against Carolina, entered the game when Allen exited after one possession in the third quarter. He didn’t have a completion on his first two throws. He was sacked and was called for an illegal formation when he threw a pass beyond the line scrimmage.

Peterman did pick things up, however, connecting with tight end Nick O’Leary for a 35-yard touchdown on the way to finishing with eight completions in 10 attempts for 113 yards and a passer rating of 147.1. 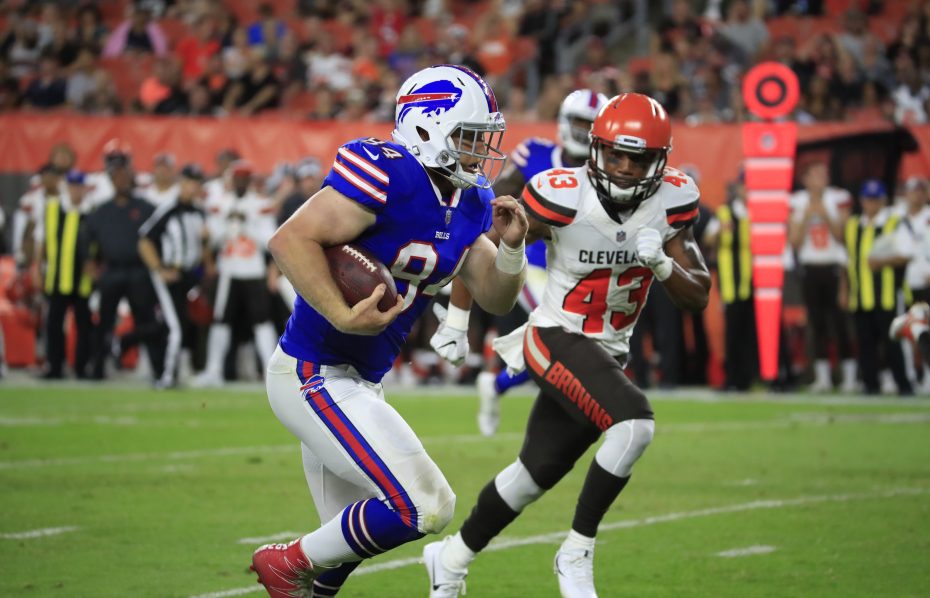 What Peterman does, however, is mostly nondescript. The same is true with McCarron, who was 3-of-6 for 12 yards and had a passer rating of 56.2.

The playing-it-safe routine is not what the Bills want or need. But it’s what McCarron does and what Peterman does to a lesser extent.

It isn’t what Allen does. The Bills had that in mind when they made him the seventh overall pick of the draft.

After playing in the second half last week against Carolina surrounded by a bunch of players who are projected backups or unlikely to even make the final 53-man roster, Allen had the starting offensive line and Benjamin and Andre Holmes as his wide receivers. His confidence, which hasn't been lacking since he arrived in Buffalo, seemed to make a significant leap.

"I thought tonight was good," Allen said. "Still, there's some things I need to do better. As an offense, we need to move the ball a little better and that starts with us, so I'm going to break down this film and understand and try to fix whatever problems we may have. And it's going to start with us.

"I've just got to continue to do a better job improving every week."

He misfired to Benjamin in his first attempt, then converted a third down with a seven-yard completion to Andre Holmes for the Bills’ first first down of the game.

After Allen was sacked for a loss of six yards, bringing up third-and-13 from the Buffalo 32, an illegal use of hands penalty on the Browns during a three-yard Allen run gave the Bills a first down. After that, Allen connected with tight end Khari Lee for a nine-yard gain on the way to his TD throw to Streater.

On the first play of his second series, Allen scrambled for a nine-yard run to set up a first down. He also had a six-yard run before spiking the ball with 14 seconds left in the half. He threw incomplete before Stephen Hauschka kicked a 33-yard field goal to give the Bills a 10-7 halftime lead.

Allen stayed in the game in the third quarter, and helped get the Bills in range for a 53-yard Hauschka field goal to make it 13-7.

"You know, as quarterbacks sometimes we try to make this game more complicated than what it is, taking what the defense gave us tonight," Allen said. "Getting the ball in the hands of our playmakers was what we were trying to do, and I felt like I did a pretty good job with that. Still some throws that I missed that I shouldn't have missed and some decisions that happened quick and just some things to clean up."

"It looked like it was a step in the right direction," McDermott said of Allen. "Certainly, he got some meaningful time in the first half, which was important. (He) directed a two-minute drive before half, came out after half and took control of the first series there, which is all good experience for him."