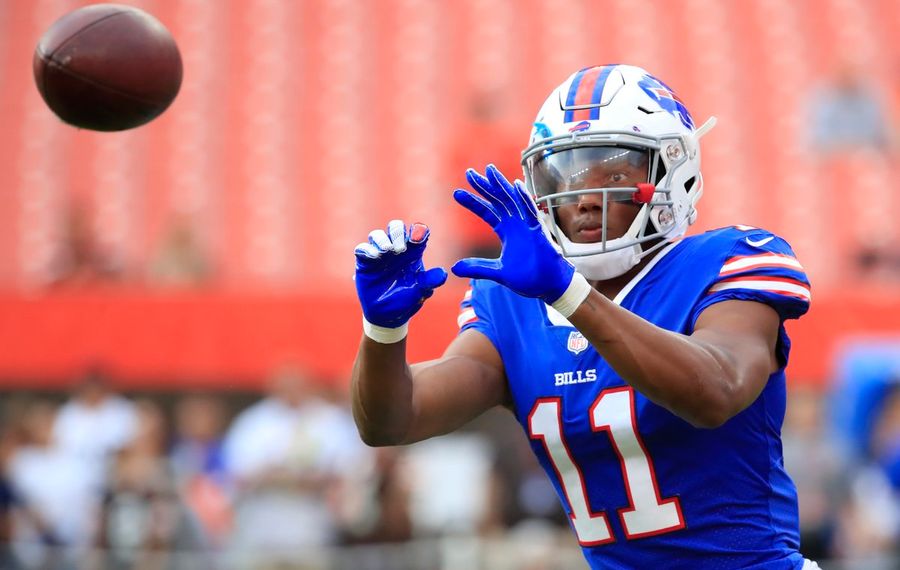 CLEVELAND – The top of the Buffalo Bills’ depth chart at wide receiver is starting to crystallize. After that, though, it’s still anyone’s guess as to who has the inside track for a spot on the 53-man roster.

That’s a big step in the right direction for Jones, the 2017 second-round draft pick who is coming off a tumultuous offseason. While it was not a big statistical performance – he finished with just one catch for 5 yards – it’s telling that the Bills had him with the starters despite his limited practice time. Jones has only been cleared for full contact in the last week as he recovered from knee surgery, but has done enough in that short time to earn a spot with the starters.

“I'm just listening to the coaching staff,” Jones said. “Whatever group they want me to roll with, that's what I'm doing. I'm working my way into it. When you play this game, no one is ever fully, 100-percent healthy. It's hard. So just taking it day by day and doing things I need to do in the training room, on and off the field to stay healthy.”

That has been Jones’ approach since he was activated to the 90-man roster from the non-football injury list.

“It’s a little bit that he has something to prove, but also a young man that’s maturing, you hope, in his approach,” Bills coach Sean McDermott said earlier this week. “Not that he wasn’t mature last year in his approach, but sometimes you see, as we’ve all been around a team and watched these guys grow and develop and mature, that they’re growing up in front of our eyes. In Zay’s case, I would say that I’ve noticed a little bit of a more serious demeanor, not that he wasn’t before, but he seems focused, which I appreciate.”

On his first day of being full go at practice, Jones got into a tussle with safety Micah Hyde – displaying that serious demeanor.

‘My job is to focus on myself, what I can do to improve my game and help this team win,” Jones said Friday.

After that first wave of receivers, the next group in included Andre Holmes, Rod Streater and … Corey Coleman. A former first-round draft pick of the Browns, Coleman was heartily booed by fans a FirstEnergy Stadium after making a 7-yard completion in the third quarter – his only catch of the night.

“I expected it. I think they miss me,” Coleman said with a laugh.

During the last episode of HBO’s “Hard Knocks,” which is following the Browns this summer, Coleman was shown making a trade request to Cleveland coach Hue Jackson after being demoted to the second team.

Bills coach Sean McDermott said this week that “we’re getting to the point now where it needs to be … ‘here’s the playbook, you’ve got to know it.’ There will be some clarity around what his role is Friday night, so the biggest thing is that we want him to come out, play fast, and play physical.”

At this point, it’s hard to predict Coleman’s status when it comes to the 53-man roster. The Bills only gave up a 2020 seventh-round draft pick to acquire him, so it’s not a big investment. Still, it wouldn’t be a great look if the team gave something up for him, only to cut him weeks later.

The only receivers to make more than one catch Friday were Rod Streater and Austin Proehl. Streater finished with two catches for 10 yards, including a 3-yard touchdown reception from rookie quarterback Josh Allen in the second quarter. Streater is in competition with Coleman, Brandon Reilly and rookie Ray-Ray McCloud for one or two spots, with fellow rookies Robert Foster, Cam Phillips and Proehl looking like roster long shots through two preseason games. Kaelin Clay would also fall into that category, although he helped his cause with a 29-yard punt return in the fourth quarter.