If you didn’t know what war Army Cpl. Lawrence “Larry” Titzler served in, you would never guess his age.

He’s sharp as a tack, with a great sense of humor and steel-trap memory.

Born and raised in Buffalo’s Riverside section, Titzler said he rarely ventured outside his comfort zone until he was drafted in 1943 and sent overseas in 1944 as part of the Army’s 303rd Medical Battalion, supporting the 78th Infantry Division.

He had three close calls with death during World War II, but survived to tell the tale.

While his memoir has “war” in the title, it’s really a fond look back at a wonderful life, peppered with hometown references that will interest local history buffs. 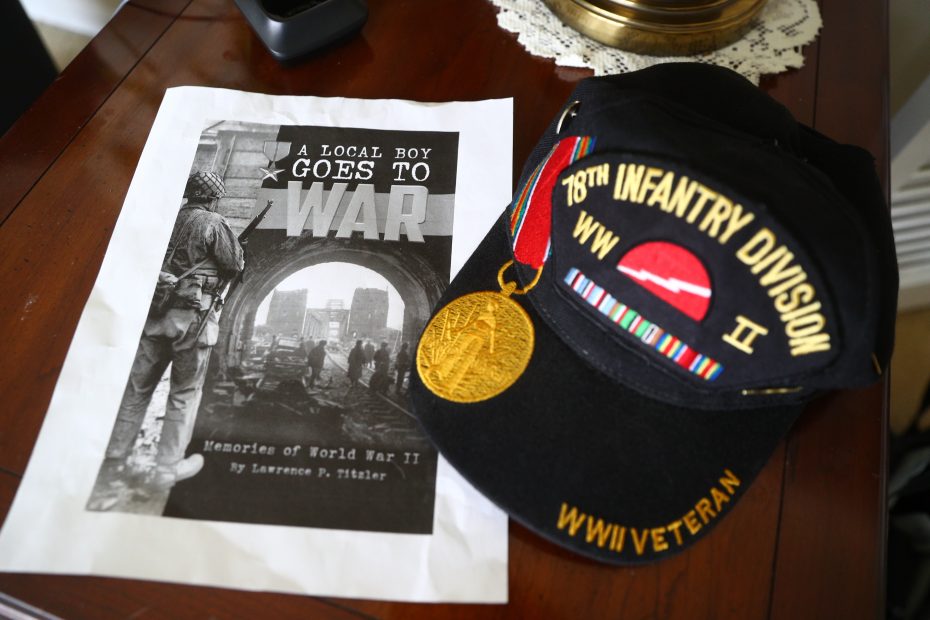 “It was the Great Depression and I spent my time at Riverside Park, where they had a swimming pool and baseball diamonds, as well as at the Riverside Theater,” he recently recalled in a conversation in his Tonawanda home. “Once in a while, my mother would take me on a streetcar downtown where she’d shop at Hens and Kelly and she’d take me to a movie at Shea’s Hippodrome or Great Lakes Theater, but that didn’t happen very often.”

This 1940 Riverside High School graduate completed a one-year program at the former Chown School of Business in Buffalo before joining Great Lakes Engineering Co. in Tonawanda. He was drafted and inducted into the U.S. Army Jan. 23, 1943.

“I had poor eyesight,” he recalled. “I was nearsighted and the doctor who examined me for the Army said I could either be 4-F or go into the Army. I decided I couldn’t stay home when everyone else I knew was going in the service and I felt I should contribute something to my country. You know, my mother and father never knew I had that choice. Never.”

The 19-year-old was first bused to Fort Niagara, followed by stints at Pine Camp (later known as Fort Drum) and at a Plattsburgh base on Lake Champlain. In 1944, after the Army shuttered its Army Special Training Program in engineering at Princeton University, which Titzler was attending, Titzler was assigned to the 78th Infantry Division, Company B, 303rd Medical Battalion, at Camp Butner, N.C.

“I had had no training as an infantry soldier, so they sent me to a medics battalion,” he said.

Titzler landed in England and traveled through France and Belgium before arriving in Germany. His first medical and surgical station on the front battle line was in a small hotel badly damaged by air strikes and artillery shelling in Lammersdorf during the Battle of the Bulge. 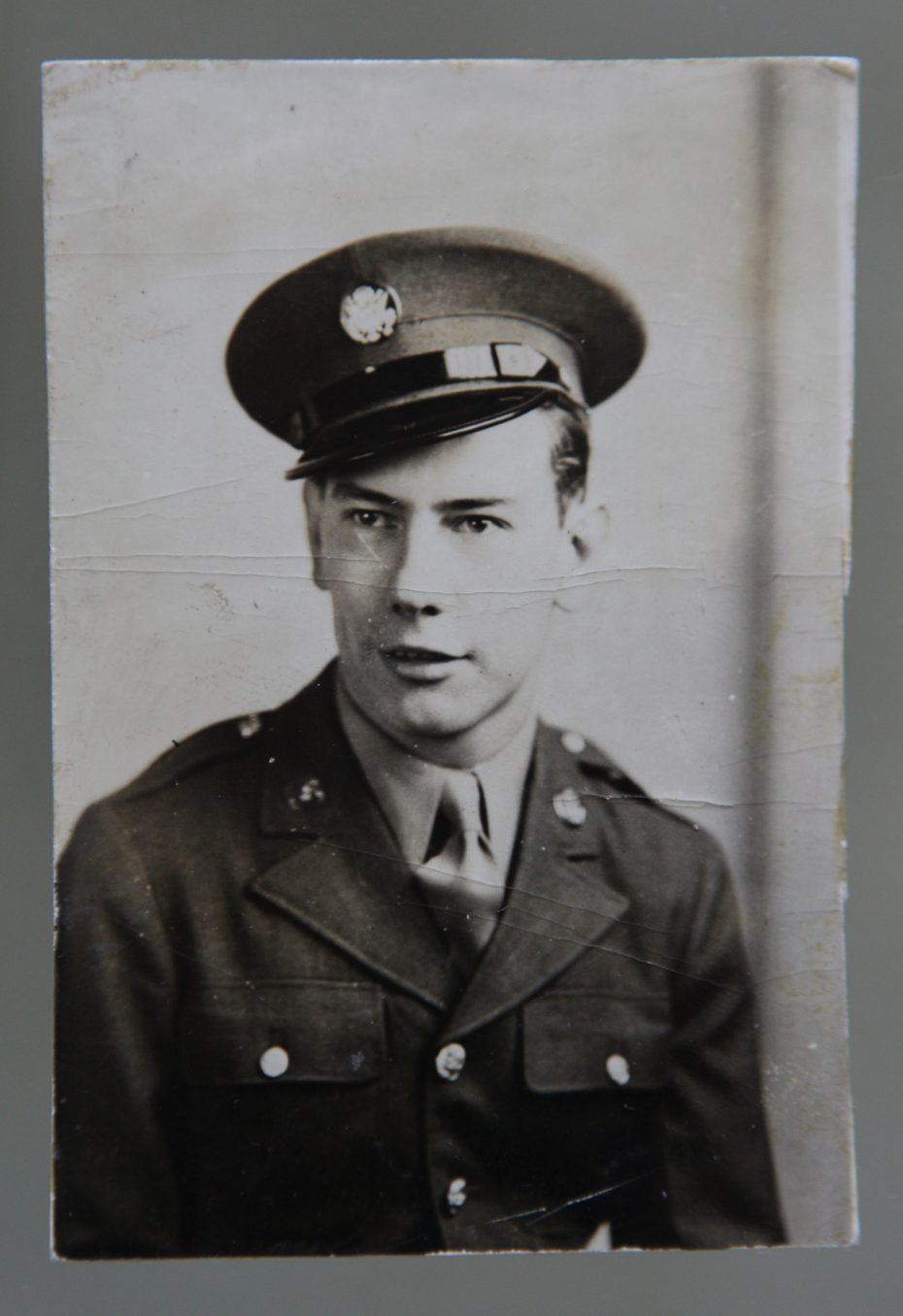 “We were the front line medical unit, bringing the injured from the battlefield,” he recalled. “We treated them as well as we could, but we didn’t have much equipment. We had to keep the soldiers alive and stable and then send them to a MASH unit, like you see on TV, which would be about 10 to 20 miles behind the lines. We were only two to three miles behind the lines.”

Along with serving as company clerk, Titzler acted as a courier between the Company B Medical Unit and the 310th Regimental Battalion Headquarters, two miles away.

“At 8 a.m. every day for a month at Lammersdorf I had to pick up a sealed package from regimental headquarters, which had the movements of the day,” he recalled. “I would hand them over to our company commander.

“On December 21, 1944, I got into the Jeep with the driver just like I had every other day to go to Schmitt to pick up the package,” he recalled. “We were just about to pull away and the company commander, Captain Andrew Heath, said, ‘Corporal, you’re staying here. I’m going. There are rumors that we’ll be making a big move today and I want to get the orders.’

“About 10 minutes later, somebody told me the Germans had made a direct hit with an 88-millimeter shell on the Jeep and killed our company commander and the driver,” he said. “That should have been me.”

“There was a guy who had gone AWOL,” Titzler said. “The MPs picked him up and he was assigned to our medics company. For some reason, he took a liking to me.

“There was a field next to our building,” he recalled. “It was January 1945 and I was outside with some other men. They saw some German planes in the sky and scattered but I guess I didn’t get the message. This fellow saw that I was out there and ran out and grabbed me and threw me into a six-foot drainage ditch with snow and ice in it and jumped in. The planes strafed the area but missed me.

“The third time was the end of March, when the U.S. military was advancing to the Rhine River and we had to cross a bridge,” he said. “The Germans had destroyed every other bridge over the Rhine but they hadn’t destroyed this one enough to drop it. It was an old railroad bridge.

“We were in the middle of the bridge and I was sitting in the back of a truck with all of the medical records -- I was in charge of them,” he said. “I could feel the bridge vibrating and swaying.

“I lifted the tarpaulin and could see the German planes,” he said. “I started talking to God. I thought, ‘This is it.’ But the bridge didn’t collapse! The U.S. Air Force came to our aid and scattered the Germans ... When I go to church, I thank the Lord a lot for what he did.

Titzler was honorably discharged in January 1946, five days shy of his 23rd birthday. He returned home and met his wife-to-be, Irene, a mere two weeks later. He attended the University at Buffalo on the G.I. Bill with the intention of becoming an accountant but decided that wasn’t for him and returned for a degree in education. He and Irene married in 1950, the same year he became a business teacher at Alden High School, and they had two children.

Titzler moved on to Tonawanda High School, where he worked for nearly 40 years as a teacher and administrator, retiring as an assistant principal in 1989.

“I’m still communicating with some of the kids I had at Tonawanda High School, even the kids who would get into trouble and come to my office,” Titzler said. “I’d have to send them to detention sometimes, but I was such a softy that I’d visit them in the detention room after school and they remember that!”

Titzler said he never discussed his Army days while he was a teacher or administrator, but started recalling war stories in his retirement. Friends urged him to write his stories down and he did, on scraps of paper here and there.

“That’s how it all started,” Titzler recalled. “They’d ask, ‘Why don’t you write a book?’ I said, ‘No one is interested in my career. Nobody will read this.’ But they persisted. One of my caregivers has a daughter, Ema Makas, who just graduated from Canisius College and she said she’d take my little notes and organize them into manuscript form. Jim Ostrowski, who’s a local lawyer and a publisher, said he’d publish it.”

The book is available on Amazon and may be ordered through local bookstores.