Five of the 13 Republicans being mentioned as possible candidates to replace Rep. Chris Collins in the 27th Congressional District on the November ballot don’t live in the sprawling district.

Neither do state Sen. Michael Ranzenhofer or developer Carl Paladino – although Paladino says he does own property, a farmhouse, in the 27th.

The residency question has been a big topic in the congressional race even before Collins was indicted on insider trading charges last week and announced that he won't seek re-election. That's because the Democratic candidate – Grand Island Supervisor Nathan McMurray – doesn't live in the district either.

In some ways, it's a purely academic question.

Candidates can run for Congress as long as they are at least 25 years old, have been a U.S. citizen for at least seven years, and are a resident of the state – in this case New York – when elected.

"Those three requirements – of age, citizenship and residents of the state – are the only ones that exist," said James Gardner, a constitutional and election law professor at the University at Buffalo School of Law. "They cannot be added to or modified by the state." 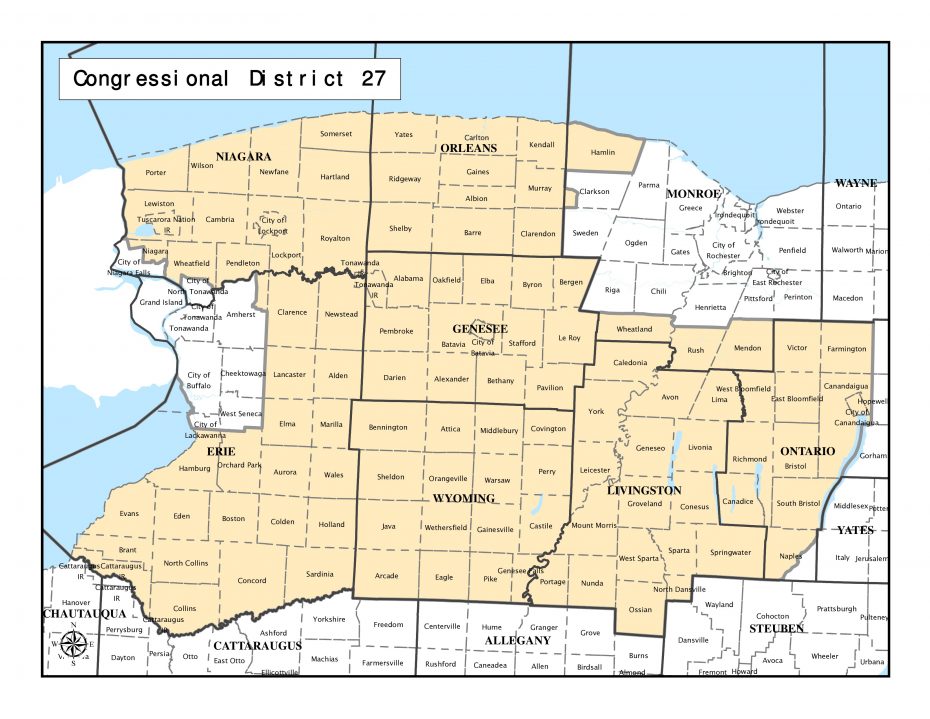 Attorney Ralph Mohr, the Republican commissioner at the Erie County Board of Elections, agreed. "It's in the constitution," he said.

It is, in fact, spelled out in the U.S. Constitution, written by the Founding Fathers in 1787, when all congressional representatives held at-large seats. Congress in 1842 passed a law establishing congressional districts to replace at-large seats within state boundaries. But when it did that, Congress didn't – and still hasn't – changed the residency requirements in the Constitution, Gardner said.

As a result, the 1787 rules govern the process.

"The Supreme Court has ruled it's unconstitutional to impose additional qualifications on members of Congress," Gardner said.

There are members of Congress who don't live in the districts they represent.

A 2017 study by The Washington Post found 20 of 395 members of Congress were registered to vote outside of the districts they represent. None were in New York State. In many cases, The Post found, redistricting may have drawn a representative's home outside of a district he or she had long served.

There are, however, some political reasons why members of Congress should reside in their districts.

"I think the voters have probably internalized a norm that you need to be a resident of the district," Gardner said.

Court battle likely in bid to replace Chris Collins on ballot
The Briefing: Was Collins' arrest Slaughter's last act?
How did Chris Collins get here?

And thus, the question: Do the candidates hoping to replace Collins live in the 27th Congressional District – a strongly Republican, largely suburban and rural region that runs from the East Amherst-Clarence border to the Finger Lakes?

Eight of the 13 Republicans being mentioned as possible candidates live in the district. In addition to Mychajliw, who lives in Hamburg, they are: radio commentator David Bellavia, who has lived in Orleans and Genesee counties, Orchard Park attorney James Domagalski, Erie County Legislator Lynne Dixon, Assemblyman David DiPietro of East Aurora, Assemblyman Stephen Hawley of Batavia, Assemblyman Ray Walter of East Amherst and state Sen. Patrick Gallivan of Elma.

Three of the five who live outside the 27th told The Buffalo News they would move into the district if they win the seat.

Rath currently lives in the section of Amherst in the 26th Congressional District, represented by Rep. Brian Higgins, a Buffalo Democrat. He said he resides about a mile from the 27th District, and his family is prepared to move into the district. In fact, he's already determined his children can remain in their current school district if the family moves into the 27th.

"My full intention after the election is to move into the district," Rath said.

Paladino, who lives in South Buffalo, also resides in the 26th District. But Paladino also owns a farmhouse in Orchard Park, with a stable where his wife rides horses. It would be easy for him to change his residence to the Orchard Park property, Paladino said.

State Sen. Robert Ortt said he would move into the district. "I'm a lifelong resident of Western New York and my current Senate district covers three of the eight counties comprising the 27th Congressional District," he said.

The other potential Republican candidates who live in the 26th District – not the 27th – are state Sens. Chris Jacobs of Buffalo and Ranzenhofer, who lives in Amherst. They did not return a call for comment on the issue.

McMurray, the Democratic candidate, who also lives in the 26th District, has pledged to move into the 27th if he wins the congressional race.

Of course, McMurray and other candidates for the 27th District won't be able to vote for themselves on Nov. 6 unless they actually reside in the district and are registered to vote there by Oct. 17, the last day a registered voter can change their address.

"I'm one of the few that can vote for myself," Mychajliw noted.