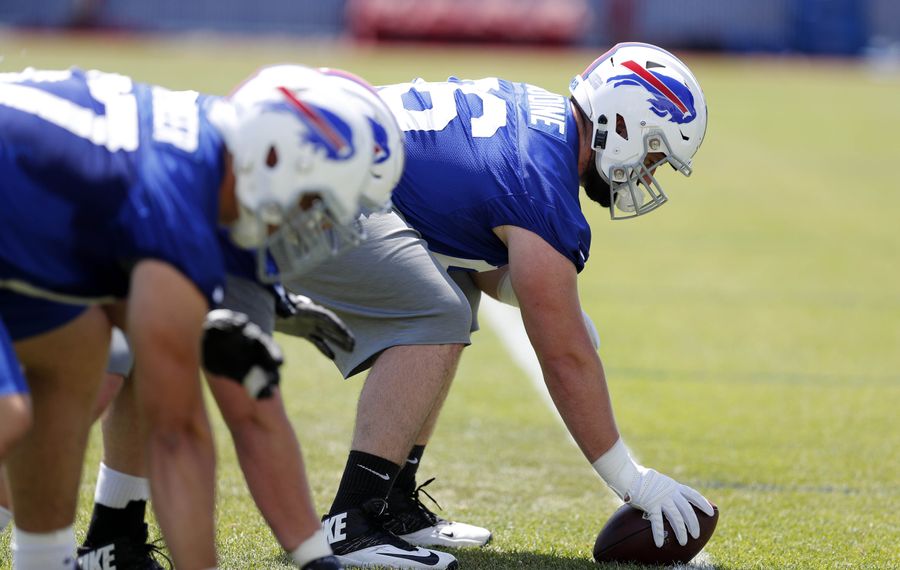 Russell Bodine learned to fall in line and march at a young age.

He learned about toughness and following orders and the importance of playing his position, whatever that might be, each cog in the machine critical to the success of the whole.

"There's a saying about Fork Union: ‘It's not always a great place to be, but it's a great place to be from,' " Bodine said this week, the Bills center recalling his experience at the vaunted military academy in Virginia. "That type of discipline is not always fun to be a part of. But I think it speeds up the maturation process for people and kind of gives you that attitude.

"Around there there's a lot of just, 'Go to work, do your job every day,' especially in terms of the football aspect. So you just kind of keep applying those same principles throughout your career, whether it's college, NFL, whatever, and it's certainly a big building block."

That experience is serving him well now. The hottest topic among Bills faithful is when rookie Josh Allen, the seventh overall pick in the draft, will take over as the franchise's starting quarterback and whether Allen, Nathan Peterman or AJ McCarron will start in Week 1.

But the man with the critical task of anchoring the offensive line — and snapping the ball to the eventual starter — also has yet to be determined.

And every day since Bodine signed a two-year, $5 million contract with the Bills in free agency, presumably to serve as the team's starting center but splitting first-team reps with Ryan Groy, he remains a good soldier.

"Obviously both guys want to play," Bodine said. "And when you're in there you just make sure you're doing your job and let things sort themselves out … This is obviously a team sport, so I don't even get hung up in whatever happens with me."

But make no mistake about it — Bodine aims to replace a franchise cornerstone. Longtime center Eric Wood suddenly retired in January because of a neck injury, leaving a gaping hole in the middle of an offensive line already in flux. Vladimir Ducasse switched from right to left guard to replace Richie Incognito, and John Miller is reclaiming the job at right guard after being benched early last season.

Bodine appeared to be the answer at center, and still might, his signing providing the Bills with a durable player with a wealth of playing experience.

Bodine started every game the last four seasons since the Bengals drafted him out of North Carolina with a fourth-round pick in 2014. That job was his from the jump. He took snaps with the first team as a rookie in minicamp and started since his first preseason game.

But he has not been well-regarded by Pro Football Focus, which ranked him 28th among 39 qualifying centers last season and gave him a 46.9 overall grade (out of 100).

Bodine chose Buffalo over a five-year contract offer with minimal guarantees to remain with the Bengals, citing the Bills' fervent fan base and "upward trajectory" evidenced by their playoff berth last season.

"That was the intention coming here," Bodine said. "I could have stayed in Cincinnati. I chose not to. And obviously that's the goal."

But aside from $2.15 million guaranteed, the Bills have handed him nothing.

Groy, who started the first preseason game, has served as the primary competition.

The two have rotated throughout training camp.

"As far as I know, we're going to continue to rotate," Bodine said, "and it is what it is."

Groy is a bigger player — he's listed at 6 feet, 5 inches, 320 pounds, compared to Bodine at 6 feet, 3 inches, 308 — and has demonstrated impressive durability, as well, setting a school record by playing in all 54 games of his college career at Wisconsin, starting at multiple positions along the line.

Groy entered the NFL as an undrafted free agent with the Bears in 2014, was signed off the Buccaneers practice squad by the Bills in 2015 and acquitted himself well as the team's starting center for seven games in 2016, after Wood broke his leg. He found that experience invaluable.

"I learned a lot about the game," Groy said, "a lot about the guys I was playing with, picked up on a lot of keys, and it's brought me along more as a football player and a center, reading defenses and that kind of stuff. That experience helped my confidence."

He's once again making the most of his chance to replace Wood.

"It's an unbelievable opportunity," Groy said. "It's really what we play the game for. You're not playing the game to be a backup. Everybody's fighting for a starting job. At the end of the day, that's why we're here."

It's unclear which player will start at center for the Bills' second preseason game Friday at Cleveland. Bodine is the safe bet, should the rotation continue. But they should each get plenty of snaps.

"Both have played well. I like the way that both young men have (impacted) our football team and the offensive unit in particular," McDermott said. "Both have strengths and I've been impressed to this point with (third-string center) Adam (Redmond) as well."

Because versatility bolsters depth and he's able to play several positions, Groy might best serve the team as a backup. He's able to play all three interior positions and has even lined up as a blocking tight end.

"It's always important," Groy said. "It's always something that you need to have in the back of your pocket and being able to play multiple positions keeps you valuable."

In the meantime, he's getting every opportunity to earn the starting job at center, pushing a veteran free agent acquisition whose next NFL game on the bench will be his first.

"That's kind of part of a performance industry," Bodine said. "You definitely have to be on top of your game every day. When you're in there, you have to make sure you're doing your job. And if you're not doing your job, they'll find somebody else who will."