The Phoenix debuted in 2013, a fire-gutted barroom transformed into a modern restaurant with refinished wood floors, banquettes and paintings on the walls. It offered Black Rock another choice between tavern and hipster haven. For a few months this spring, it looked like the lights had gone out for good.

Then came the news that its former bartender, Dave Kahris, was taking over with Sarah Mann Kahris, his wife. The kitchen staff was staying the same, and the menu wasn't supposed to change much, except for dishes added to broaden its gluten-free offerings. The restaurant's name wasn't changing much, either.

With a nod to the address on Amherst Street, it would be The Phoenix at 269. Same as it ever was? That's a goal more often attempted than achieved in the restaurant business, where one player in the orchestra can change its tune. So I swung by to see if the song remained the same.

As I pulled into the parking lot, I recalled that the restaurant is gifted in the real estate department. The place has all the parking it could ask for. The brick-surfaced patio out back, lined with flowerbeds, was an apt spot to soak up the lush breezes of a temperate July evening. 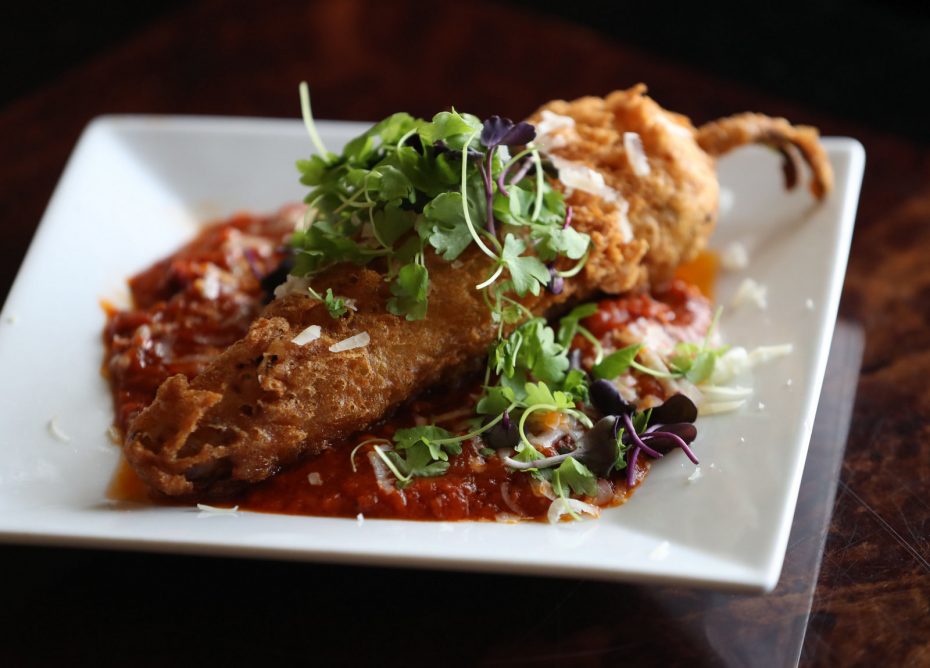 The menu is brief, one side of a card and a specials list, which our kind server turned over in writing so we might peruse it at our leisure. Halibut with avocado pico de gallo ($29) stood out from the crowd, along with an off-speed stuffed pepper.

Filling the chili with sausage and cheese in the usual Buffalo style wasn't death-defying enough, so this model was subsequently dipped in beer batter and deep-fried ($8).

Clearly, this anomaly required investigation. It arrived on a field of tomato sauce snowy with fresh-grated Parmesan and verdant with green and purple microgreens. Slicing it open released a cheesy cascade.

Gentle pepper heat set against tomato sweetness, crunch of crust against pork-and-dairy richness, made me glad for once there was no bread basket, or I would have ruined my dinner on mop-up duty.

Fried calamari ($10) was well-received, too, its thinly crusted, tender rings and tentacles arriving in a tangle of arugula and tangy pickled yellow pepper rings. Herby lemon aioli was acidic enough to add a pucker factor. 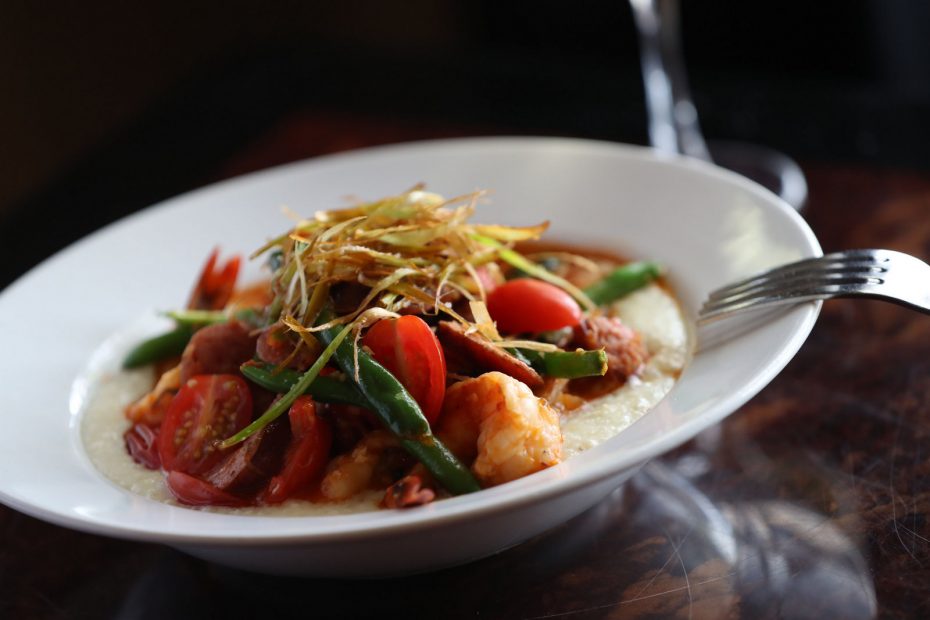 Shrimp and grits at The Phoenix at 269. (Sharon Cantillon/Buffalo News)

I resisted the siren song of the Friolator long enough to ask for gazpacho ($7), thinking of tomato season. The bowl of cool soup had crunchy texture instead of being pureed to baby food, which I appreciate, with tickles of sweetness and heat.

Alas, it tasted more of cucumber than tomato, leaving me off-put. Our server observantly asked about it. I made a face, and she said she would take it off the bill, flipping a negative into a positive. Later, she wiped clean our table after we had mucked it up, without being asked.

Sauteed artichoke hearts ($14) were served long-stemmed, pan-fried in an eggy batter and slicked with a briny, tangy and rich sauce of capers, butter and lemon, crowned with a topknot of arugula salad. They were plenty flavorful, if not as poufy as my favorite version.

Entrees held over from the first Phoenix menu include shrimp and grits ($24), a saucy saute of smoky andouille sausage, grape tomatoes and green beans, with shrimp, over a bed of grits. The coarse corn mush beneath it all, fortified with cheese, was its own satisfaction. The tail-on shrimp were firm, not rubbery. Together, they composed my favorite dish of the night. 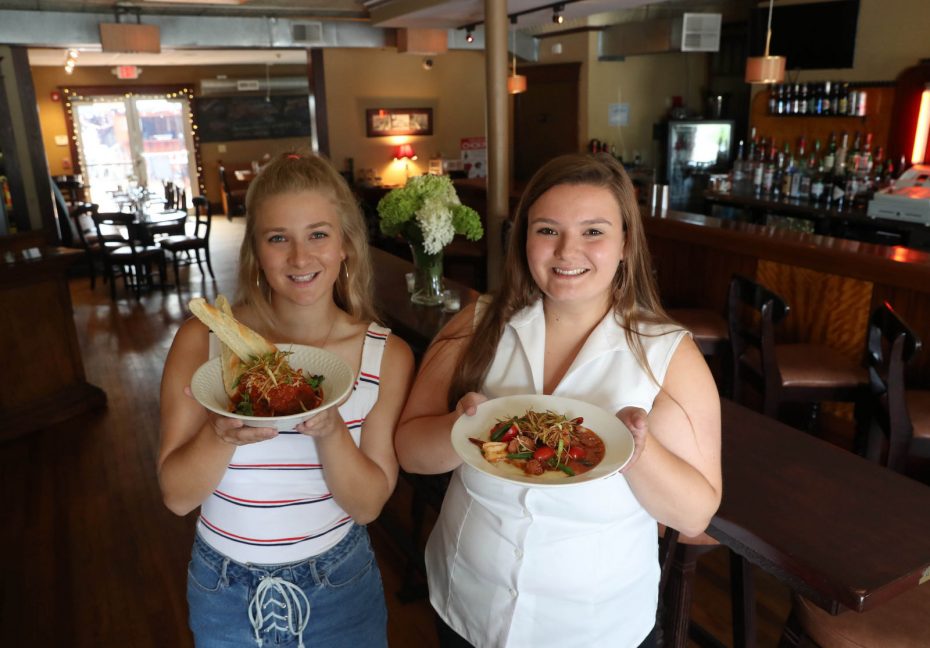 The owners' daughters serve as hostesses at The Phoenix at 269. Iris Kahris, left, presents the angus beef meatball, and her sister Lillian presents the shrimp and grits. (Sharon Cantillon/Buffalo News)

A chicken Milanese sandwich ($15) came with hand-cut fries, which were worth eating, not just filling out the plate. They had been cut and cooked so that the potato peels added an extra edge of crispness to every other baton, and served with more of that lemony mayonnaise.

Poultry had been pounded, crumbed and fried for the cutlets, which were still moist inside, stacked on a big toasted roll. The classic setup is with fresh mozzarella, tomato, arugula and a balsamic drizzle, which were absent by request, to soothe a younger palate.

That halibut ($29) was spice-crusted and pan-seared until its flesh was flaky and its skin was a crackery treat, then perched on a disc of rice that had been compressed into a chewy doorstop. Avocado pico de gallo was sliced avocado with a diced salsa that was plenty fresh but lacked zip, as if from chile or citrus. 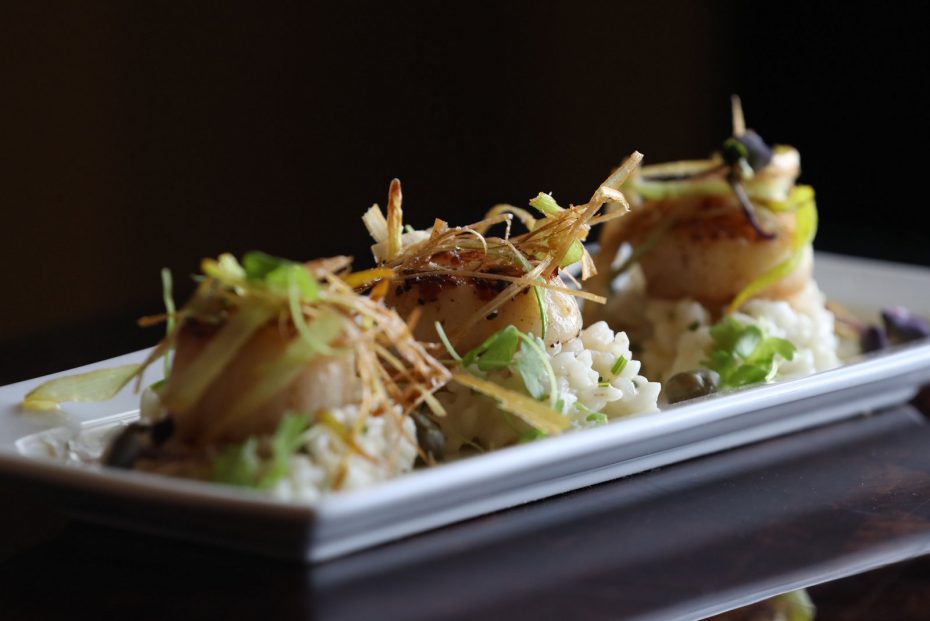 Spicy tofu noodles ($19) was more fun than you might expect from a gluten-free vegan entrée. Rice noodles were tossed with grilled tofu, sautéed shiitake mushrooms, green beans and peppers in a light, gingery sauce. It was a bit pricey, though.

Desserts ($6), not made in house, included a flourless chocolate cake the consistency of chocolate butter, key vibrantly citrusy lime pie, and a hot fudge sundae.

In the end, if it wasn't for a smaller, briefer menu I would have been hard-pressed to tell you what was different about this Phoenix. As I left, I recalled that its mythical namesake rises from the ashes more than once. 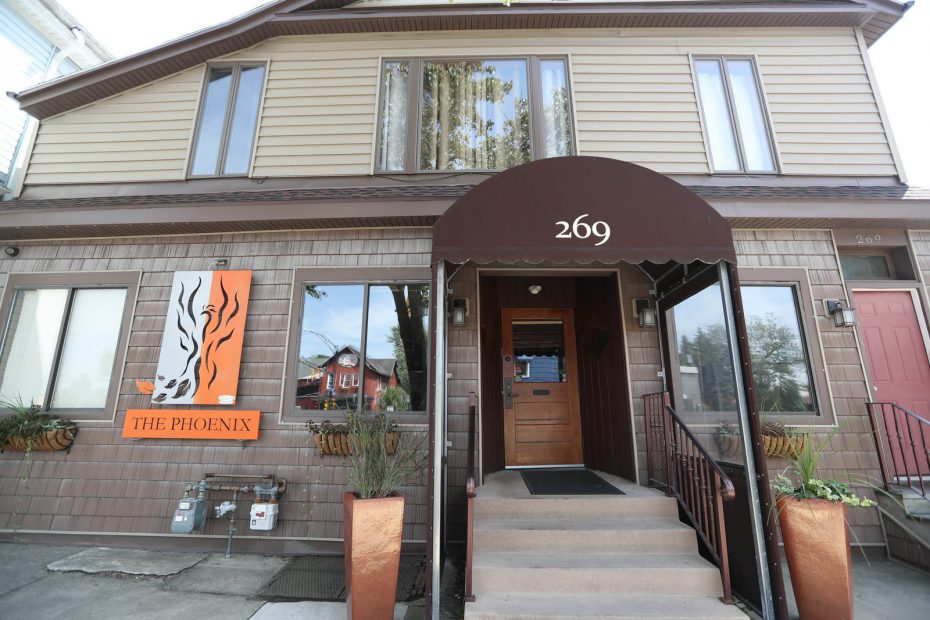 The Phoenix at 269 is at 269 Amherst St. in Black Rock. (Sharon Cantillon/Buffalo News)