PITTSFORD — The Buffalo Bills said goodbye to St. John Fisher College on Wednesday for another year, wrapping up their 19th training camp in suburban Rochester.

Here’s a look at some of the standout performers and memorable moments from the last three weeks:

Not only is the 30-year-old the best player on the field every time he steps between the white lines, he might be even better than he was a year ago. Coach Sean McDermott said that McCoy looks “quicker, faster and more powerful than last year.” Coming off a Pro Bowl season that featured 1,138 rushing yards, McCoy will again be the focal point of the offense.

Coming off a Pro Bowl season, Hyde has grown into a leadership role on the defense. As the quarterback of the secondary, he has consistently looked in command. Along with Jordan Poyer, the Bills should have one of the best safety tandems in the NFL.

Almost every practice, Croom made an impressive play or two. The former basketball player spent last year on the practice squad. He has the athleticism to create mismatches, and is constantly working after practice with tight ends coach Rob Boras on becoming a better blocker. Offensive coordinator Brian Daboll is demanding of his tight ends, and Croom is responding to the challenge.

Bills Mailbag: Grading each of Buffalo's additions in free agency

Signed late in the 2017 season, Murphy has steadily risen up the depth chart during training camp. He has shown good hands out of the backfield and an ability to make defenders miss in the open field. Murphy stands a good chance of earning a spot on the 53-man roster, maybe squeezing Travaris Cadet or Taiwan Jones out of a job along the way.

Mills was at the center of the two biggest scuffles of training camp, both times getting into it with defensive end Jerry Hughes. In the second of those fights, even team captain Kyle Williams got involved and started throwing punches at left guard Vlad Ducasse. Mills brushed off any lingering concerns about the altercations. He clearly has a way of getting under the skin of the defensive line – Hughes in particular.

Cornerback Tre’Davious White said it best: “That guy can ball.” Bush has found himself on the field with Hyde and Poyer when the defense goes to its “big nickel” package. That was a role rookie safety Siran Neal was expected to fill, but instead it’s been the 31-year-old, eighth-year veteran. Bush plays with a physical edge and created plenty of turnovers this summer. He will provide some much-needed depth at the position. 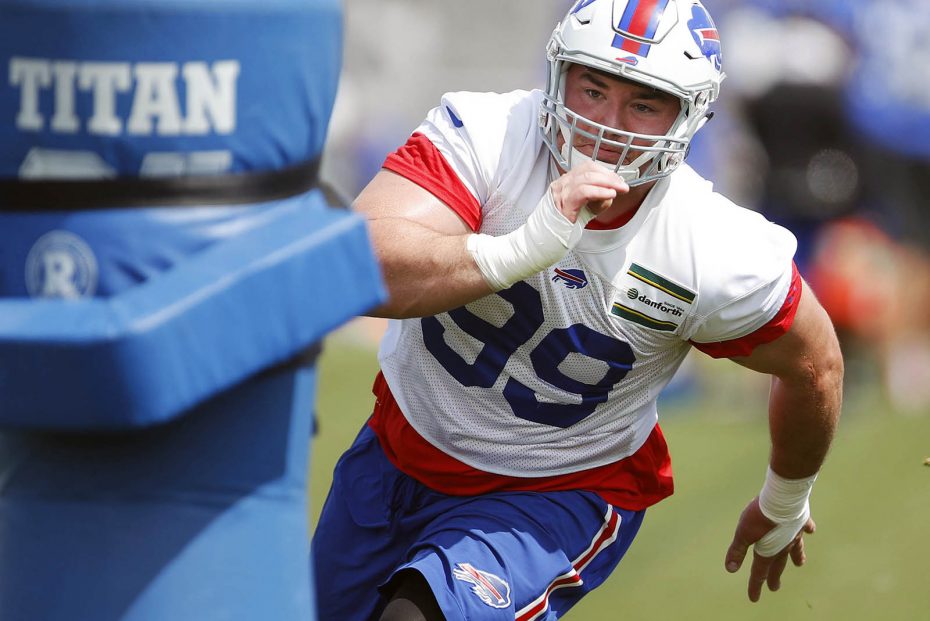 Phillips had a sack in the preseason opener, continuing what has been an impressive showing as a pass rusher. Initially thought to be a run-stuffer first and foremost, he’s shown an ability to disrupt the pocket. Phillips will start the season backing up Star Lotulelei, but coach Sean McDermott likes to rotate heavily on the defensive line, so the rookie will get plenty of playing time.

The Bills thought enough of McDermott to keep him on the 53-man roster all of last season, even though he hardly played. There was a hope in the spring McDermott could challenge Mills for the starting job at right tackle, or at worst serve as the team’s swing tackle – the top backup to both starting jobs. Instead, he’s been demoted to the third team and now faces an uphill battle to once again make the roster.

It was a quiet camp in this regard, especially compared to last year, when General Manager Brandon Beane shocked the NFL by trading Sammy Watkins and Ronald Darby in separate transactions on the same day. Coleman was acquired from the Cleveland Browns for a 2020 seventh-round draft pick, an admitted low-risk acquisition by Beane. Given the Bills’ need for speed, it’s worth seeing if Coleman can capture the form that made him a first-round pick in 2016.

A groin injury has severely limited Murphy over the past couple weeks. McDermott admitted that the team is “trying to figure it out.” That doesn’t sound encouraging. Murphy was with the starters at the beginning of camp, so it’s clear the team has a big role in mind for him. He won’t be able to fill that, though, if he can’t stay on the field. In his absence, Shaq Lawson has gotten plenty of work with the starters. Lawson has gone from being a player prominently mentioned as a trade candidate to an important part of the defensive line because of Murphy’s injury trouble.

Every summer, Hughes is a handful for the offensive line to stop. He seems to constantly be in the backfield. The Bills’ sack total was low last year, so it’s important that Hughes carries over his traditionally strong summer to the regular season.