Before any physicists gag on that headline, I'm referring to what is known as the "latent heat of condensation."

When water condenses on a can of beer, those droplets will shortly cause the beer to warm up. The conversion of the condensed droplets to water vapor transfers heat, which can warm up your beer in a relative hurry. (OK, it can be pop, too.)

This is not one of humankind's big crises, true. But an article released recently by the University of Washington reminded me this simple example can be used to explain how this important law of physics may have a growing impact as the climate warms.

To begin, University of Washington atmospheric science professor Dale Durran points out in the article the most important way in which a beer koozie keeps beer cold is by preventing this condensation and the latent heat which would have been transferred when the droplets were converted to a gaseous state of water vapor. By the way, it takes the same amount of energy to convert water vapor back to liquid droplets as it does to convert droplets to water vapor. One gram of water requires 600 calories of energy for such conversions, either from liquid to gas or vice versa.

In the case of a can of beer, Durran calculated very humid hot air, often found near the Persian Gulf and Arabian Sea, could warm that can from near-freezing to 48 degrees F in just five minutes by releasing the latent heat of condensation.

In nature, of course, we're dealing with much bigger versions of these processes on a far grander scale. When water vapor in the air condenses into clouds and larger droplets, the transfer of latent heat will provide more energy to lift the water vapor higher in a burgeoning convective cell, energizing showers and thunderstorms with more upward motion. The upward motion can eventually lead to the formation of hail, as seen in this National Weather Service cross section: 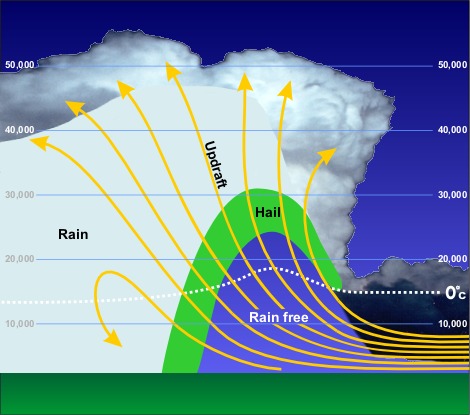 The change of state to from liquid to ice and back to liquid when the hail melts always involves latent heat either being absorbed by the ice when it melts or transferred by the melted droplets when they go back to a gaseous state.

On balance, the back-of-a-napkin beer can calculation lends credence to the idea that latent heat of condensation plays a more dominant role in future warming rather than the latent absorption of heat from the change of state from liquid to frozen.

Just looking at the beer example, Durran said he was surprised that just a very thin coating of condensation of 4/1000 of an inch could warm the contents of a can of beer by 9 degrees. He and colleagues, along with students, designed experiments with widely varying conditions of temperature and humidity by which rates of latent heat transfer and absorption could be calculated more reliably.

As mean global warming progresses in most places — as per past articles, some parts of the globe warm while other remain somewhat cooler — the warmer atmosphere can hold much more water vapor than colder air. The latent heat transfer of more condensation in the air from the additional water vapor provides a feedback mechanism for even more warming, as well as additional heavy precipitation events from moist parcels of air being lifted in the warmth.

The conditions for thunderstorm development become more favorable more often — and in more places — with the presence of more water vapor. In moist regions, the cycle of latent heat transfer will likely be skewed toward outweighing that of absorption, in the big picture.

In arid regions, the lack of water vapor sent into the air by soil and plant life prevents much condensation from occurring. In temperate zones where moisture sources are more abundant, the transfer of heat — especially in convection — will become a bigger factor. At least a koozie can nip this process in the "Bud." OY.