After all, former Bills starting quarterback Tyrod Taylor is now considered the Browns starter; former Bills coach Gregg Williams is the Browns defensive coordinator; new Bills receiver Corey Coleman was acquired from the Browns; and many Bills fans were hoping the Bills would have a shot at Browns rookie quarterback Baker Mayfield before he was taken with the No. 1 pick in the draft:

Here are my top takeaways from Tuesday's second episode of “Hard Knocks: The Training Camp of the Cleveland Browns.”

Coleman Suggested Trade: The episode started with a focus on all the shoes that Corey Coleman has accumulated. Pretty quickly, viewers wouldn’t have wanted to be in his shoes. Some people on Twitter thought the receiver “demanded” a trade before he was sent to the Bills for a seventh-round draft choice in 2020. It was more like he suggested one to Browns Coach Hue Jackson. Coleman went into Jackson’s office and was told to ask offensive coordinator Todd Haley why he was working with the second team rather than the starters. “If you don’t want me to play, why won’t you all just trade me?” asked Coleman. It was more of a question, than a demand. You could see why Coleman didn’t want to talk to Haley. Before the brief Jackson discussion, Haley was rough in his criticism of Coleman even when passes thrown to him in practice didn’t appear to be catchable. From those comments, you might think Haley had made up his mind about Coleman before training camp began. The Browns got so little from the Bills in the trade for a former No. 1 pick that some Browns players made fun of how little he was valued.

Todd Haley is a Character: When he wasn’t criticizing Coleman, Haley showed a sense of humor. He made fun of some parents’ decisions to give the players their first names when they were born. No player responded by asking him why his parents named him Todd. 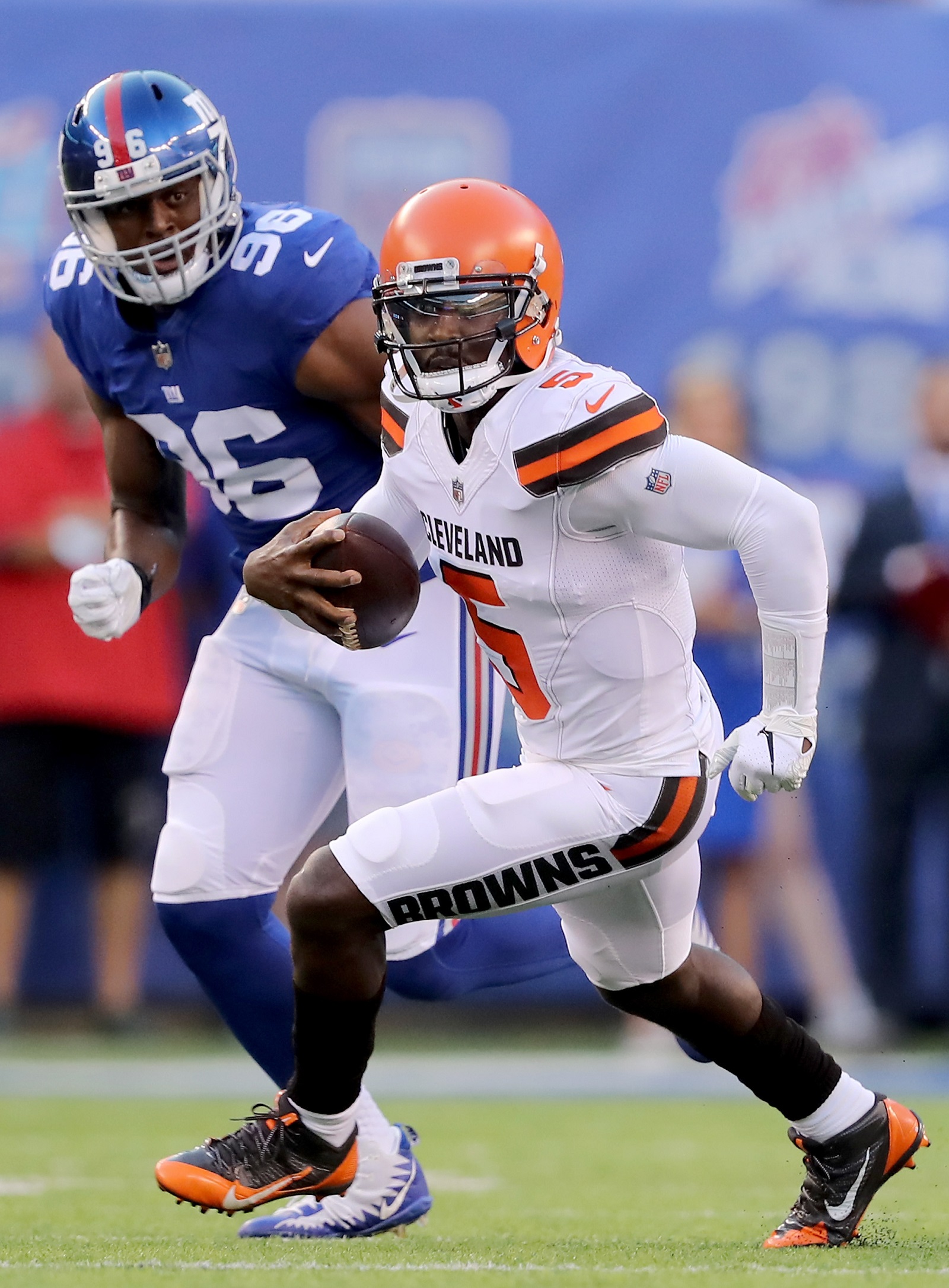 Tyrod Taylor, here in a preseason game against the New York Giants, has looked like a leader. (Photo by Elsa/Getty Images)

Tyrod Has His Coach’s Ear: Taylor looks more and more like a leader. He has Coach Jackson’s ear. He suggested the coach show video of the Browns’ lackadaisical play in practice before the coach did just that. Taylor also looked sharp in the one series he played in the Browns’ 20-10 victory over the New York Giants in their preseason opener.

This Season’s Underdog: Every season, “Hard Knocks” finds an underdog to follow in his quest to make the roster. Tight end Devon Cajuste is this year’s candidate and the story line is a potential tearjerker. His father, who has had three heart attacks, is a big part of the story.

Jackson Gives Second Chances: Browns rookie wide receiver Antonio Callaway tried to keep his citation for marijuana possession secret, but it eventually was revealed to the coaches and the general manager. Jackson and General Manager John Dorsey sat Callaway down to hear his version of what happened and they explained it can’t happen again without raising their voices. Callaway’s punishment? Apologizing to the team and being forced to play every down in the preseason opener. And Callaway can play. The receiver showed why he got a second chance when he caught a short pass from Mayfield and ran for a 54-yard touchdown pass. Shortly after that, a Browns announcer was heard on the team’s broadcast saying that showed why Coleman was traded. What, you can’t have two decent receivers?