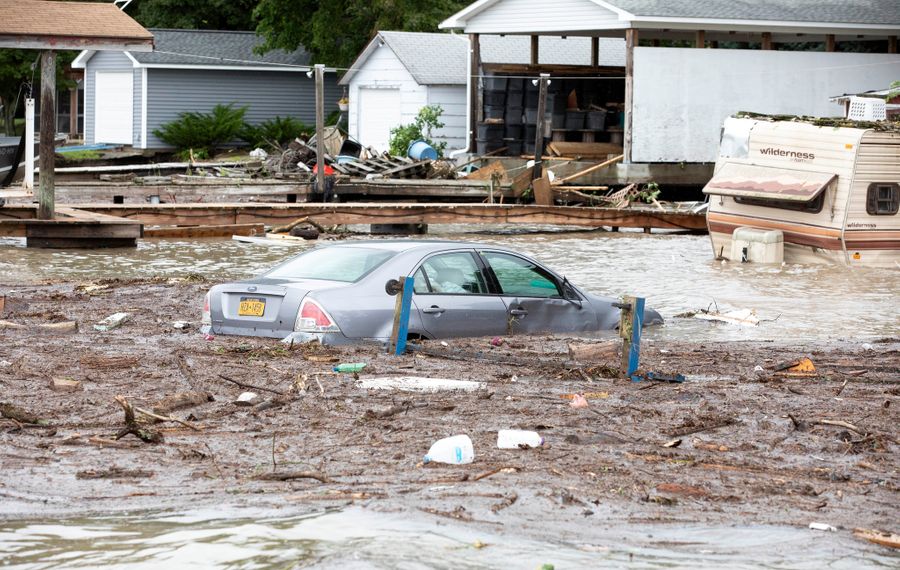 Heavy rainfall associated with a slow-moving storm system resulted in a dire weather situation in the Finger Lakes Tuesday.

Swift water rescues, flooded roadways and streams, creeks and lakes overflowing their banks were reported across a swath of west-central New York.

Only the far eastern end of the Buffalo Niagara region was impacted.

There was 4.11 inches of rain reported in Wellsville in Allegany County and 3.17 inches reported in Warsaw in Wyoming county, according to the National Weather Service.

The storm dropped as close to a half-foot of rainfall across some isolated locations. The heaviest spots were concentrated on the east side of Seneca Lake near Lodi and Hector, just east of Rochester in Fairport and Penfield and over Lake Ontario just north of Sodus Point, according to the state's Mesonet site.

More than 50 people were trapped amid debris and flood waters in Seneca County Tuesday, according to a report from Syracuse.com. Rising waters, swift moving currents and a four-foot wall of debris also trapped first responders attempting rescues, the report stated.

"This is a very dangerous situation," Cuomo said.

Luckily, there was only one report of a woman with a minor injury, Cuomo said.

The governor activated the State Emergency Operations Center Monday in anticipation of the potential for severe storms and flooding.

Flash flood warnings were posted throughout the region Tuesday, including at the St. John Fisher College campus where the Buffalo Bills were due to hold training camp today. The team closed Tuesday's practice to fans because of the weather.

As of mid-afternoon, the weather service said the center of the storm system was located in southeastern New York state.

"To its west, multiple clusters of showers and a few embedded thunderstorms continue to develop and circulate southwestward across the Finger Lakes Region and North Country," the weather service said, "while any activity over far Western New York has diminished to just some leftover spotty light showers and/or sprinkles."

It added: "Leftover scattered light showers and sprinkles west of the Genesee Valley will come to an end by early this evening with some partial sunshine also making inroads into extreme far western New York."

Forecasters at the Weather Prediction Center said 3 to 6 inches of rain were possible through mid-day Tuesday in areas of Central New York.

That would be among the highest precipitation recorded in the western and central regions of New York State on record. 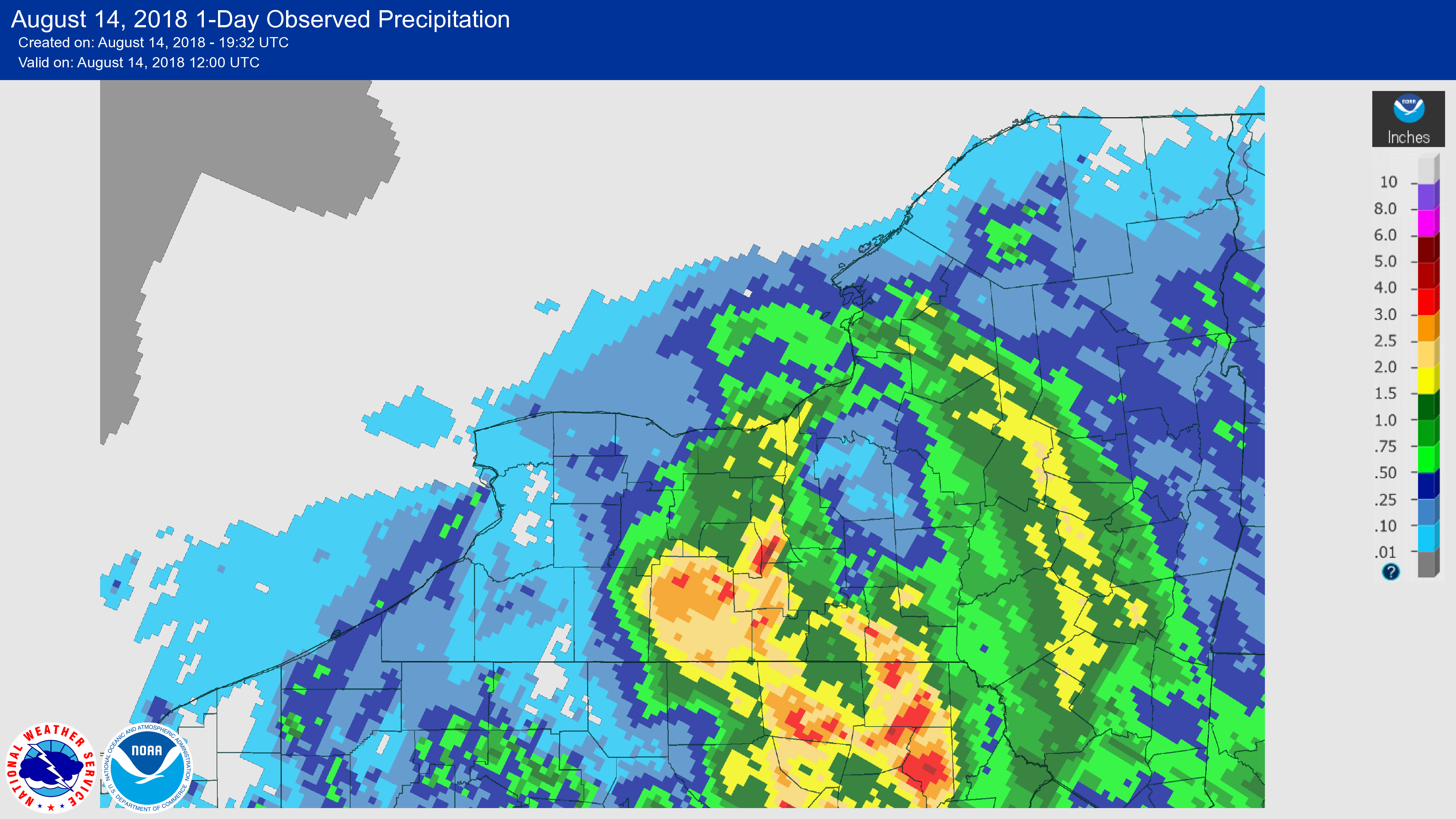 The heavy rainfall developed in association with a slow-moving cyclonic system that's pulled deep moisture from the south northwards. Weak steering winds kept the precipitation locked in place for hours as the heavy rain continued over the same locations, mostly south and east of Rochester.

The Niagara Frontier was just far enough west to avoid the deluge.

As of 4 p.m. Tuesday, National Weather Service reports showed that 4.31 inches of rain fell in Port Bay in Wayne County. There was 3.85 inches in Fairport.

Other rainfall totals included 3 inches from Walworth in Wayne County, 2.8 inches at Duck Lake in Cayuga County, 2.49 inches from Geneva in Ontario County and 1.97 inches in Pittsford.

Here's a look at some social media reports from the region:

I am at Lodi Point it looks like a hurricane hit it pic.twitter.com/sWdeugBt8W

Huge chunk of road has collapsed on route 129 Interlaken near Lodi due to Flash Flooding. Road is closed. Please be advised. @News_8 #SenecaCounty pic.twitter.com/5nS0hcjxvq

New video out of Seneca County, NY where residents and firefighters are trapped due to flood waters. pic.twitter.com/tWf7VxjYdx

Stream in Perinton overflowing into the Canal @News_8 @wnywxguy pic.twitter.com/Xy078yy2nt