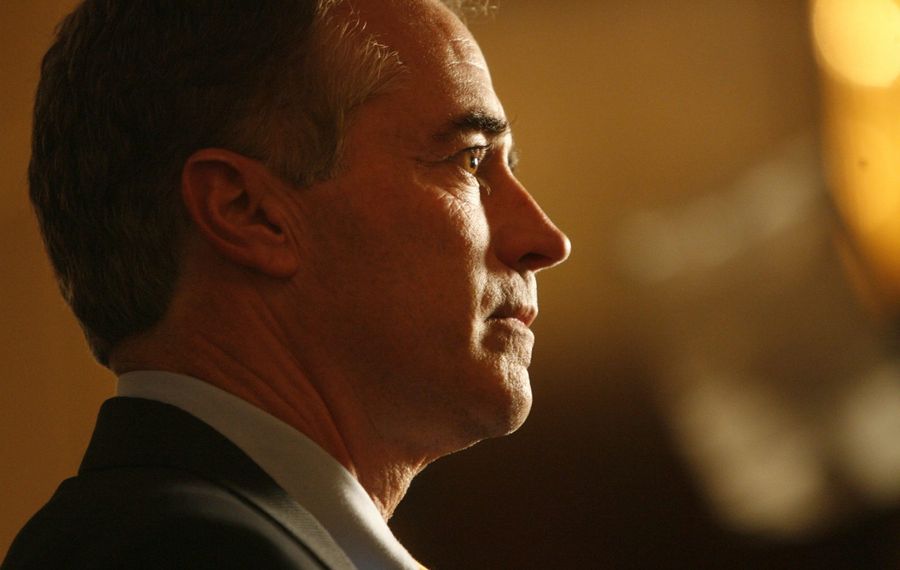 But it's a tough thing, too, for Republican leaders in New York's 27th congressional district.

Collins' withdrawal from the race on Saturday left them with a complex legal effort to remove the lawmaker from the ballot and settle on a replacement candidate from about a dozen possibilities – including Carl P. Paladino, the lightning-rod Buffalo developer and 2010 GOP candidate for governor.

Meanwhile, Democrats piled on, hoping that Collins' decision to remain in office through the end of his current term would add to their chances of getting a surprise win in a largely Republican district, and maybe even a House majority.

Such was the political landscape in Collins' district Saturday after he announced he would not seek a fourth term.

"After extensive discussions with my family and my friends over the last few days, I have decided that it is in the best interests of the constituents of NY-27, the Republican Party and President Trump’s agenda for me to suspend my campaign for re-election to Congress," said Collins, a Republican from Clarence, in a statement.

While Collins wouldn't discuss his decision to end his candidacy in any detail, other GOP sources said he faced enormous pressure from top Republicans in the district to withdraw.

County party leaders feared that there was no way an indicted congressman could win – even in a largely suburban and rural district that, according to the fivethirtyeight.com website, is 22 percentage points more Republican than the nation as a whole.

“Given the gravity of the charges, the likelihood of him conducting an active campaign were slim,” said Nicholas A. Langworthy, the Erie County Republican chairman. “He could not effectively communicate a positive message without first addressing the other situation.”

Court battle likely in bid to replace Chris Collins on ballot
The Briefing: Was Collins' arrest Slaughter's last act?
How did Chris Collins get here?

In his statement, the congressman said: "I will fill out the remaining few months of my term to assure that our community maintains its vote in Congress to support President Trump’s agenda to create jobs, eliminate regulations, reduce the size of government, address immigration and lower taxes.

Collins' statement comes three days after federal prosecutors in Manhattan charged him with securities fraud, wire fraud, conspiracy and lying to a federal agent. Prosecutors accused Collins of tipping off his son, Cameron, to inside information on Innate Immunotherapeutics, an Australian biotech firm in which they were both heavy investors.

Cameron Collins then started selling his Innate shares and told others the bad news, allowing them to escape losses that other investors suffered, prosecutors said. Cameron Collins and his prospective father-in-law, Stephen Zarsky, also face federal charges in connection to their stock trades. They have all pleaded not guilty.

"I will also continue to fight the meritless charges brought against me and I look forward to having my good name cleared of any wrongdoing," Collins said in his statement.

He will continue in office in a much-diminished role. House Speaker Paul Ryan has removed Collins from his key slot on the Energy and Commerce Committee, and Collins, while under indictment, is unlikely to continue in his role as a much-televised defender of President Trump.

Outside his home in the wealthy Spaulding Lake community in Clarence on Saturday, Collins declined to discuss any potential successors and asked for privacy.

“I’ve made a decision to withdraw and it’s up to the party to decide,” he said.

From comeuppance to compassion: Neighbors on Chris Collins' withdrawal

Collins' move upends the race for Congress in New York's 27th district, a deep-red stretch of suburbs and farmland that stretches from Youngstown to Dansville.

Republicans in the district now face the complicated question of how to remove him from the ballot.

Under New York law, a candidate's name can be stricken from the ballot only if he or she dies, runs for another office or possibly if he or she moves out of state.

That means Collins – who also has a home in Florida that he frequently visits in winter months – could conceivably try to change his legal residence to Florida, thereby allowing county chairs in the district to nominate a replacement candidate.

But former Rep. Thomas M. Reynolds, a Republican who represented the district a decade ago, said state election law is unclear as to whether a federal candidate such as Collins can remove his name from the ballot by moving out of state, or if that election law provision only applies to candidates for state office.

That being the case, other Republican leaders in the district discussed the possibility of finding another race in the state – perhaps a county clerkship in a deep-blue Democratic county – that Collins could run for and lose.

If Collins were to run for such a seat, he would be able to resign, leaving a vacancy that primary voters would not have the chance to fill. With the congressional primary already past, it would be up to county Republican chairmen in the district to settle on a new candidate.

Langworthy, the Erie County GOP chairman, said leaders of all eight Republican organizations in the district will meet early in the week to begin the process. He emphasized the top priority will be for all to agree on the process and the candidate.

“Most likely, there will be an interview and screening process,” he said. “And we've got to have consensus – all eight counties working together.”

Settling on a replacement GOP candidate could be a cumbersome process for the district's county chairs, if only because at least 11 names were being floated as possibilities — including the controversial Paladino.

Other possible Republican candidates include:

Mychajliw proved to be the most aggressive of the bunch, declaring his candidacy an hour and 6 minutes after Collins withdrew and immediately attacking the Democratic candidate, Grand Island Town Supervisor Nate McMurray.

"As a proud Republican and conservative supporter of President Trump, I cannot stand by and let this critical congressional seat fall into the hands of a radical left wing candidate who will be a vote to impeach President Trump," said Mychajliw, who lives in the Village of Hamburg, in a statement.

Meantime, both Walter and Ortt issued statements of interest – and Walter's took an only slightly veiled shot at Mychajliw.

"In the coming days, I look forward to having the necessary conversations needed to put forth a unified candidate," said Walter, of Amherst. "No one candidate can bull rush through the party process."

Ortt, meanwhile, highlighted his service in Afghanistan in the Army National Guard.

"Just as I answered the call to serve my country after the events of Sept. 11, I will answer the call should I be asked to serve the constituents of New York’s 27th Congressional District," said Ortt, of North Tonawanda.

Dixon told WIVB that she would not rule out a run.

One prominent name – Assemblyman David DiPietro of East Aurora – appeared to withdraw his name from consideration in a tweet that said: "I am busily and happily running for re-election to the Assembly." But later in the day DiPietro said that tweet by no means meant that he would not accept the congressional nomination.

Democrats long ago settled on a candidate – McMurray – and he led what seemed to be a unified party effort to attack Collins' decision to stay in office for now as a sure sign of Republican corruption.

"He needs to do the right thing and just resign," McMurray said of Collins.

What's more, McMurray said, Republican leaders should be faulted for even renominating Collins, given that his stock trades were already the subject of a House ethics investigation at the time he started running for re-election.

"He never should have been endorsed or nominated," McMurray said. "It speaks to a broken system that he was even able to run."

"This is raw arrogance," he said. "If Collins is unable to campaign because of his legal woes, he is also unable to represent our community. He must admit guilt and resign now."

That seemed to be a recurring theme on the national level as well.

House Minority Leader Nancy Pelosi took to Twitter to insist that Ryan, the House speaker, call on Collins to resign. But Ryan, a Republican from Wisconsin who will leave Congress as the same time as Collins, did no such thing.

Pelosi's tweet also included an unsubtle reminder that Collins was the first House member to endorse Donald Trump for president.

"No person is above the law, not the President or his first supporter in Congress," said Pelosi, a California Democrat.

Democrats are making Republican corruption a headline issue that may help them win control of the House in the fall midterm elections, and they're hoping the Collins scandal will help them to that end.

But Collins, in his statement, said something that's likely to be a recurring theme in the race to save the 27th district seat for the GOP and to save Republican candidates nationwide.

"Democrats are laser-focused on taking back the House, electing Nancy Pelosi Speaker and then launching impeachment proceedings against President Trump," Collins said. "They would like nothing more than to elect an 'Impeach Trump' Democrat in this District, which is something that neither our country or my party can afford."