LONG ISLAND CITY – Jim Gaffigan was reflecting in the corner of a cavernous Queens soundstage, just across the East River from Manhattan, where he lives with his wife, Jeannie, and their five children.

“I don’t know if 10 years ago I could have made the brain-tumor stuff funny,” said Gaffigan, who was talking about his wife’s pear-sized brain tumor – which, as he points out, is better than a grapefruit-sized tumor … but still not funny. Not unless you’re today’s Jim Gaffigan. And not yesterday’s Jim.

Gaffigan, a tall, dad-bodied 52-year-old, is one of America’s most successful and celebrated stand-up comics. On this early-May morning in the recesses of the soundstage, he was talking to Journey Gunderson, the executive director of the National Comedy Center in Jamestown, and Stephen J. Morrison, a Hollywood producer.

The pair was working with Gaffigan to shoot a hologram show for the National Comedy Center, which would open in Jamestown three months later. The finished show runs about 12 minutes, most of which is Gaffigan, and takes place in the Hologram Theater located just inside the entrance of the comedy center. (Comedian Lewis Black also shot hologram footage after Gaffigan; his show will likely be released at a later date.)

At the shoot in New York, Gaffigan’s task was to describe his growth as a comedian by reflecting on three clips from his body of work, all of which would be converted into holograms for the Jamestown show: The first was from the ’90s, when Gaffigan was a young New York comic still searching for his voice.

[Read more: The stars have gone - what's next for the National Comedy Center?]

The second, which was from around 2012, highlighted Gaffigan’s ability to find comedy in things like food or, in this case, animals. The final clip was recent, and dove headfirst into territory that would jolt even experienced comics – a bit on his wife Jeannie’s brain tumor.

As a makeup artist touched up his reddish-blond hair and beard, Gaffigan told Gunderson and Morrison what he envisioned. “From a logical standpoint,” he said, “I see it as setting up why I am this self-deprecating, whether it’s personality or environment, and then it moves into talking about objects, whether it’s animals or food, and then it becomes personal at the end.”

Gaffigan has built a smashingly successful career around smashing himself. His specials have titles like the ironic “Mr. Universe” and “Noble Ape;” his two books are titled “Dad is Fat” and “Food: A Love Story.” His onstage uniform is strategically simple, like the blue button-down, khaki pants and black sneakers he wore for the hologram shoot. Gaffigan can work a room with his schtick. When he walked into the soundstage, he noticed a fold-out table with Pepperidge Farm cookies, Wheat Thins, granola bars and water.

A member of the small crew from the hologram company referred to a popular Gaffigan bit. “Hey, I apologize I didn’t bring any Hot Pockets for you,” he said to Gaffigan. “I know it’s your favorite. But next time.”

“Oh, thank you,” Gaffigan said politely. He’ll forever be playing to those food-animal-object references, but today it’s that personal material that signifies his growth as a comedian.

From pipe dream to game-changer: Jamestown's National Comedy Center is days from reality

The 90-minute shoot began with the hologram crew tending to the cameras and monitors, and Morrison, the executive producer of all the National Comedy Center’s content, taking extensive notes on his laptop. Gunderson listened for flow and details as Gaffigan, sans script, stood in front of a green screen and riffed through potential introductions:

Loosening up: “This is me as a hologram. I’m not normally this fat. This is just the technology.”

Feigning self-importance: “Welcome to Jamestown. It was nice of them to name the town after me.” 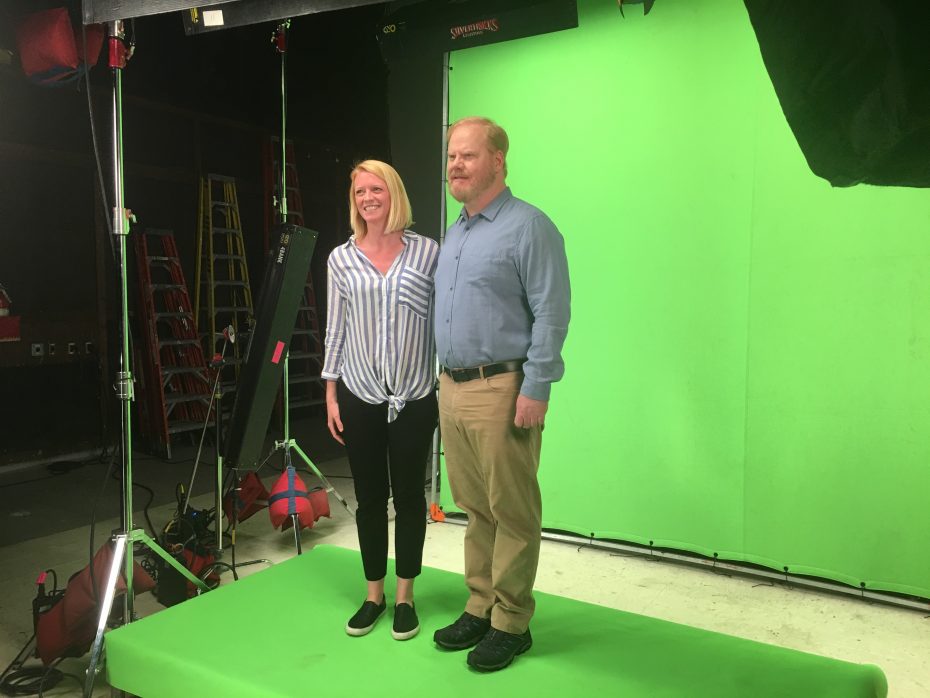 Journey Gunderson, executive director of the National Comedy Center, with Jim Gaffigan at a Silvercup Studios in New York City's Queens borough. Production of the hologram show was done by Dream No More Studios, and the equipment used to present it in Jamestown is from the Los Angeles company Hologram USA.

Explaining why he began his career by making fun of himself, rather than others: “As a white guy ... there’s nowhere to punch up. So I found punching at myself worked.”

The introduction that Morrison ultimately selected was dually funny and self-deprecating for both Gaffigan and the comedy center’s rural Chautauqua County location – 75 minutes from Buffalo, and seven hours from here in Queens.

“I’d like to welcome you to the comedy center here in Jamestown,” Gaffigan said. “I can only assume you’re lost.”

Explaining his early comic self, Gaffigan said, “I started in the early ’90s, and what I discovered immediately – it was probably part of my personality – is what connected me to the audience was making fun of myself. It was communicating a self-awareness. So let’s take a look at an early, early version…”

The first clip depicted a slimmer, slightly thicker-haired Gaffigan trying to seize the attention of a comedy-club crowd by bending his voice into a baritone series of hellos: “Hello, everybody! Hello. Hello. Hellloooooo.”

It’s not working great, which present-day Gaffigan readily admitted during the hologram shoot.

“I hadn’t been doing it that long,” he said. “But you know what? You’ll notice that not only was the material not going over that well, but I wasn’t that comfortable onstage. That’s just a fact of doing stand-up: The longer you do it, the better you get at writing, and also at feeling comfortable with the conversation with the audience.”

The second clip is Gaffigan’s spin on whales (and, if you read just beyond the surface, his own body, too). “They say swimming is the best exercise, but have you seen how fat whales are?” he said, soon flexing his vocal chords to mock a moaning whale wail.

“Whales always sound depressed, don’t they?” Gaffigan said. He imitates a whale: “Why am I so bad at hide and seek? The fish always find me.” And he pulls an onomatopoeia: “If fat made a noise, it would be BLUBB-buurr.”

Next up would be his bit about his wife's brain tumor. Playing hologram-show host in front of the green screen, Gaffigan experimented with ways to bridge a clip about blubber to a topic that, if not handled with extreme comedic delicacy, could make people blubber.

His first attempt started with a long, haughty ha-ha-ha-haaah cackle. “Whales,” Gaffigan said. “I know nothing about them. But I had a strong point of view…” Gaffigan plowed through several more takes, nipping and tucking at each. For a couple, he tried variations of “Ha-ha-ha-ha-ha, I kill myself! I mean, I’m not going to kill myself.”

In another, he extolled the benefits of wisdom that builds over a career. “You develop an ability to put self-assignments on yourself about things you’re going to discuss,” he said.

At one point, Gaffigan asked Morrison and Gunderson for feedback.

Finding the humor in bad news

Later, Gunderson motioned to the corner of the room, where earlier in the morning Gaffigan acknowledged that a decade ago, he never would have been able to crack tumor jokes. “For what it’s worth,” she said, “what you said over there I thought was really interesting, about ‘10 years ago I don’t know if I would have been able to make that funny.’ I thought that was pretty interesting.”

“Oh yeah, that’s great,” said Gaffigan, who then integrated both bits of feedback into the take that is now playing in the hologram show at the National Comedy Center. “You know what?” Gaffigan said. “I know nothing about whales. But I did know that I had a strong point of view on what I did know about whales. Over the course of years, I developed skills for writing and also performing topics that I necessarily wouldn’t be able to discuss in earlier versions of me. And as the years went on, I discovered that I could talk about a lot of things. Even tragic things.”

The tumor jokes, which are part of Gaffigan’s 2018 special “Noble Ape,” have a happy ending. It was benign, and fully removed, providing a healthy starting point for Gaffigan’s humor.

“The tumor is gone – along with my ability to ever win another argument,” Gaffigan says in the “Noble Ape” clip that plays in the hologram show.

Gaffigan’s comedic “bag of tricks,” as he called it off-camera during the shoot, also includes finding humor in the way bad news is delivered. In the “Noble Ape” bit in the hologram show, he says, “The surgeon told me the tumor was the size of a pear, which is scary but also confusing. It was like, ‘Did he go to med school or a farmer’s market?’ ”