It is a winning production, with three dozen talented performers in the ensemble filling the streets of fictional ancient Agrabah, all beautifully bolstering a pretty flimsy love story and even sketchier evil plot.

But we didn't come for the plot. We came for the magic, and Disney delivers it by the truckload -- as in truckloads of sequins and rhinestones, and a dangerous treasure cave that, if you aren't careful, you could die for, or in.

Acknowledging that the audience expects a night with fair share of abracadabra, the show begins with a welcome from the Genie, played by Michael James Scott, from the show's Australian production. Big voiced and jolly, the Genie promises that we will see him later before he disappears for a little too long. While we are waiting for him to return, we meet the rascally thief Aladdin and self-pitying Princess Jasmine, who sing out their sad backstories (while the kids around me fidgeted) before they finally meet and fall quickly in love.

The show is designed as much to see as it is to hear. Clinton Greenspan is a hunky charmer in the title role, and he has a lively marketplace set to run over with his three partners in crime, played with fine comic chops by Zach Bencal, Philippe Arroyo and Jed Feder. They make for a seriously mischievous trio, seemingly unaware that they are taking over a part played by a monkey in the movie. 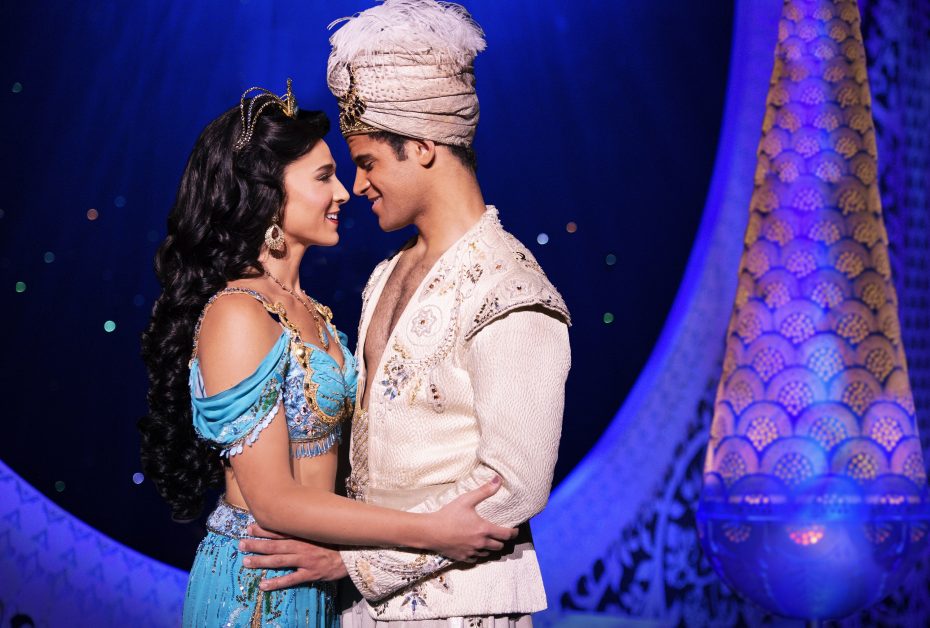 Jasmine (Lissa deGuzman) also gets her own backup trio, attendants played by Olivia Donalson, Liv Symone and Annie Wallace, who treat the princess's laments with a sharply deadpanned sarcasm. It is good they are there, because, except for them, "Aladdin" belongs to the boys.

The baddest boy, of course, is Jafar (Jonathan Weir), the wicked grand vizier who has an eye on being sultan himself. The movie bird Iago becomes a toadying human sidekick for the musical, and Jay Paranada turns him into one of the backup stars of the show. We get one little nod to the feathered honcho when, after Iago repeats his proclamations Jafar shoots back, "Really Iago, must you parrot everything I say?!"

They do their part, as does Jerald Vincent as the unobservant sultan who misreads everyone he meets, but the real stars here are, in order, the Genie, the cave of treasures, and Aladdin and Jasmine's romantic flying carpet ride against a backdrop of ever-changing stars. 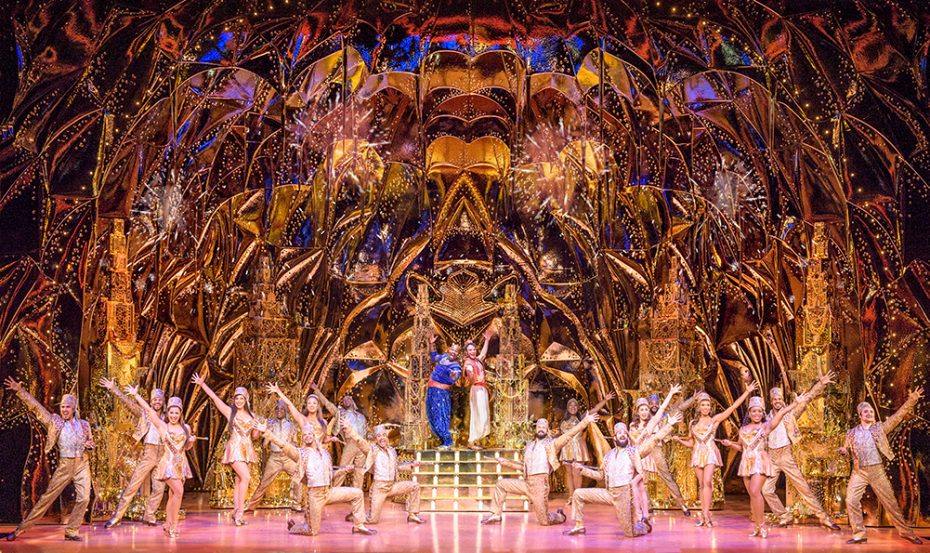 The golden, glittery cave is a stunning set in "Aladdin." (Photo by Deen van Meer)

Once Aladdin is pushed into the cave to find the lamp for Jafar near the end of Act I, the show takes off, and all the kids and gray-aired adults sit up and take notice. Scott gives the Genie his own persona, paying tribute to the late great Robin Williams but releasing a personal, amiable magic from the lamp. He tosses out one-liners like he was born to it, and proves to be pretty light on his feet in the bargain.

Once the Genie is out of the bottle, or lamp, the action races along, peppered with a full-on Busby Berkeley-style entrance for the newly conjured "Prince Ali," a few dramatic glitches in the boy-girl romance and boy-genie bromance, and culminating in a clever comeuppance for Jafar and happy ending for everyone else.

It might not be real magic, but it was certainly enchanting.

Even though it favors style over substance, the Disney movie-turned-musical achieves its goal of being tremendously entertaining. Touring production is at Shea's Buffalo Theatre, 646 Main St., through Aug. 19 with evening performances plus weekend matinees. For tickets, go to sheas.org or Ticketmaster.