On more occasions than he could possibly count, Dan Hill used to shake his head as he walked past a memorial to one of the most dramatic rescues in the history of Niagara Falls.

The big plaque, on a boulder near the Niagara Parkway on the Canadian side, explained how two workers – one named Gustave Lofberg, the other who identified himself as James Harris – were rescued after their scow went aground in 1918 in the rapids, near the brink of the Horseshoe Falls. They were saved despite the fear of many rescuers that the scow might be swept over the falls at any instant.

Instead, the scow stayed put, even to this day. Yet the one critical detail omitted on the plaque was the identity of Dan's grandfather, William "Red" Hill Sr., a Niagara River legend whose fearless efforts to untangle a rope – a task Red Sr. accomplished while dangling over the rapids – ended up being the salvation of the men.

Over the years, discouraged family members believed Hill's reputation as a river daredevil caused parks officials to balk at giving him public acclaim, out of fear that others might decide to challenge Niagara.

A ceremony Monday evening made sure no one will overlook him again.

"It's one of the great epic rescue stories, it has a happy ending, and the story lives on, because that old scow just won't let go," said Jim Hill, senior manager of heritage for the Niagara Parks Commission.

About 250 people – including many descendants of Red Sr., who died in 1942 – gathered to admire dramatic images of the rescue, images that will be part of a new and permanent display at the site that will feature Red Sr.'s name, in a significant way. Those who stayed until sunset also saw the scow illuminated by spotlight, a special feature that will continue through this weekend.

Niagara Falls historian Sherman Zavitz gave an overview of what happened – how the scow broke loose from a tugboat, how its two passengers spent a restless night fearing they would soon be carried to their deaths, how international cooperation by dozens upon dozens of rescuers was the key element in saving those lives  – before Janice Thomson delivered the evening's big surprise: 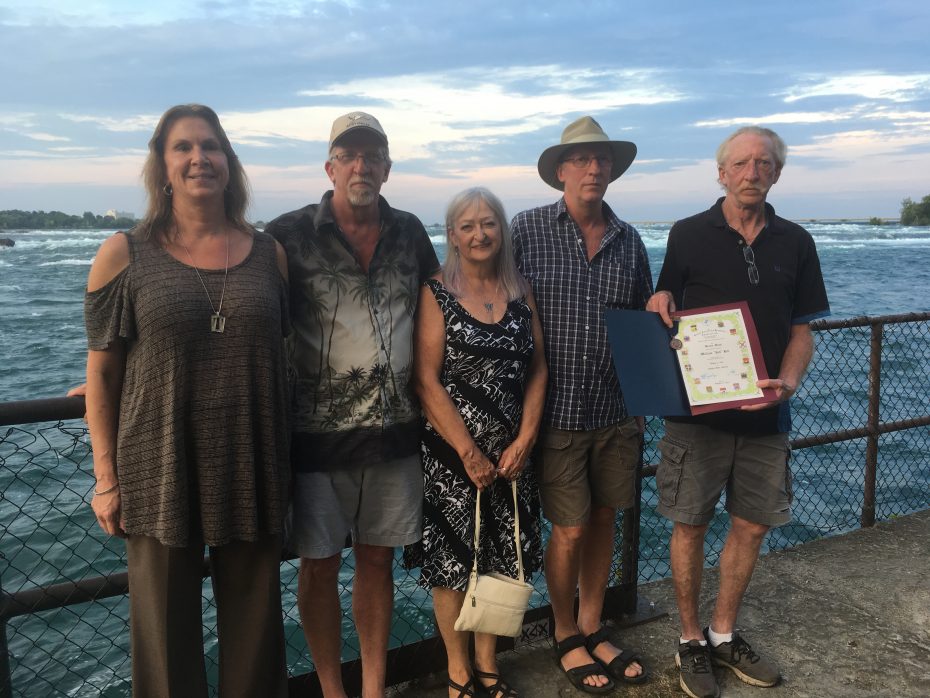 Then Thomson noted how Kip Finn, great-grandson of Red Sr., came to the parks commission and quietly explained how the family can no longer find Red's medal from the Royal Canadian Humane Association, an international  honor for extraordinary civilian bravery that Red received for his courage at the scow.

The association was willing to provide Finn with a replacement medal. It is a silver medal, said association president Rudy Berghuis, which basically equates to this level of bravery on the part of Red Hill Sr.: "The association felt that if he made even one mistake, everyone would die."

Red made no mistakes. As hundreds watched, Thomson awarded that medal Monday to a startled Dan Hill, who plans to put it in a case with the rest of his grandfather's awards.

The Hill descendants also met Kimberly Sparks, a great-great-niece of Lofberg's, who traveled from Arkansas for the ceremony. "This means everything to my family," said Sparks, who said she knows her great-great-uncle would be glad that she was there.

"It's just nice to know he isn't forgotten," said Melissa Hill-Powell Keep, one of Red Sr.'s granddaughters, who attended with her son, Sean, and grandson, Simon. The sentiment was echoed by Peter DeBernardi, who survived a trip over the falls in a barrel in 1989 and who considers Red Sr. to be one of his heroes.

The Hill family is credited with dozens of rescues at the river, and with recovering the remains of hundreds of people who died in the river. DeBernardi is still hoping a bench will be dedicated in the family's honor near the whirlpool, and he would like to see a single red maple planted in a prominent spot as a living tribute to Red Sr.

"There was no one who did what he did," DeBernardi said. "With him, it was always someone else, someone else."