Over the past two summers, Larkin Square’s weekly Food Truck Tuesday affair has gone from a deviation away from traditional dining to full-blown culinary carnival, with fleets of vehicles selling everything from kettle corn to Korean barbecue. The event has grown so gargantuan that even the most-seasoned sampler might seek shelter from the sometimes-sweltering chaos of the cavalcade.

At nearby Flying Bison Brewery, you can find overflow of Food Truck Tuesday in its parking lot, although it an oasis separate from the rolling food fare fervor. Those familiar with the earliest days of Buffalo’s craft beer curiosity understand the institution that is Tim Herzog’s Flying Bison.

Back when it officially opened in 2000, it was the first brewery to call the Queen City home since Iroquois closed in 1972. Its amber-hued Rusty Chain has been behind local pines before beer lists went from tabletop placards to the meaty literature of IPAs, lagers and lambics. Its selections have been gateway brews for a generation raised on their fathers’ anonymous pilsners. 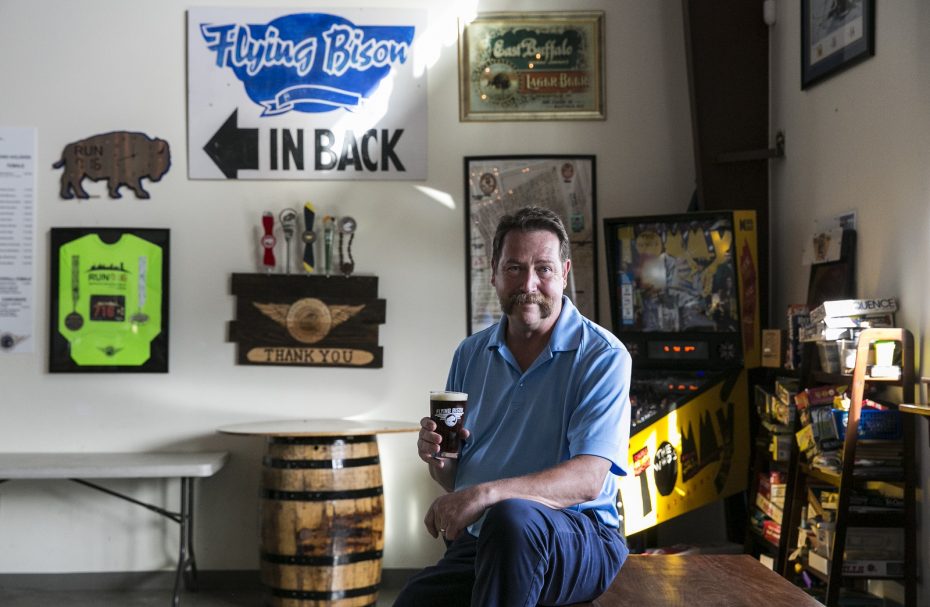 Flying Bison founder Tim Herzog sits in front of the brewery's oldest sign with a glass of Aviator Red in his hand. (Shuran Huang/Buffalo News)

But since the operation moved from its original home on Ontario Street to its current expansive home in 2014, the brewery has become as much a social destination as mere craft beer purveyor.

Whether teamed with the nearby events at Larkin Square, KeyBank Center including Bandits and Sabres games, or simply on a lazy Saturday afternoon, patrons have sought out the unpretentiousness of Flying Bison’s environment and offerings.

It’s a come-as-you-are atmosphere, with communal beer hall-style tables; a long, chest-high bar to approach for draft and cask selections; and its brewing operation, visible through glass behind the bar. All contribute to a relaxed and relatable vibe that flows through the brewery’s bartenders, patrons and, most importantly, its taps. 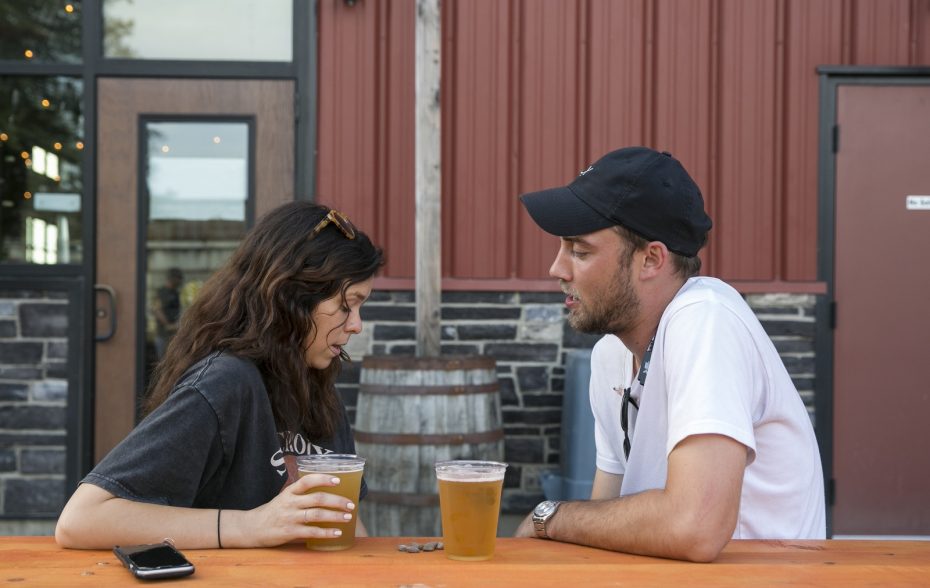 Yes, there’s the Rust Belt-appropriate Rusty Chain, the brewer’s most well-known selection. But for casual visitors looking to diversify with their summertime orders from the Dirty Bird, Cheesy Chick or Big Ed’s BBQ, $5 selections like its easy-drinking Low Gear session IPA (4.2 percent ABV) and refreshingly fruity Bisonberry Kolsch (5.6 percent ABV), or the New England IPA flair of its Juice Caboose (7.5 percent ABV) might be more appropriate for the sunshine of the season.

And while the crush of crowds could lead visitors to enjoy these selections inside Flying Bison, it’s no longer the only place on the property drinkers can imbibe. 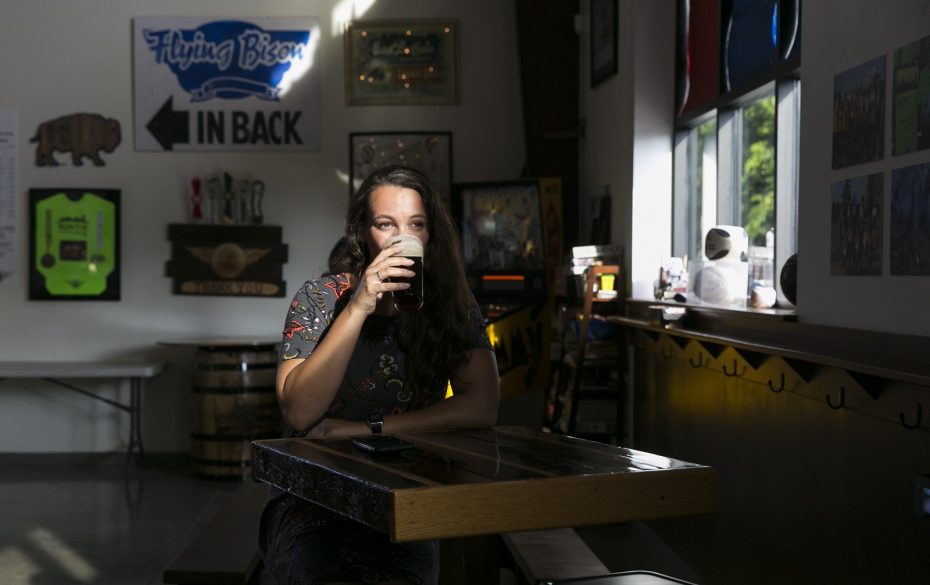 Over the past year, the brewery has added a pergola-accented front patio and a gravel-surfaced side beer garden to bring patrons outdoors. The former features more posh seating amid stained wood and cut stone, whereas the side offers picnic-table seating and lawn games, all backed by a neighboring mural that reads, “Let the good times flow.”

That message could be ascribed to the entire pulse of Larkin Square, with events that have turned a previously desolate section of the city into one of its most colorful corners.

But in Flying Bison, the food truck terrain has its ideal craft beer bastion, perched in the center of it all to complement to the offerings of the neighborhood—as well as add its brewing commitment and creativity to Larkin’s ongoing action.

Parking: Large lot in front, and surrounding side streets.

Don’t forget to: Take a turn on the Who-inspired pinball machine, next to a stack of board games for guests. 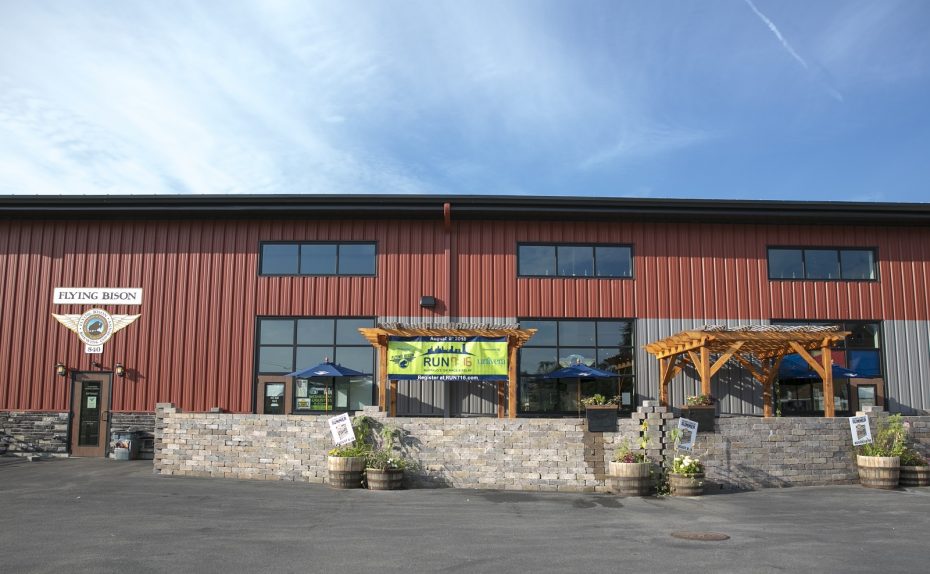 Flying Bison Brewing Company in 2000 through the efforts of founder Tim Herzog; it moved from Ontario Street to the Hydraulics District. (Shuran Huang/Buffalo News)