The Niagara River, not long past dawn on an August morning, was turned pewter by a white sun rising in a cloudy sky. Dan Hill, leaning against a railing not far from the brink of the Horseshoe Falls, talked about the river and its moods, how the mist from the falls dawdles like a languid fist in humid air, when there is little wind.

To Dan, 54, that kind of insight is second-nature, part of a passionate birthright. He was joined in Niagara Falls, Ont., by his teenage daughter Danni and a second cousin, Kip Finn, the three of them side-by-side near the old stone façade of the Toronto Generating Power Station. It was about as close as anyone can get to what is left of an 80-foot scow in the upper rapids, a wreck now reduced to one great and rusty wall.

When it was first jammed there, caught on a ledge in the river, frightened onlookers assumed the scow – along with two laborers from Buffalo, still on board – would be torn loose at any second and hurled over the falls.

As of Monday, assuming the old vessel does not finally collapse, the scow will have been there for 100 years. The two workers trapped on it in 1918, a Swedish immigrant named Gustave Lofberg and a man who identified himself as James Harris, made it to safety a day later.

"Even now," Dan said, watching as water poured through rotting holes in the scow wall, "I think they got really lucky." 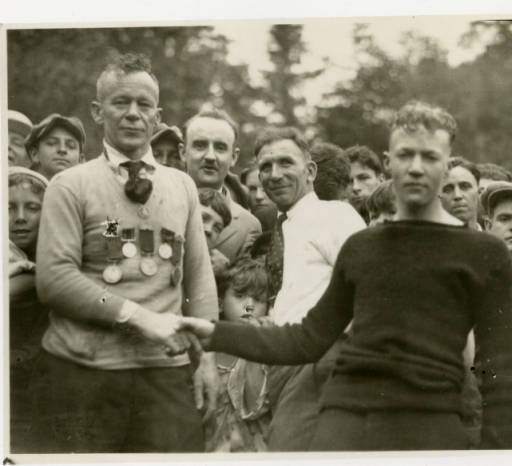 If so, that good luck went by the name of William "Red" Hill Sr.

He was Dan's grandfather, a World War I veteran who died at 54, in 1942. At 7 p.m. Monday, the Niagara Parks Commission will hold a ceremony to honor the centenary of the rescue. For a week or so, parks officials are using powerful spotlights to illuminate the scow at night, recalling the searchlights turned on the vessel for a single night 100 years ago, while the two marooned workers braced themselves for a sudden, violent death.

They were saved by fast-thinking international cooperation. From the roof of the power plant, rescuers used a U.S. Coast Guard cannon to blast a lifeline to the scow. At that time, there was no other way to reach them. The idea was to pull them back in a breeches buoy, essentially a crude seat, attached to a pulley.

The line became tangled before that attempt was launched. The only hope for saving Lofberg and Harris was to somehow unravel it by hand. Twice, Red Sr. volunteered to go out above the rapids in the breeches buoy, current sucking at his feet. If he fell, or if the river moved the scow and the line gave way, he understood that all three of them might die.

Instead, he did the job and they all lived.

Monday's ceremony will be held near the old power station, in full view of the wreck. Parks officials will pay homage to Red Sr. and all the rescuers. The gathering will have especially deep meaning for Red Sr.'s descendants, a family both lionized and scarred due to the intensity of its interaction with the river.

The parks commission is working on a new and expanded monument to replace a smaller one that recalls the rescue, an existing monument notable for its exclusion of the name of Red Hill Sr.

"It's a moment the Hills have been waiting to see happen for generations," said Michael Clarkson, a historian and author who spent countless hours with the family over many years, as he worked on his book, "The Age of Daredevils."

While Red Sr. remains a mythic figure along the river, especially in Ontario, no public memorial carries his name. The reason, really, comes down to this: Like the river that obsessed him, a living portrait of beauty and high risk, Red Sr. was a study in contradictions.

He is credited with saving 28 lives along Niagara, and with the hard and thankless task of pulling out the remains of almost 180 drowning victims. That duty included the help of several of his eight children. It was carried on by his son Wesley – who died in 2006 – and Red Sr.'s grandson Dan, 54, a longtime worker in the warehouse business who is well-versed in both the glories and treacherous hazards of Niagara.

"I think for most people," Dan said, "in the way the river moves and reacts, in the way it gives and takes, yes, it is almost like a living thing."

Certainly, that was true for the Hills. Red Sr. felt the call so powerfully that he became a notorious daredevil, a man who saved lives at the river and also risked his own in those waters, performing such acts as shooting the rapids in the gorge, in a barrel. The feat would be repeated several times, in different variations, by two of his sons, Red Jr. and Major.

Yet Red Jr. had an even larger aspiration. On Aug. 5, 1951 – 57 years ago Sunday – he attempted to become the first Hill to survive the plunge over the falls in a barrel.

"I was 10 years old," said Kip Finn, "when I learned my grandfather died going over the falls."

Many believe that tragedy was central to the reasoning of civic officials, fearful of encouraging illegal and sometimes lethal daredevil efforts, in their unspoken and long-lasting decision to keep the Hill name off public memorials. That was hard enough for surviving relatives to accept, but in a deeper and more painful way, Red Jr.'s death tore at the family itself.

His widow, Alice, blamed the obsession with the river for her husband's death, and vowed she would keep her own family away from the Hills and Niagara. For the rest of her life, she held onto that promise. Clarkson has written of how Alice returned Christmas presents sent to her home by the Hills.

While Finn said his mother, Sally, still honors his grandmother's wishes about the separation, she did not stop Finn or his brother Kelly from satisfying their own curiosity. Kelly, a U.S. Army veteran of the Iraq War, became a hunting partner of Dan Hill's.

Dan later reached out to Finn through Facebook, finally meeting him face-to-face for the first time less than a year ago. They quickly became friends, even confidants. Finn, 44, is now a candidate for mayor of Niagara Falls, Ont. On some level he finds hard to put to words, he recognized a deep and lasting connection:

Part of his heart and soul belongs to the Hills.

So Finn joined Dan and his daughter Danni last week at the river, watching as the rapids pounded at the scow. Even today, Dan said, with ready use of a helicopter, it would be no casual thing to airlift two frightened civilians off that wreck. Sherman Zavitz, the Niagara Falls city historian who will preside over Monday's ceremony, said Red Sr.'s feat takes on extraordinary magnitude, considering the limits of the equipment available in 1918.

"I don't know if anyone else could have done it," Zavitz said. 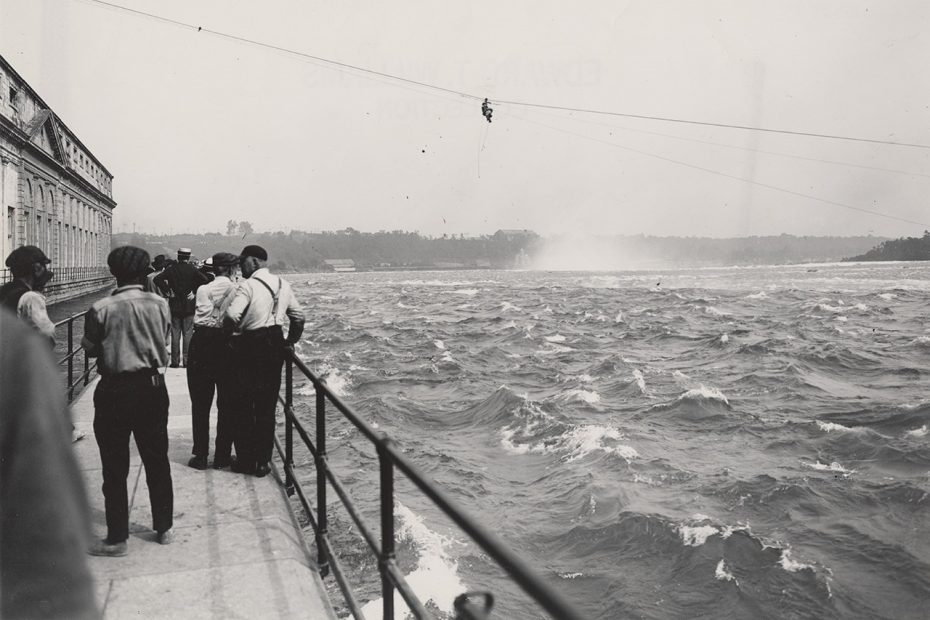 One of the two men trapped on a scow in the Niagara River is pulled to safety on Aug. 7, 1918. (Courtesy of Niagara Falls, N.Y., Public Library Local History Room)

The Niagara Falls Gazette, in its account of the rescue, described how Lofberg patiently waited on the scow for Harris to be brought to shore, then took his own long and harrowing ride to safety. The Gazette said that Red Sr., watching from the roof of the power building, reached up to grab Lofberg's feet in joyous welcome as the stranded man was pulled to safety.

Lofberg never had children. His great-great-niece, Kimberly Sparks of Arkansas, located by genealogist and researcher Megan Smolenyak, plans to be in the audience Monday. Dan Hill anticipates that many of his cousins will be be there to shake her hand at a ceremony that is not about daredevils, but about a selfless and indisputable family heritage:

Two men lived because Red Sr. was prepared to die.

"He deserves it," Dan said. "The whole family deserves it, and for more than just the scow."

As for Danni Hill, a great-granddaughter and a 17-year-old bearer of a legendary name, she remembers how her grandfather always kept Red Sr.'s medals for heroism atop an old wooden desk. In the same way as Finn, the meaning did not start to hit her until she was 10 or 11, and she began to understand the full power of the river – and just how much courage it demands to take it on.

Monday's centennial only underlines her realization.

It is "the coolest thing ever," Danni said, to grow up as a Hill.