The area north of Colvin Boulevard might be the nicest neighborhood in Niagara Falls.

Along several blocks, the sprawling ranch houses on large lots have well-kept lawns and gardens.

But between 95th and 101st streets, the streets don't run south of Colvin anymore. A tall chain-link fence blocks them off.

The fence borders one of the most notorious pieces of land in America: Love Canal.

Tuesday marks the 40th anniversary of President Jimmy Carter declaring Love Canal a federal health emergency. For the first time, a president ordered federal emergency funds to be spent on a man-made – not natural – disaster. His order came five days after the state Health Department issued its own health emergency declaration, which followed two years of investigation.

"Love Canal wasn't the worst site in the country. It was made the most famous," said Lois Gibbs, the former Love Canal resident who became a world-famous environmental crusader.

In the Love Canal Containment Area, 40 acres of well-manicured grassland now conceal 21,800 tons of some of the deadliest toxins ever created by the chemical industry: dioxin, lindane, benzene hexachloride, chlorobenzene and dozens more compounds.

The chemical stew, 25 feet deep at spots, is buried beneath a plastic liner and 18 inches of soil.

To this day, 5 million gallons of leachate a year drips into the trench around the waste pit, tracked by 150 monitoring wells, according to the state Department of Environmental Conservation. It is pre-treated on-site and then pumped into the city sewers.

Black Creek Village, as the area north of Colvin Boulevard was dubbed, is now populated by people who, except for a few old-timers, have moved in since the neighborhood was reopened in 1990.

Many live in houses left abandoned by their former owners nearly 40 years ago. They were renovated at government expense.

"There was pollution, but they contained it, and there's no problem with living in this area," said Michael Oliveira of 93rd Street. "Here's a house, I can buy it at a deep discount and the ground, water, air, it's all safe." 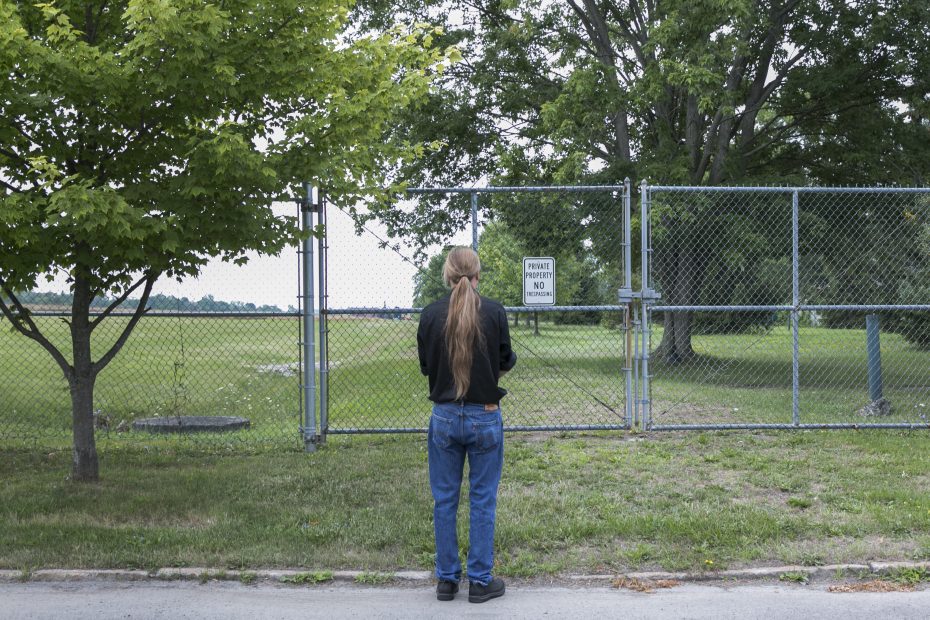 Robert Neubauer, 52, a lineman for Spectrum who grew up in the Love Canal neighborhood, gazes at the fence that encloses the 40-acre containment area. (Shuran Huang/Buffalo News)

"I'm going to tell you what I tell all the people: We know what's in our backyard. What's in your backyard?" said Paul Henry, who has lived on 98th Street since 1996.

In 1999, Gibbs made a prediction in a Buffalo News interview.

"Something potentially deadly will leak out of the ground, not tomorrow but in the next 20 years, and there'll be no one there to help the people," she said.

Gibbs said last week that a new round of litigation may prove her right.

"What we've seen is that Love Canal still is a problem," she said. "It's a problem in the northern end that they resettled. People there are complaining about being sick. They're finding contaminants there.

"It was pretty predictable, and the reason is that they didn't ever clean up outside the containment system," she said. "They did the sewer lines and backfilled them with stone, and they did a little bit in the creek, but the actual soil that was contaminated from chemicals leaking from Love Canal over the many decades still remained."

The DEC and the U.S. Environmental Protection Agency both said last week they see no evidence that waste is leaving the site.

Some don't believe them.

In 18 lawsuits filed from 2014 through this spring, nearly 1,000 current and former Love Canal area residents sued Occidental Petroleum Corp., the City of Niagara Falls and every contractor involved in the cleanup and maintenance of the city sewer system.

The lawsuits, claiming health problems both old and recent, grew out of a Jan. 11, 2011, incident in which dioxin and other toxic waste was found in a sewer line on Colvin Boulevard between 96th and 97th streets.

The papers assert that the containment area is leaking.

"The health and safety of the surrounding community and neighborhood is our Number One priority," said a spokesman for Glenn Springs Holdings, a cleanup company affiliated with Occidental Petroleum. "We believe the plaintiffs' allegations are meritless and we will continue to vigorously defend the cases."

The DEC said last week the Colvin waste was missed in the 1980s cleanout of the sewer system. It was isolated in a pipe that ran below the general level of the sewer main. That pipe was replaced and monitoring wells installed around the site have shown no chemical movement underground, the DEC said.

Gibbs' predictions of more Love Canal trouble ahead make her unpopular in her old neighborhood.

"Everybody knows about Love Canal. Let it die," Henry said. "We choose to live here. If there's a problem, we'll take care of it. Just leave it alone. Stop bringing it up year after year."

"I didn't care for the way she conducted herself. She was Mrs. High-and-Mighty then," said Robert Roulley of 93rd Street.

Donna Baptiste of 98th Street lived on 101st Street in the 1970s and knew Gibbs. The Baptistes were the third family to move back into Black Creek Village, in 1991.

Asked what she would say to Gibbs if they met today, Baptiste said she would ask, "Are you happy? I mean, if you don't like where you live, go away."

"I am happy," said Gibbs, who now lives in Virginia. She said she's especially happy that the health problems her children had, include her son's epilepsy and her daughter's rare blood disease, cleared up within two years of leaving Love Canal.

"If you made the decision to stay there, to live your life there, to raise your kids there, you don't want to have to second-guess that decision every day," Dyster said. "That would make it psychologically very difficult to enjoy your home. I try to be respectful of that. I've said this many times: I would have no fear of living in that neighborhood as long as the monitoring system is kept up."

The history of Love Canal

Love Canal was begun in 1894 – but never completed – as an all-U.S. route past Niagara Falls.

Businessman William Love, unable to finance his project, left behind a 16-acre rectangular site hacked out of the thick clay soil in the neighborhood.

The unfinished canal was about 3,000 feet long from Frontier Avenue to Colvin Boulevard. It was 8 to 16 feet deep and 60 to 80 feet wide, and surrounded by mounds of excavated clay.

[RELATED: A chronology of the site's history and the unfolding environmental disaster]

In 1942, the fast-growing Hooker Chemical Co. obtained permission from the Niagara Power Development Corp., which owned the site, to begin dumping at Love Canal. Hooker took over the property in 1947. Dumping continued until 1952.

That language didn't prevent Hooker's corporate successor, Occidental Petroleum Corp., from having to pay the federal government $129 million in reimbursements for the costs of sealing off the chemicals, evacuating the neighborhood, demolishing hundreds of homes and relocating about 7,000 people.

From idyllic to toxic

"It was an idyllic neighborhood," Gibbs said of Love Canal. 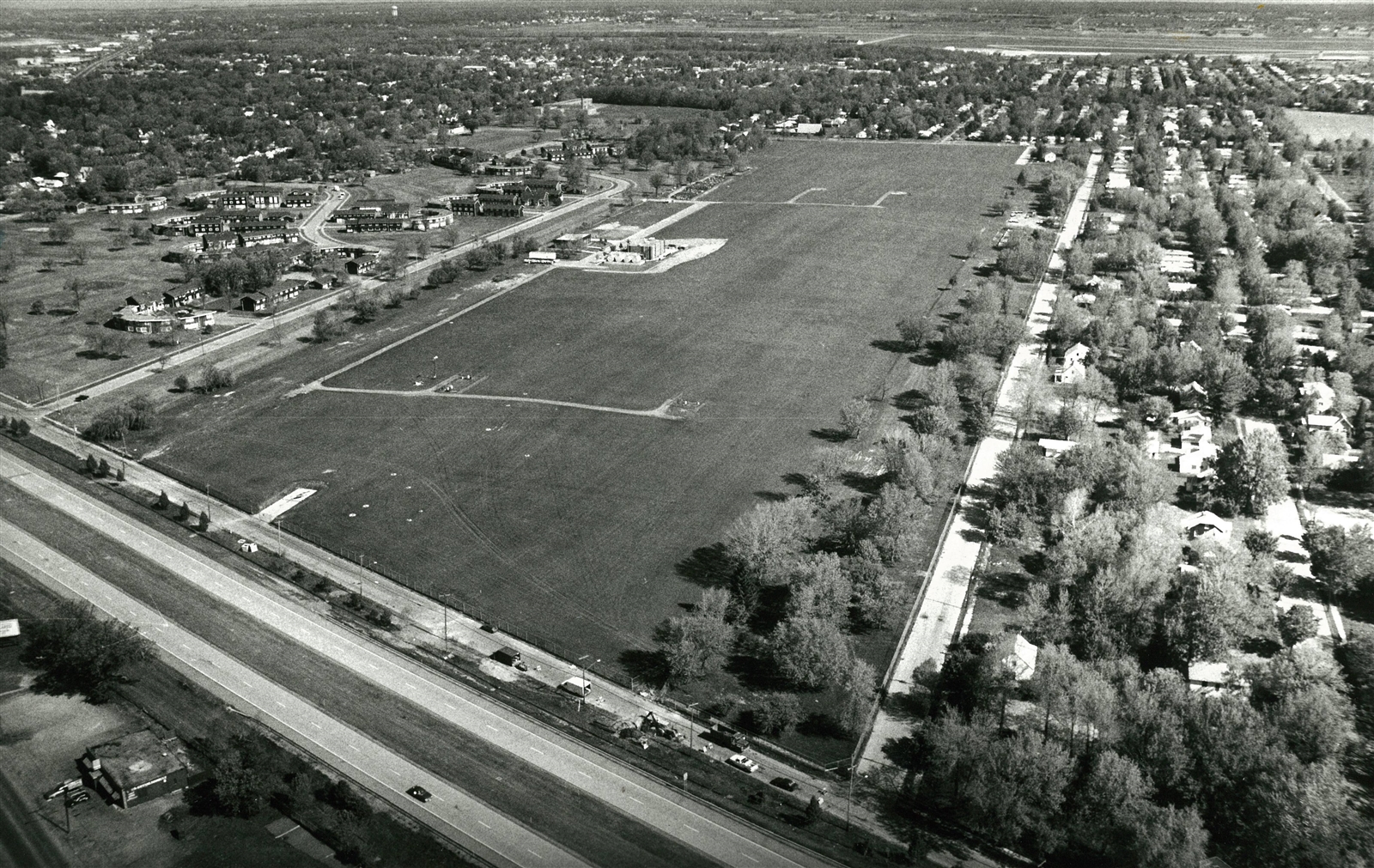 A 1987 aerial view of Love Canal shows the task the U.S. Environmental Protection Agency had set out for itself for a dioxin cleanup that would cost between $26 and $31 million. Click on the image to view more from The News' archives. (News file photo)

But there had been occasional encounters with toxic waste over the years, court records showed, such as children being burned while playing in dirt and even some exploding drums of waste.

Although Niagara County Health Department testing showed toxic chemicals in some Love Canal basements in 1976, the situation really came to a head after the Blizzard of '77.

The melting snow caused the water table to rise in and under the shallow old canal, pushing toxic chemicals to the surface. During 1977, tests in backyards and sump pumps would show the presence of cancer-causing dioxin and a wide variety of other chemicals throughout the neighborhood. Drums of waste also began surfacing.

"The alternative was to either evacuate or clean up the site. Back in 1978, no one knew how to clean up the site," Gibbs said. "To clean up Love Canal would have been prohibitively expensive. I mean, to do it right, which means digging that stuff out."

In 1994, Judge Curtin blamed Hooker for not warning parents of the dangers to their children, but he also said that in 1968, the state Department of Transportation did just as badly in exposing toxic wastes while constructing the LaSalle Expressway.

The wastes were hauled to the Niagara Sanitation landfill in Wheatfield, where today, nearby residents are pursuing lawsuits over health problems allegedly caused by these Love Canal exports, which weren't removed until 2015.

"Niagara and Erie County has a lot more Love Canals," Gibbs asserted. "I think people should have an open mind when people are complaining. It's not just hysteria. Often it is real problems."