Only four teams remain in contention in the Buffalo & District Soccer League's premier division playoffs, and just two of them were projected to make it this far.

Sunday's semifinal match-ups for the league's top tier are staggered so you can watch both live, if you're that devoted to men's amateur soccer in Buffalo. Here's the rundown for each game.

Raiders primer: BSC Raiders might be invincible. Rocky Palmeiro's side went undefeated in the regular season, just claimed the Tehel Cup title and seems primed to win its third league title in the last four seasons. Facebook discussion among Raiders past and present begged the question whether this BSC team is the best ever; there's a case to be made.

The rich often seem to get richer in the BDSL, and adding youngsters Colin O'Keefe and Brett Stern to the puzzle, as well as handing a bigger role to Canisius College's Evan Walsh, has made a superb foundation just a hair quicker and more dynamic, two traits that tend to diminish as a team ages collectively.

BSC's defense is freakish, too. FC Buffalo assistant coach Casey Derkacz might be the best player in the entire league, and Anthony Johnson's rather selfless switch to fullback has allowed Raiders to regularly overrun opponents on his side of the pitch.

Kyle Rogers is a sleeper candidate for premier division Best XI year after year, while Alex Osuch matches the rest of the trio's physicality and adds a bit more of an edge.

Fifteen of Raiders' 22 players have appeared on FC Buffalo's roster at one point or another, and two more - Rudy Pikuzinski III and Matt Waddington - played several years for Niagara United, a professional club in Canada. The experience, talent and continuity of the group borders on unfair.

Wolfpack primer: Is Wolfpack the 2018 team of destiny, the squad with the tenacity and desire to grind out wins and overachieve? It's possible. We feel rather embarrassed for picking them to finish in last place.

The newly promoted squad, managed by Chris Moonan and Andy Renkas, already knocked out BUSS in overtime last weekend, and the 'Pack enters Sunday night's game without the burden of expectations.

Leading the charge all season, goalkeeper Renkas stood on his head (not literally) last Sunday to send BUSS packing, and that's been a common theme much of the season. He's probably the division's best pure shot-stopper, and teammates feed off his energy.

Struggling with attendance for much of the early-to-mid portion of the season, Wolfpack called in reinforcements in Pete Kempf, Callum Christie and Kyle O'Brien to assuage the problem. As summer moves forward, attendance is often half the battle - or more.

The defense in front of Renkas doesn't mess around, either, as Brian Terpin, Moonan, Jason Curry, Zack Griffey and Brandon Simoncelli are very much a cohesive unit and if Anthony Appiani is there to shield them, scoring will not be an easy venture for Raiders.

Offensive production has been scarce for Wolfpack, which finished tied for second-last in regular-season goals, but fleet-footed winger Cal Richards, direct midfielder Scott Berardi and former Raider Ricky Fleck are the primary threats.

No. 10-type Jose Rodriguez was a nice offseason find for a team desperate for a creative spark, while former Bantu forward Steve Acheampong came through with a goal and an assist in a playoff-sealing win. 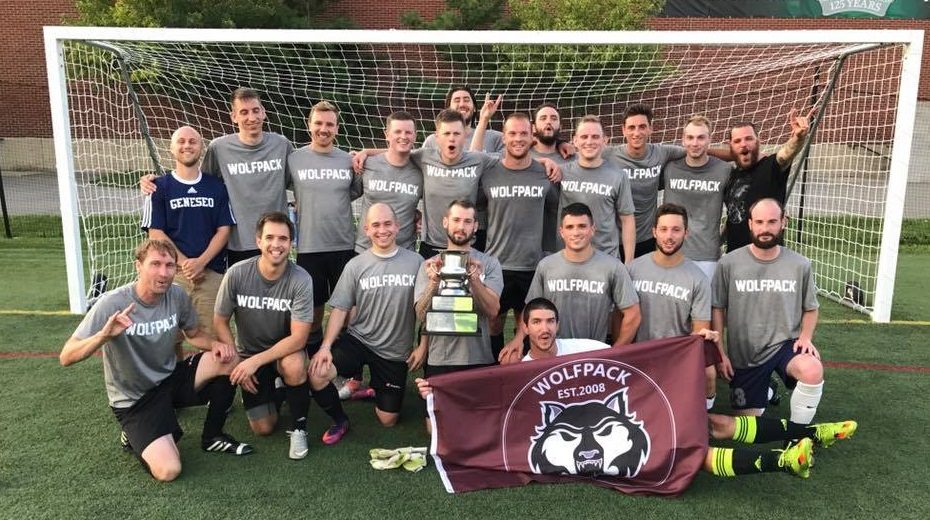 Credit Wolfpack for their unexpected run to the semifinals, but it ends with a whimper here. 3-1, Raiders.

Sharpshooters primer: The semifinals were the stage in which Sharpshooters were eliminated last season, despite earning a first-round bye like they have in 2018. Amherst was predictably very good in the regular season; Trevor and Brendan Lawler's side was the only one to keep Raiders out of the win column, and their youth movement paid off handsomely.

Their depth will be tested Sunday, however, as Drew Braun, Ricky Martinez and Jon Cary are expected to miss out, leaving a gaping hole in the heart of the back four. Center back Graham Harris, injured for the first portion of the season, has returned to form, however, and Andrew Crawford is perfectly comfortable sliding back from his holding mid role.

Canisius College's Melvin Blair and Bjarki Benediktsson were terrific adds, even if neither has collected a point so far this season. The chief purpose of their signings was for a playoff boost, however, and Blair, especially, should wreak havoc on Lackawanna FCY.

A sizzling late-season scoring run from forward Justin Hofschneider (eight goals) has put foes on notice, but Brendan Lawler, Zack Schmidt and Brandon Loncar have all scored four goals or more this campaign.

Their names might not pop up on the score sheet too often, but former Kenmore East Bulldog Cody Rouse and soon-to-be Williamsville East senior Ishaan Kashyap are invaluable to the Amherst midfield for their work rates and strengths in keeping the ball.

Perhaps Sunday's x-factor will be goalkeeper James Quinn, who will likely be busy. 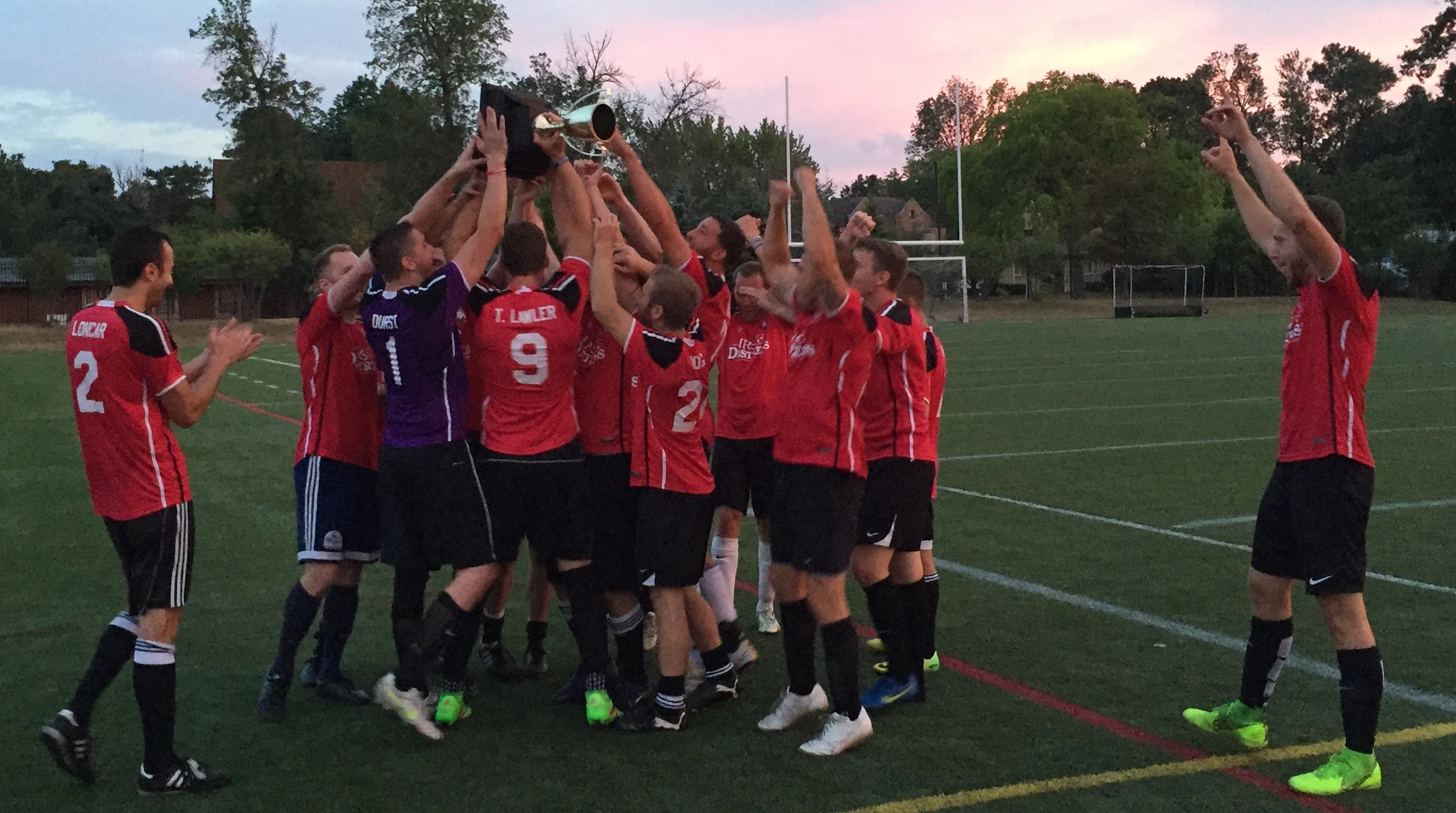 Lackawanna FCY primer: Let's get this out of the way first: Lackawanna forward Ali Shawish has put together an all-time great BDSL season, sniping 22 goals and tacking on six assists. No one has come close to those numbers in any division. The former Lackawanna Steelers star is blessed with the speed to break down defenses himself, and his finishing ability continues to progress.

FCY is not all about Shawish, though, as a few of manager Faress Saleh's additions have been shrewd, namely Buffalo State College goalkeeper Andy Queen and midfielder August Finn, who just wrapped up his second season with the NPSL's Rochester Lancers.

Nageeb Ali's return has helped significantly in the goal-scoring department; both Yemen Elite and FC Yemen, the two sides that merged after last summer to form this team, were short a capable second forward in 2017.

Swiss Army knife James Kpainay, adept both in the attack or as a center back, is a key piece, along with blossoming Buffalo State defender Saleman Salim. It was Salim, though, who was red carded in the first meeting between these two teams, which ended in an 8-2 Amherst win.

You can't talk about Lackawanna FCY without mentioning center midfielder Mateo Escobar, the side's on-field coach and field general. Abdulqawi Mohamed and Ali Mohamed are two other midfielders to keep an eye on, while Layth Alaekada can score stunners. 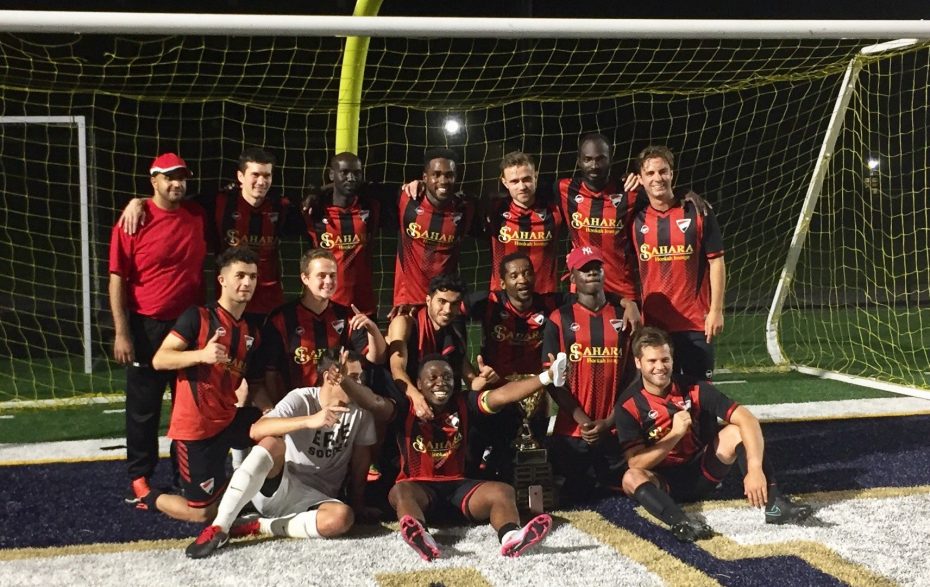 Yemen Elite, the 2017 Tehel Cup champions, have rebranded as Lackawanna FCY in a merger with FC Yemen this year. (Ben Tsujimoto/News file photo)

This is the best match-up of the weekend. Lackawanna FCY advances after two overtimes, 3-2.

*Related: Look back at our preseason predictions, which were - as you might guess - hit and miss.