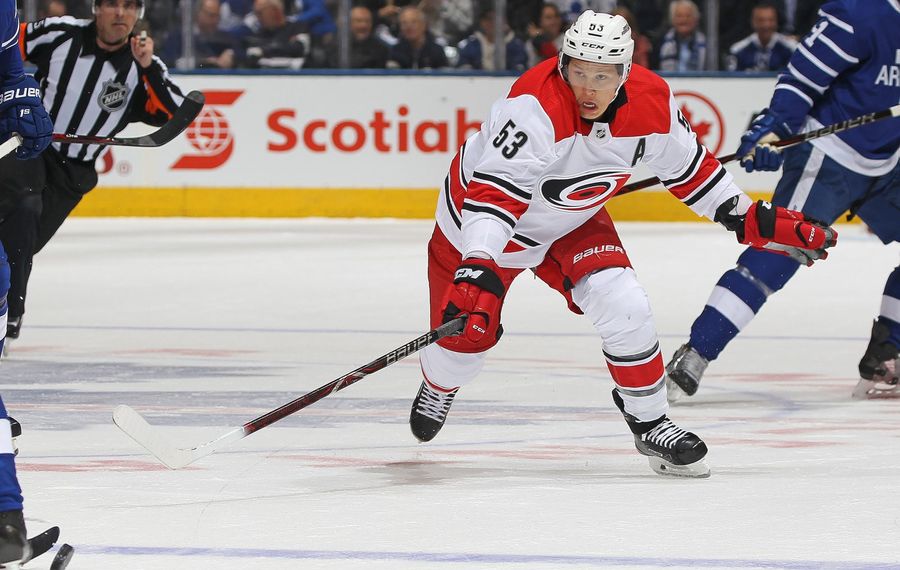 Jeff Skinner had the final say on if and where he'd get moved by the Carolina Hurricanes. With a full no-trade clause, the 26-year-old winger could veto any trade General Manager Don Waddell attempted.

On Thursday, he elected to accept a move to the Buffalo Sabres, a team that finished in last place in 2017-18. Why?

Skinner, who spoke to the Buffalo media on a conference call Friday, said he started his assessment by looking at the young core. Names like Jack Eichel, Rasmus Dahlin, Casey Mittelstadt, Sam Reinhart and Rasmus Ristolainen made him look past the team's previous record.

"The young group of players they have, the young core is exciting," Skinner said. "I'm excited to join those guys and be a piece of the puzzle. ... You sort of name their seven, eight youngest players, Jack Eichel is probably top of the list. Rasmus Dahlin, I haven’t seen him play but I’ve heard a lot about it. I’ve read a bunch of stories on everything he’s been on this summer."

Skinner, who is 26 but already an eight-year veteran, heaped praise on Eichel, whom he doesn't know personally but has heard plenty about from Eichel's good friend, Carolina defenseman Noah Hanifin. While a pairing of the two players isn't a lock, the newest Sabre is penciled in on Eichel's left wing in most line projections. If that ends up being coach Phil Housley's move, Skinner will get a big upgrade. His most frequent centers the past two seasons have been Derek Ryan and Victor Rask, yet he's still put up 61 goals in that span.

"He's obviously one of the top centermen in the game right now," Skinner said of the 21-year-old Eichel. "I'm so happy to be on his team instead of against him."

Pleased with the roster, Skinner asked around the league to find out what playing for the Sabres is like.

It didn't take long for him to come to a conclusion. He said he was informed of the proposed deal on a phone call early Thursday morning. The deal was official before 7 p.m.

The Sabres acquired Skinner in exchange for Cliff Pu, a 2019 second-round pick and third- and sixth-round picks in 2020.

Skinner is familiar with the rut the Sabres have been in for the past seven years. He's coming from a Carolina franchise in an even longer playoff drought — nine years. Frustration began to fester in the organization. Skinner's name was frequently brought up in trade rumors from the start of the offseason.

After months of uncertainty, the deed is done. Skinner applauded his agents and the Hurricanes for working through the hangups and said he's ready to focus on his new home.

"It’s going to be a fresh start," Skinner said. "It’s going to be my first time going to a new organization and meeting all the new staff and a bunch of new teammates. It’s certainly something I’m looking forward to.”

He said he hopes it's a fresh start for the Sabres as a whole, too. General Manager Jason Botterill has now added seven players with a serious shot at making the team this offseason.

The GM has done his part without sacrificing the team's four first-round picks over the next two years.

“What gets me excited as a general manager is we’re at least giving our coach options to put out lines that are going to hopefully contribute offensively,” Botterill said during a conference call Thursday.

Skinner, a three-time 30-goal scorer, figures to boost an anemic Sabres offense that finished last in the NHL in goals -- they were the only team not to break 200 -- and particularly struggled in one-goal games. The Sabres' winning percentage was .324 in those situations; only Detroit (.270) was worse.

“The NHL now is so tight," Skinner said. "I think there’s so much parity. So many games are decided by one goal.

"It’s exciting because you can start off the season 0-0 like we are now and we all get a fresh start. Hopefully, we get off to a good start and go from there.”

The clock started on contract talks the second the deal became official, as Skinner is signed through the end of the upcoming season at $5.735 million before potentially becoming an unrestricted free agent. He said he isn't in a rush to start negotiations, instead focusing on preparation for the season.

"I haven't really thought about it," Skinner said. "The past 24 to 48 hours have been pretty busy. ... Honestly, I'm just excited to start the season. That's where my focus is and where it's going to be for the next little while."

Veilleaux, 25, split last year between the AHL's Laval Rocket and ECHL's Brampton Beast. He had three goals and seven points in 52 games with the Rocket, the AHL affiliate of the Montreal Canadiens. The former fourth-round pick of the St. Louis Blues has recorded 63 points and 304 penalty minutes in 253 career AHL games.