Earlier this summer, on a quiet Sunday, Zachary Canne exchanged a couple of quick Snapchat messages with his friend and relative, Nicholas Clark of the New York State Police.

Canne, 26, was on vacation with his family at Keuka Lake. He sent Clark a snap of the water churning in the wind, a powerful shot of a place where they daydreamed about fishing together. Clark responded with an image of the upstate golf course he was playing at that moment.

Basically, both images meant: Wish you were here.

Within hours, after the seemingly unthinkable occurred, Canne regretted he had not said a lot more.

Canne was still at the lake when he learned Clark, 29, had died while on duty in Steuben County, less than a day after the two men corresponded. Clark answered a call at the home of Steven Kiley, a school principal who had threatened suicide and barricaded himself in his home. Investigators say Kiley shot Clark, then took his own life.

That numbing loss was followed by many eulogies about Clark's prowess as an athlete. He was remembered as a football linebacker skilled enough to get a look from his beloved Buffalo Bills, as a two-time football All-America at Alfred University who was also a state wrestling champion at Canisteo-Greenwood High School.

Athletics is certainly what Canne knew above all else about Clark, his distant cousin, before they became close friends. Born three years apart, they both grew up in Canisteo. As a child, Canne watched Clark bring utter passion and commitment to the sports he loved.

At that time, Canne was uncertain about his own future. In 2012, after studying for two years at the University at Buffalo, he decided to enroll at Alfred and take a shot at making the football team. For Canne, that was a significant goal. He has described his own high school football career as "wildly mediocre."

Canne, who said he was seeking a sense of purpose in his life, knew that Clark often trained at an Oklahoma ranch. It was owned by the brother of Alfred assistant coach Jamie Freeland. Canne asked Freeland if he could give the ranch a try. He would pay for his stay there by helping with the chores. Canne hoped to find a mission in the solitude.

A week after arriving, he found out he would not be there alone.

Clark, a 2012 Alfred graduate, decided to join him. Clark's mother, Theresa Gunn, said her son had been a Bills fan since early childhood. Clark learned he had a chance to try out at a Bills minicamp for undrafted free agents. He understood the against-the-odds magnitude of the opportunity, and he wanted a stark and lonesome place to lose himself in training.

It would be just Clark and Canne — along with Freeland's brother Brian and his family — together on hot days, in the middle of the prairie.

"I was kind of nervous when he came out," Canne said. They did not know each other well. From a distance, Canne pictured Clark as a guy with limitless self-assurance, built upon extraordinary strength and speed. Canne feared Clark might see his presence as a hindrance, "that I was on this random goal while he was in pursuit of something so few people have a chance to do."

It turned out to be the exact opposite.

"He was incredibly driven," Canne said. "I didn’t know who I wanted to be or what I wanted to do. He gave me an incredible amount of confidence but also a sense of direction I desperately needed." 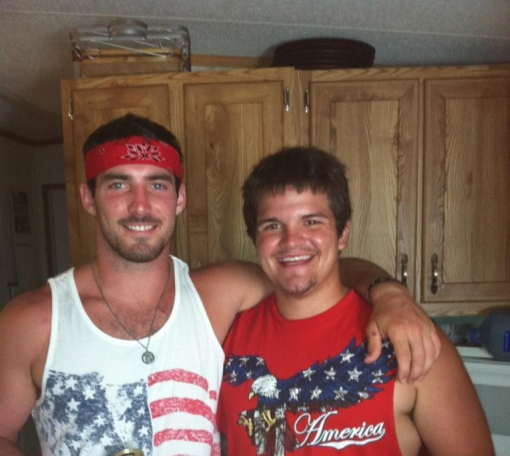 Nicholas Clark and Zachary Canne pose for a photo while training at an Oklahoma ranch. (Provided by Shealyn McKee)

After Clark died, Canne processed his grief for a couple of days, then tried to capture the friendship in an entry he wrote for his blog, a piece that earned the gratitude of Clark's mother. Canne built the essay around the difficult training he and Clark did in the driveway at the ranch, using 36-inch plyometric boxes as hurdles.

The whole point was building explosiveness, which Clark saw as the key to having a shot in the NFL. The two men ran sprints, often uphill. They lifted endless weights. And they spent hours with the boxes, which Clark could easily clear with a fierce jump.

As for Canne, day after day, he would bang into those 3-foot obstacles, fall down and then try them again. He braced himself for Clark to respond with frustration. This was a guy, after all, dreaming NFL dreams.

Instead, what Canne received was a hand up.

For seven weeks, they were always together. Sometimes they would share a sandwich or a beer as they sat by a fire and talked into the night.

One particular moment stays with Canne. They went golfing, a game that is not easy for him. Clark had started playing a few years earlier, Canne said, "and already was a phenomenal golfer." Canne launched a shot that went wildly astray. Embarrassed, he watched the ball plummet to earth and then stood there, frozen.

Clark told him, "It's not going to get any better the longer you stare at it."

That was it, everything about Clark in one sentence. His words were not harsh but matter-of-act. He believed in moving forward, Canne said, the idea that you shake off mistakes, that you pick a goal and absolutely give yourself to it.

He did that with sports or with any job he ever held. Canne knows Clark brought that philosophy to the tryout with the Bills, and he knows Clark was profoundly disappointed when the team did not invite him to training camp.

Yet he understood that no one can accomplish every goal in life, and he carried that passion into his work as a state trooper.

"He was always bouncing back," Clark's mother said. "He never stayed down for long."

Canne, for his part, went out for football six years ago at Alfred, then broke his foot before the summer was over. Taking a lesson from Clark, he thought hard about what should come next. He earned his degree in business administration and marketing, and he eventually was hired as food services manager at the Greater Southern Tier BOCES.

It is a big deal for Canne, a job in his field with a pension and benefits.

When he texted his friend to let him know, Clark was thrilled.

They still saw each other, but work and life made those chances come less often. There was fishing they absolutely intended to do, and many rounds of golf they wanted to play, promises reinforced by those snaps exchanged on what seemed to be a typical Sunday.

Hours later, Canne could not believe that Clark was gone. He felt a need to publicly express one truth.

"I'm a significantly better person because of Nick," Canne said.