The revitalization of Buffalo was on full display last weekend during National Dance Day.

Cynthia Cadwell Pegado — a dance instructor who specializes in working with those who have Parkinson's disease — led a joyous group in marking the celebration on the boardwalk at Canalside.

Several of her students with Parkinson's were there. So were Buffalo Public School students with special needs. Teens with Aspire Center for Learning tapped their fingers and toes from their wheelchairs to the beat of the Kylie Minogue's "Dancing."

Tourists and locals joined in the fun, helping to underline that the City of Good Neighbors has a right to talk proud on these glorious days of summer.

"I so loved the spirit that everyone embodied. We were celebrating ourselves, all together, as a community," said Pegado, who danced professionally in her late teens and 20s. She became certified to teach the PDdance program the year after her father, Frederic Cadwell, was diagnosed with Parkinson's in 2010.

The neurological disease impacts a part of the mid-brain that controls movement. It tends to progress slowly. Symptoms can include tremors (mostly in the hands), limb rigidity and gait and balance challenges, as well as depression and trouble speaking and sleeping. The severity varies from person to person.

Dance helps relieve and keep those symptoms at bay.

Pegado — who teaches several Parkinson's-related dance classes each week at other sites — has affirmed on Friday mornings at Canalside that it also soothes and strengthens those with all sorts of challenges, no matter how big or small.

"Cognitive and physical challenges of dance that benefit people with Parkinson's are of great value for people who need to keep active, who've never danced before, who used to dance," she said.

Dancers this summer have included tourists from around the world, pre-school students and several attendees in town two weeks ago to attend a conference at the Buffalo Naval Park. Kids from St. Mary's School for the Deaf attended recently — and signed "Let's Go Buffalo" as they participated.

Mary Rowe was among those with Aspire, which brought a contingent of those aged 15 to 21 to Canalside last weekend. The agency assists those with physical and intellectual challenges. Field trips are common on summer Fridays, "so everyone can enjoy themselves," Rowe said. "The kids have likes and dislikes, just like everybody else, and they like music and dancing."

As a child, Pegado trained under Norma Ferrara Gelose and participated in the Young Dancers’ Workshop. By age 16, she was principal dancer with Ken-Ton Ballet. She was the lead in “Giselle” and other productions during her last two years of local training before heading to college as a dance major.

She stopped dancing after she married, to raise a family, but reimmersed herself after her father fell ill and she had a chance meeting in New York City with a friend and former colleague who had danced with the National Ballet of Portugal. The friend told her about a Dance for PD program started a decade earlier by the Mark Morris Dance Group and the Brooklyn Parkinson Group. Intrigued, Pegado enlisted in the program's PDdance training and became certified to teach it.

"My whole goal is to offer movement that is satisfying to each individual, and to accept whatever movement someone can manifest," she said. "My mantra is, 'There's no wrong way to do it.' "

She calls the Canalside classes, in their fourth summer, "Everyone Can Dance." 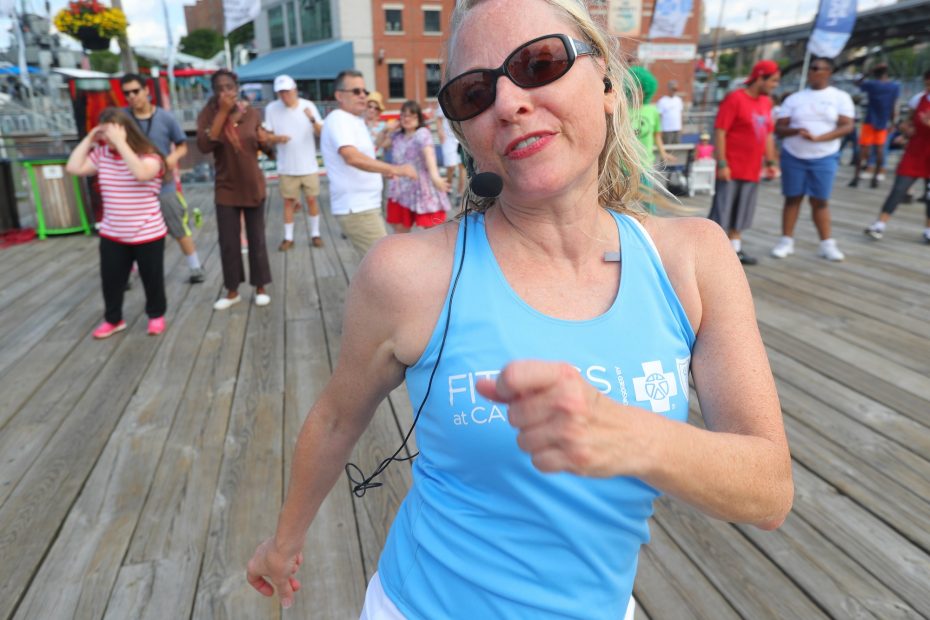 There is no cure for Parkinson's. The disease is not fatal but the Centers for Disease Control and Prevention lists its complications as the 14th leading cause of death in the United States. An estimated 1 million Americans have Parkinson's out of 10 million cases worldwide.

Treatment options include medications and surgery — and movement.

"Research has shown that movement in general is so critical in the battle against the symptoms," said Chris Jamele, executive director of the Parkinson's Foundation of Western New York, which helps underwrite the cost of Pegado's classes, along with BlueCross BlueShield of Western New York. "It's a movement disorder and the more that people move, the more they can delay the onset of some of those symptoms, so it's really critical."

"(Cynthia) can read the people with Parkinson's to see what their limitations are, and be able to work with those," Jamele said. "She has opened a number of doors and minds for people in the Parkinson's community, people who never gave a thought to even consider dance in any form, let along choreographed movement to music to help with their symptoms."

From now through November, she also is teaching an Art Moves Me class most Wednesday mornings in the Burchfield-Penney Art Center. A violinist or other musician always accompanies her.

Jim Eagan and Paul Sauer are among her dance regulars. 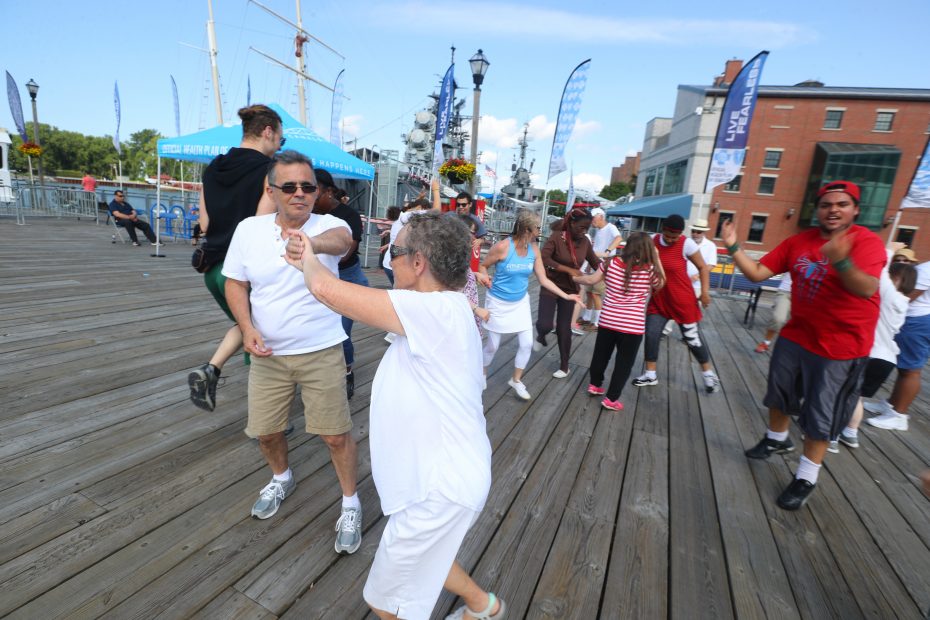 Jim Eagan and Elaine Geschwender, of West Seneca, enjoy the "Everyone Can Dance" classes at Canalside. Eagan said he has come to value exercise even more since he was diagnosed nearly a dozen years ago with Parkinson's disease. (John Hickey/Buffalo News)

Eagan, 66, of West Seneca, is a retired Buffalo Sewer Authority engineer, who worked for six years after he was diagnosed with Parkinson's 11 years ago.

"I started riding a bike as soon as I found out," said Egan, who also takes boxing classes and regularly attends speech therapy sessions at the University at Buffalo with Sauer and others, to help address the softened speech that the disease also often brings.

"It's enjoyable to dance," he said. "The classes are amazing. Cynthia gets everyone involved and makes it fun."

Sauer, 73, of Getzville, is a marketing professor at Canisius College who continues to work part-time. He regularly rides a Theracycle and has skied several times as part of the Parkinson's Powder Busters program in Ellicottville. But he counts dance among his healthiest choices.

"Cynthia will show you so many things you never even thought about," Sauer said. "It's so much discipline in terms of posture and movement. These are critical for those with Parkinson's because you need the physical and mental stimulation. You can speed up the movement as you learn it, which helps your reactions."

His advice to those recently diagnosed? Consider the depression that can come with a diagnosis. Join a support group, attend the PDdance classes and "do whatever you can find that will work for you."

The PDdance classes tend to be a bit more regimented, built on hand, foot, leg and other and other movements that help improve function.

"It's more like freestyle" at Canalside, Egan said, though hearing and remembering a sequence of moves is also part of the process. "Canalside is even better, the atmosphere down here, the water, and we get to dance with other people."

If he can't keep up?

"There are no wrong moves," he said.

Pegado draws from various styles of dance, including folk, tap, ballet, contemporary, modern, Hula and Flamenco. "Anything that has something tricky pattern-wise and weight shift-wise and coordination-wise is helpful," she said. "Then we break it down really slowly, feet only, hands only, focus only, and slowly build it together with their capabilities. The whole idea is for them to feel good about moving their bodies."

Dance classes at the art gallery and Canalside — both open to the public — tend to be more free-flowing.

"I love that we've carved out a niche at Canalside where people with Parkinson's can come and be a part of the downtown renaissance," Pegado said. "It started with my desire to teach in the outdoors because Parkinson's shrinks someone's world and in this space, a piece of something beautiful happened." 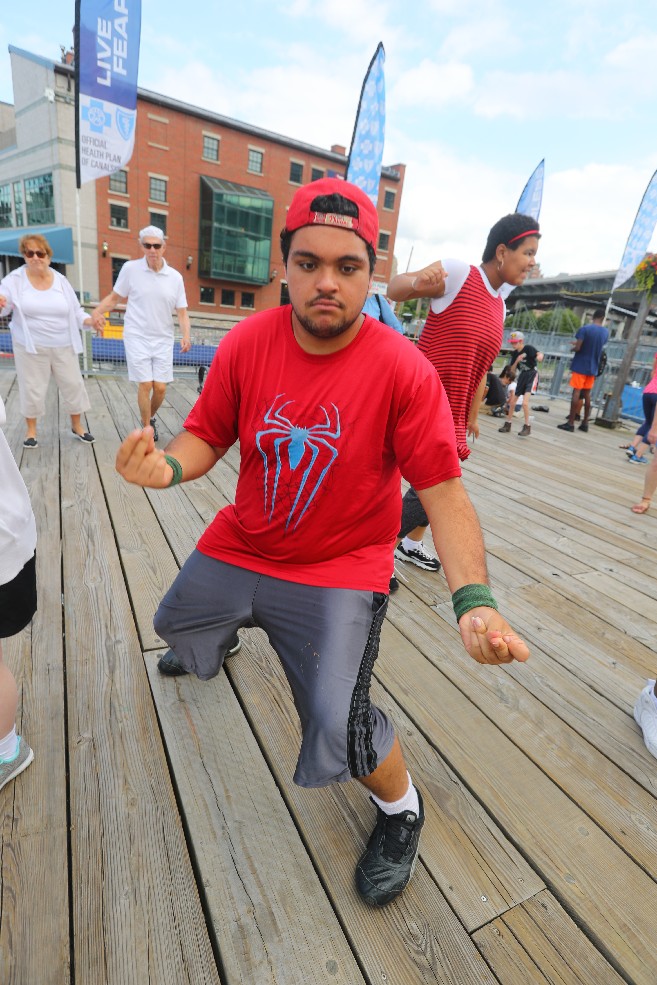 A variety of free classes are available in Western New York to address the symptoms of Parkinson's disease. Anyone is able to come and may bring a care partner or family member with them. They include:

Art Moves Me: Parkinson's-specific classes, though open to the public, from 10 to 11:30 a.m. most Wednesdays through November at the Burchfield-Penney Art Center, 1300 Elmwood Ave. Taught by Cynthia Pegado, who says, "It's quite an intellectual class where we're looking at artwork and figuring out how to interpret it with movement." Classes are open to all but numbers are limited; register at cypegado@gmail.com or 878-6011.

Parkinson’s Perk Café: Social hour from 6:30 to 8 p.m. the first Wednesday of each month at Dry Gulch Dance Hall, 3145 Walden Ave., Depew. Bring a coffee mug. Volunteers are needed to assist in making coffee and hosting; call 449-3795 for more information.