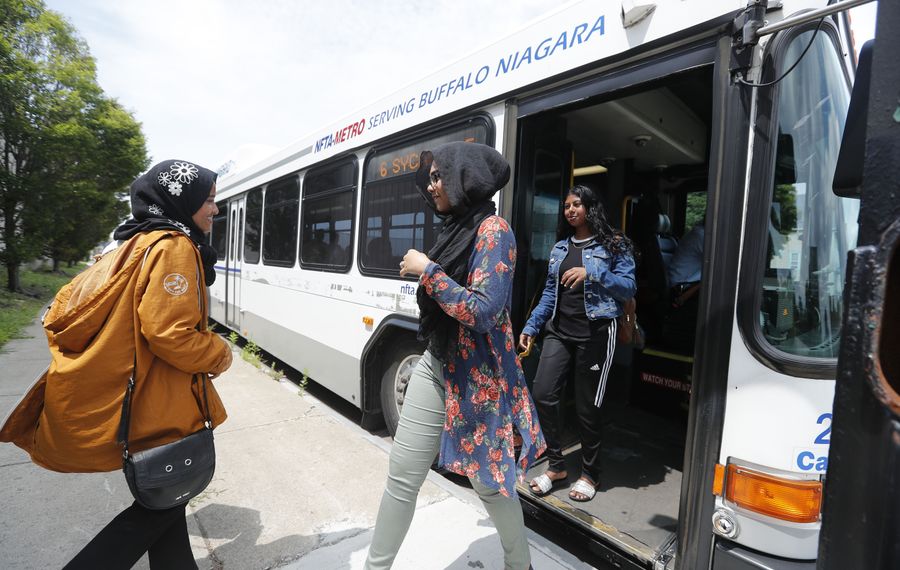 Tahmina Aktar catches the No. 6 bus at Sycamore Street and Fillmore Avenue, then hops off at Bailey and Walden avenues where she picks up the No. 19 – if it hasn’t already left.

It’s not unusual for her to miss the transfer and be late for school.

“All the time,” said Tahmina, who will be a senior at Frederick Law Olmsted this fall. “It happens more often in reverse when I’m coming home from school.”

For most high school students, getting back and forth to school is a routine ride on a yellow bus with door-to-door service. But for more than 10,000 students in Buffalo who rely on public transportation, the journey can be a bit more complicated.

Decades-old restrictions placed on student Metro bus and rail passes that the district pays full price for haven't helped. Some of the conditions:

In fact, there are several different student passes – all with varying restrictions on their use. There’s a late-night pass and a pass for summer school and a pass to attend programs on Saturdays at district community schools.

Such issues, simmering for years, are what finally brought the Buffalo Public Schools and the Niagara Frontier Transportation Authority to the negotiating table in recent weeks. The two sides hope to work out a new agreement by the time school begins in September.

What’s really raising questions, though, is why the general public pays the same amount as the district does for a Metro pass – $75 a month – but gets unlimited access to the transit system.

Why don't students get the same benefits?

“That’s just unfair – and unjust,” said Larry Scott, co-chair of the Buffalo Parent Teacher Organization. “If Buffalo Public Schools are paying a full rate our students should be able to have the same access – and not just to school, but to libraries, museums, local colleges.

“Most of our kids don’t have access to their own transportation,” Scott said, “and if you have restrictions, then they don’t have the same opportunities as wealthier families or suburban communities have.”

The parent group has pressed the issue this year and was told the school district’s current contract dates back to 1991, when the basis for the restrictions grew out of concerns about students congregating at Main Place Mall.

It was a policy devised in partnership with the district to move students safely back and forth to school, officials at the NFTA pointed out.

“Our biggest concern and priority with respect to our partnership with the Buffalo School District is safety,” said Helen Tederous, spokeswoman for the NFTA. “Our goal is to provide dedicated, reliable, safe and efficient service for students ensuring that they get to school, extracurricular activities and work study on time during peak demand periods.”

“What we’ve heard is that if it’s too open there’s concern the kids could just get on the bus and go elsewhere, besides school,” Scott said.

But if that happens, he said, just place restrictions on individual student passes.

Invariably, though, there are issues, particularly with the restricted, preassigned routing.

Tahmina said she tries to catch the early No. 6 in case she misses her connection at Bailey and Walden. That way she can hop the next bus and still make it to school on time.

But safety is a big concern for a lot of students who find themselves waiting for a bus in sketchy parts of the city, she said. Parents have long complained about the lack of flexibility in determining the best and safest route.

She just slips on her headphones, keeps to herself and waits for the bus.

Maimuna Mannan, a junior at Olmsted, is required to take the No. 5 and No. 12 buses, but actually prefers the No. 19 because it’s a straight shot. She has been known to sneak onto the No. 19, anyway, but has gotten kicked off the bus because it’s not her assigned route.

“I tried to change it, but they won’t change it because they say it’s the fastest way to get home,” said Maimuna, 16. “Why do I have to go all the way around Buffalo when I could take one bus and get home quickly – and safely?”

She doesn’t get a bus pass from the district.

“I don’t meet the required distance,” said Morzina, a junior at Olmsted. “I have friends who live on the same street as me – one three houses down – and because they meet the limit, they get a bus pass and I don’t.”

So Morzina, 15, walks the 20 minutes to school, sometimes by herself, enduring the Buffalo winters and the catcalls from the guys along Bailey Avenue.

All four of the students are involved in a 4-H program through the Cornell Cooperative Extension of Erie County. The group from Lafayette decided to make public transit their cause, said Sara Jablonski, the program coordinator.

“They just want an easier way to get to and from school,” Jablonski said. “It’s not just them, obviously. It’s an issue across schools.”

When Jablonski reached out to Scott, he encouraged her to push for changes in the district’s contract with the NFTA, which the parent group has been advocating for over the past year.

Scott has been encouraged by the developments.

Both the school district and the NFTA declined to discuss details of the negotiations, but expressed hope that a new agreement would be reached soon.