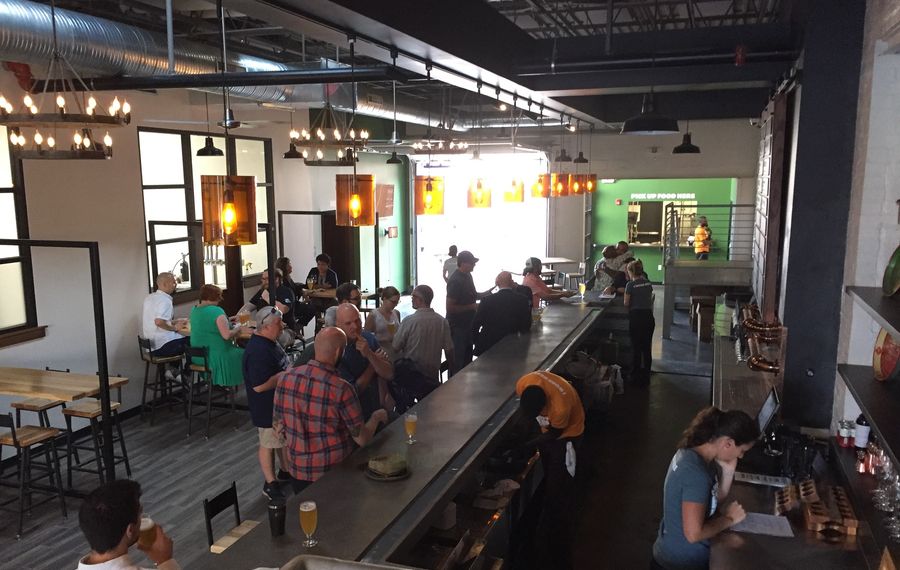 When Community Beer Works co-owner Chris Smith looked around the brewery's new location in Buffalo's lower West Side, his casual observation was telling.

"It's almost too nice for us," said the CBW vice president during a soft-opening party at 520 7th St., the first offshoot from CBW's original location, at 15 Lafayette Ave., which opened in 2012 and will remain a production facility into 2019, although that taproom will close temporarily following an Aug. 4 going-away party. The full menu and regular hours will begin Aug. 10.

Smith's statement reflected the humble origins of the 6-year-old brewery just as much as the new 2,400-square-foot taproom, which is complemented by another similarly sized area for beer production and then 5,000 square feet for packaging and storage.

Although it took longer than expected to come to fruition, the new space, which officially opens to the public from 3 to 10 p.m. Aug. 4, doesn't lose sight of the general mission set by Smith and president Ethan Cox: to brew classic beer styles in the Buffalo area, fit in within the personality of its neighborhoods and maintain a blue-collar attitude in a climate where Buffalo breweries are more eager to one-up each other.

Even with significantly more space and its first-ever kitchen, Community Beer Works remains about beer first. The initial tap list included CBW staples such as Frank, the Whale, the IPA and Amazing Larry (a cream ale), which can be found in bars across Buffalo. When other local breweries spotlight sponge candy and Creamsicle as marketable flavors, CBW forgoes flash for substance.

"Our approach to brewing has always been classic beers," Smith explained. "If there are adjuncts or fruit or a little twist to the beer, we always use it to showcase the style of the beer. You don't want the adjuncts to overcome the beer." 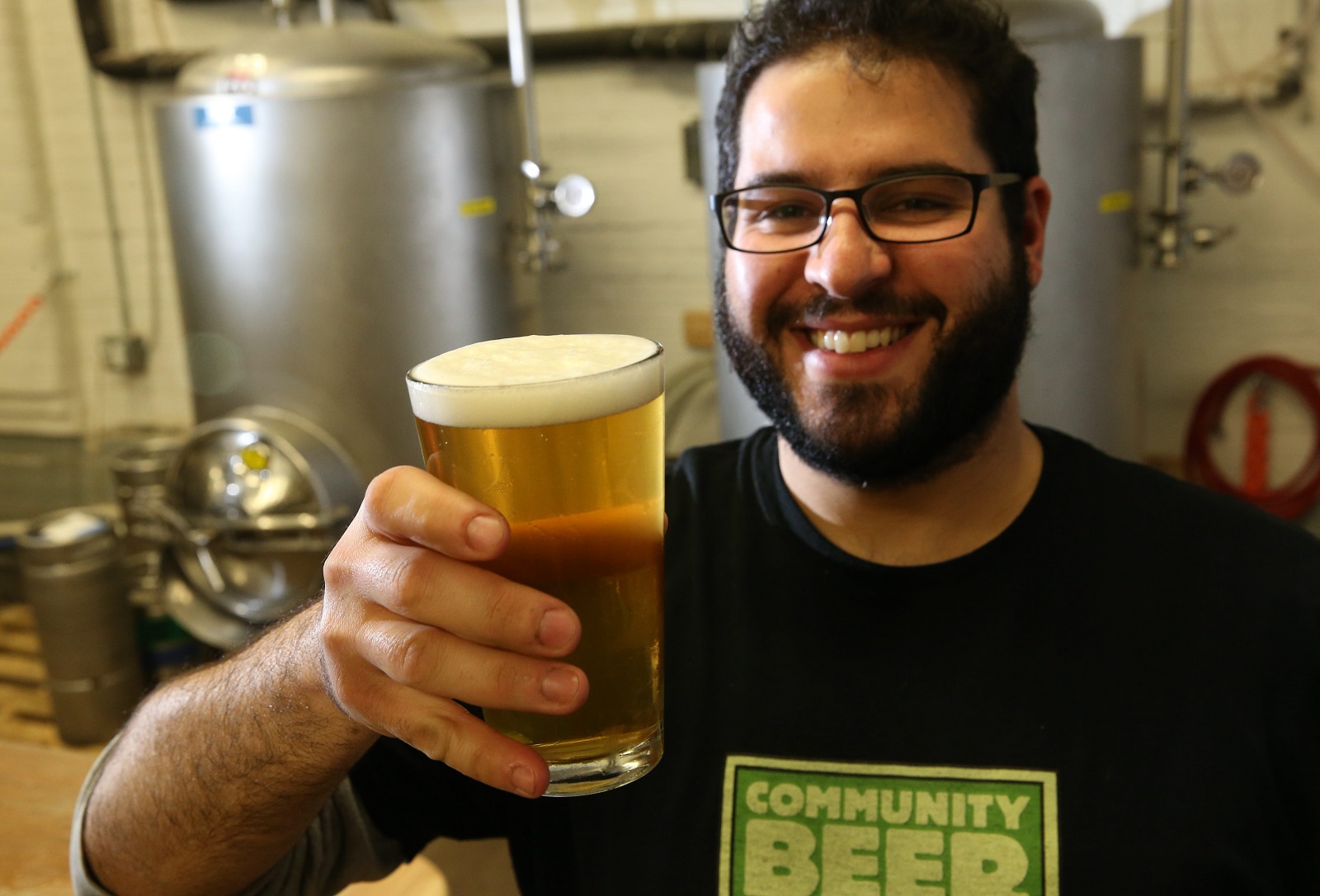 At the 7th Street taproom, Fruit Berliner Weisse – a cloudy, sour beer with subtle fruit flavors – and the Grey Lady – a grisette that "no one really makes very often," Smith said – are among the seven to 10 beers that will grace the Community Beer Works tap list beyond the flagships. 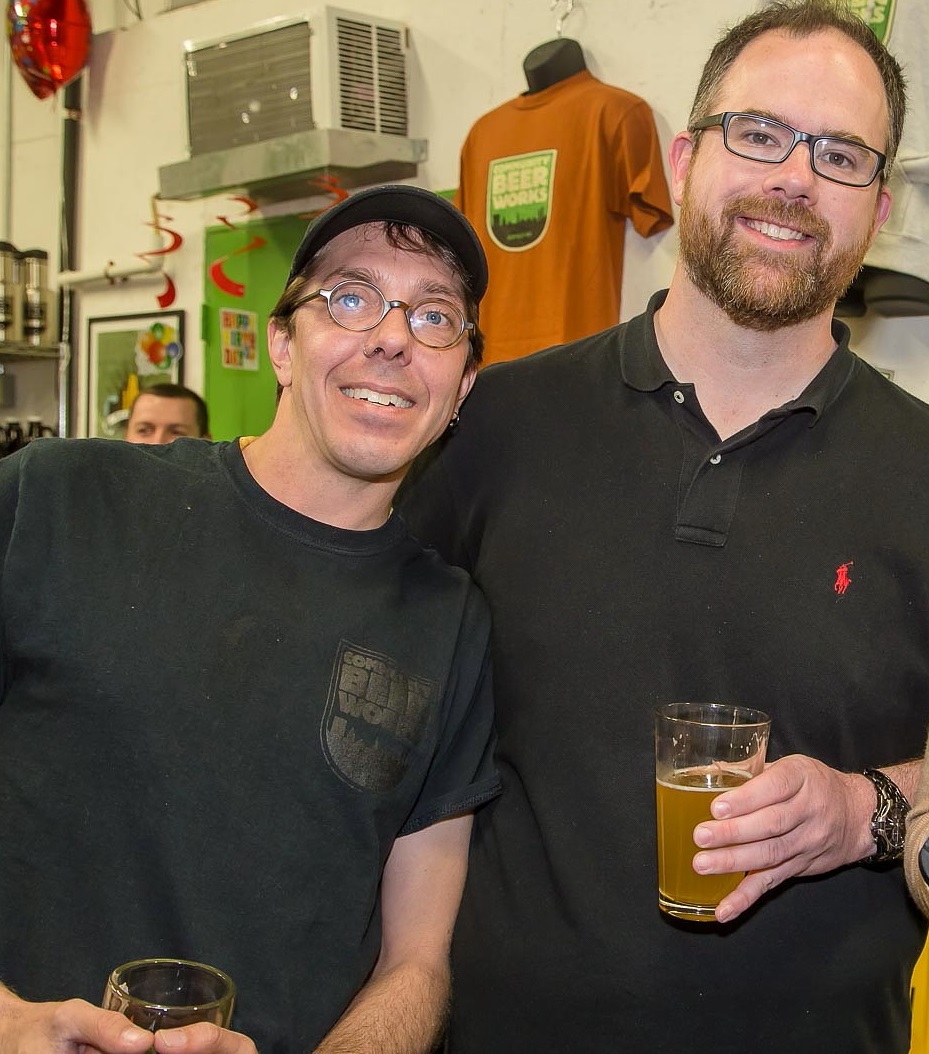 CBW president Ethan Cox, left, and vice president Chris Smith, pose for a picture in 2015. (Don Nieman/Special to The News)

Smith and Cox emphasized the local and connective aspects of beer, both in relation to brewing history and how a conscientious brewery can impact a city.

"For hundreds of years, beer was produced locally to be consumed locally by your neighbors – it was a fresh product like bread, you try to drink in seven to 10 days, and that was that. Capitalism happened and took that away – it's easier to make more money at scale, with more marketing. Here, it's about having a place to make the beer we like."

"If we get people away from the idea of craft-beer snobbery; if people want to drink a Blue, then drink a Blue – it's not our business," he continued. "But if you want to drink good beer, drink local beer. That's really our angle now – this is a local place built by local guys with local money trying to make beer for people in the neighborhood and across the city."

Jeff Yannuzzi, the former beverage manager at New Orleans-style restaurant Toutant, is the bar manager at the new Community Beer Works taproom. He's expected to curate a wine list, too, to complement the beers on tap.

Although CBW's food comes second to the beer, the brewery hasn't taken shortcuts in the kitchen.

"We don't want to waste an opportunity to have good food here just because we're a brewery," explained general manager Kate Elliott, who's worked previously at Merge, Clinton's Dish and the Niagara Falls Conference and Event Center. "We want to be able to provide food for people so that they stay, but it's certainly not the focus of our venture here."

During the soft opening, a series of small plates was available, topped by a bite-size chicken-and-waffles boat ($10) inspired by Chef Marcus Samuelsson's Ethiopian-influenced Uptown Fried Chicken. The sweet and salty duo complemented the beer well, and the maple syrup had been absorbed by the starch, which fortunately made for a cleaner-than-expected endeavor.

Among the standouts were the roasted cheese and corn fritters (served with blistered shishito peppers and avocado cream, $8.50) and the hand-cut fries ($6), served with a choice of two dipping sauces. The fritters are tasty, spicy bites – with a good outer crunch (hey, they're fried) – tempered a little by the avocado. 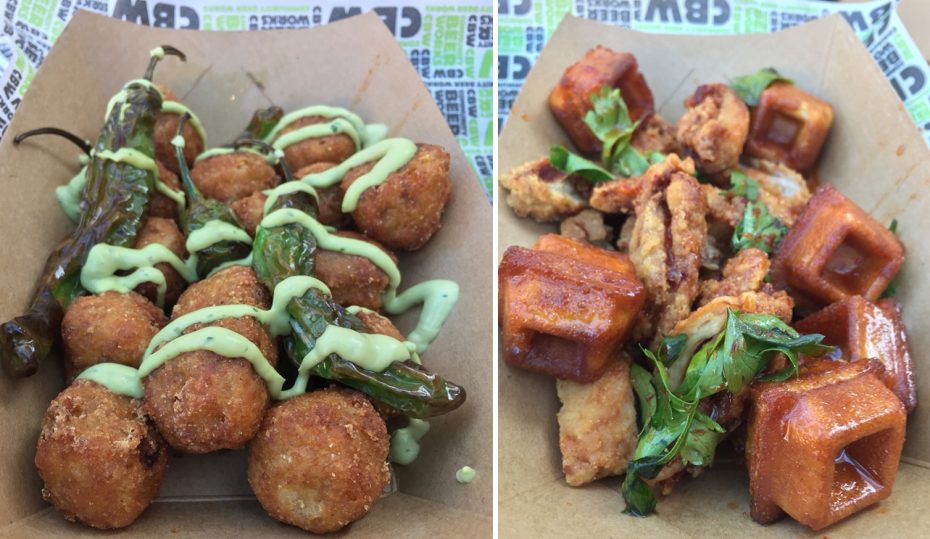 The cheese and corn fritters, left, are topped with an avocado cream, while the chicken and waffles are inspired by renowned chef Marcus Samuelsson's Uptown Fried Chicken. (Ben Tsujimoto/Buffalo News)

The fries weren't cut in-house, but they did boast a barely distinguishable rice-flour batter, Elliott noted. The sauces offer a world of opportunity; while the addictive garlic parmesan was our safe and satisfying bet, the curry banana ketchup (which actually includes no ketchup) was balanced and brought the umami.

Gochujang – a Korean chili sauce – was an unexpected option that was beyond our two-sauce limit. 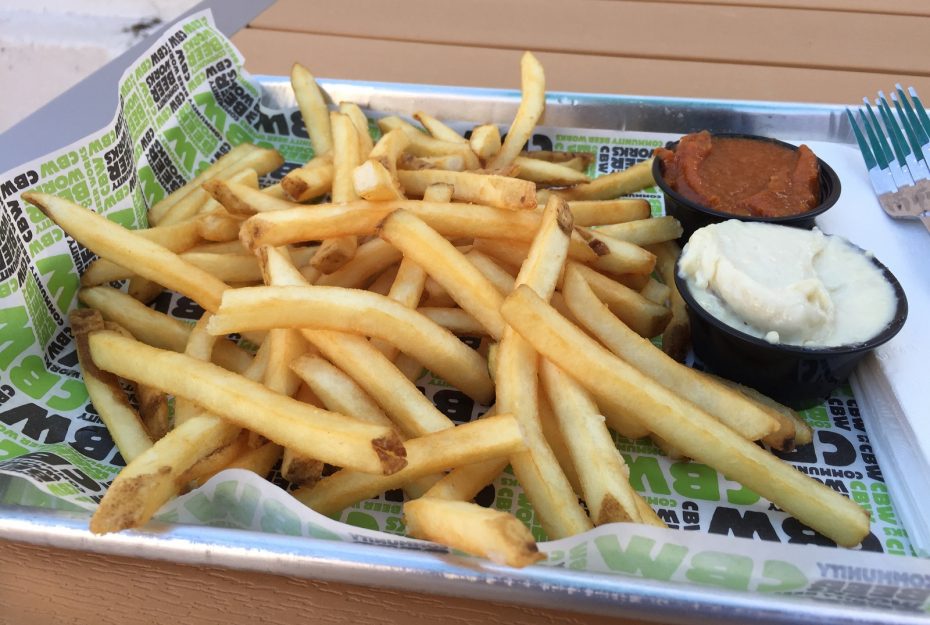 The basket of fries from Community Beer Works is available with the choice of two of the brewery's six sauces. Pictured are the curry banana ketchup, top, and garlic parmesan. (Ben Tsujimoto/Buffalo News)

Casually observing other eaters, the Totchos (cheddar, bacon and pickled jalapeno tater tots, with a smoky garlic cream, $9) were the most popular small plate sampled.

According to Elliott, though, there's more to come in CBW's taproom food menu. Four basic vessels – a beef burger, vegetarian beet burger, Mineo & Sapio sausage patty and a rice bowl – may be customized with any of 35 add-ons, each for a small additional fee ($.50-$1). For the first three vessels, lettuce, tomato, onion and one sauce are included, while the rice bowl comes with sauteed spinach, mushrooms, pickled red onions and a choice of sauce.

Examples of add-ons include Barrel + Brine kimchi, house pickles, a fried egg, avocado, bacon, pickled jalapenos and the rest of the sauces. "You'll be able to get a double cheeseburger with a side of fries for about $12," Elliott said.

Elliott worked with US Foods' Corey Kley, the former executive chef at Rue Franklin, to sculpt the menu from a test kitchen. The trial process was a little tedious; the pair auditioned 14 different kinds of french fries, she said.

The general manager added that there's an allergen-free fryer, too, which sees no meat, gluten or soybean oil. The ordering system, conducted on an iPad, involves an option where the eater may provide their cellphone number to receive a text message when their food is ready.

The culinary program will be more extensive at Community Beer Works' Niagara Falls location, at 324 Niagara St., which is planned to open before the end of 2018.

The concept and space

How does an established brewery create a new taproom, production space and restaurant in one of Buffalo's least flashy areas? First, welcoming and involving the neighborhood was imperative.

"None of us are businessmen; we're brewers and regular dudes," Smith explained. "I think that's what happens when we go out in the neighborhood. People see that about us, that we walk around with our kids – kids are always here, we've invited everyone in all the time. Everything we do here is about families, neighborhoods, making fresh beer for everybody."

Perched on Smith's shoulder was his son, Theo, who dipped his fingers mischievously into his father's Amazing Larry cream ale as the VP discussed the new space. As long as the 21-and-over age limit is obeyed, there's no reason a brewery cannot be family-friendly. 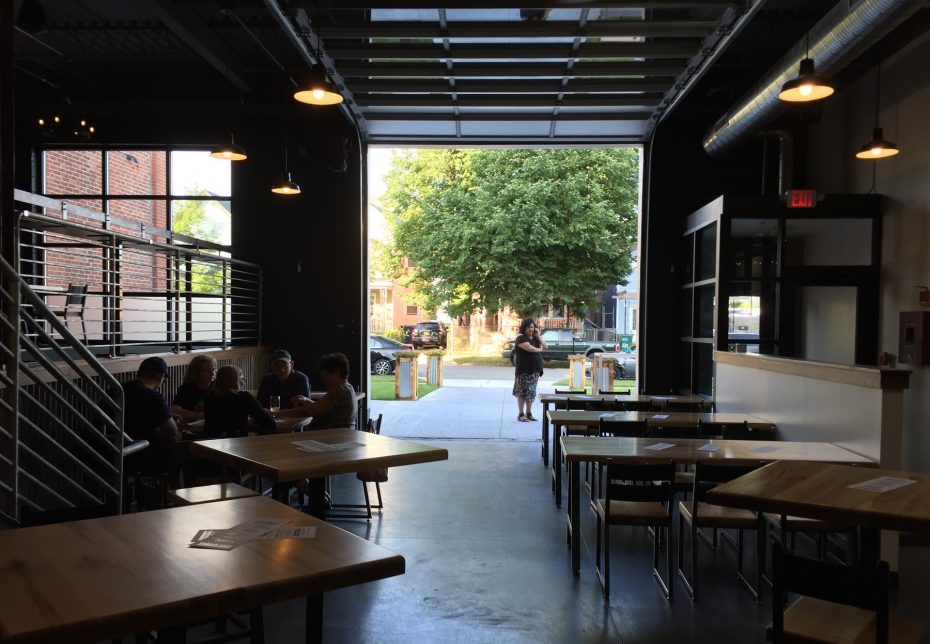 The entrance to the new Community Beer Works, facing 7th Street in the West Side. (Ben Tsujimoto/Buffalo News)

Expressing a desire to connect with the neighborhood doesn't appear to be PR spin; Elliott noted that four of her first hires came from the surrounding streets – Jersey, Busti and Pennsylvania – and that a multilingual translator will be brought in to make the place more accessible to local immigrants and refugees. On Tuesdays, the new taproom will be closed to the general public but open to the immediate neighborhood.

"Craft beer is a very white thing; it's like pumpkin spice for white guys," Elliott said. "But it doesn't have to be."

"Community is essential to who we are," Smith chimed in.

Even before the Community Beer Works team could put their design plans into action, 10 30-yard dumpsters were filled with trash from the former Schaefer & Brother malthouse-turned-chocolatier that's sat vacant for decades.

In constructing the taproom, the CBW team kept much of the outer structure intact, reusing materials found in the building, highlighting industrial elements and adding wooden touches.

"The fanciest thing we have in here is the lights," Smith said.

While the 7th Street space as a whole is split into thirds – the 20-barrel production facility, storage and taproom areas – the taproom is further segmented, for intimacy's sake, into the main indoor bar, an enclosed patio space and an elevated portion with wooden tables and a door leading to a hidden game room, which had yet to be outfitted at the time of our visit. 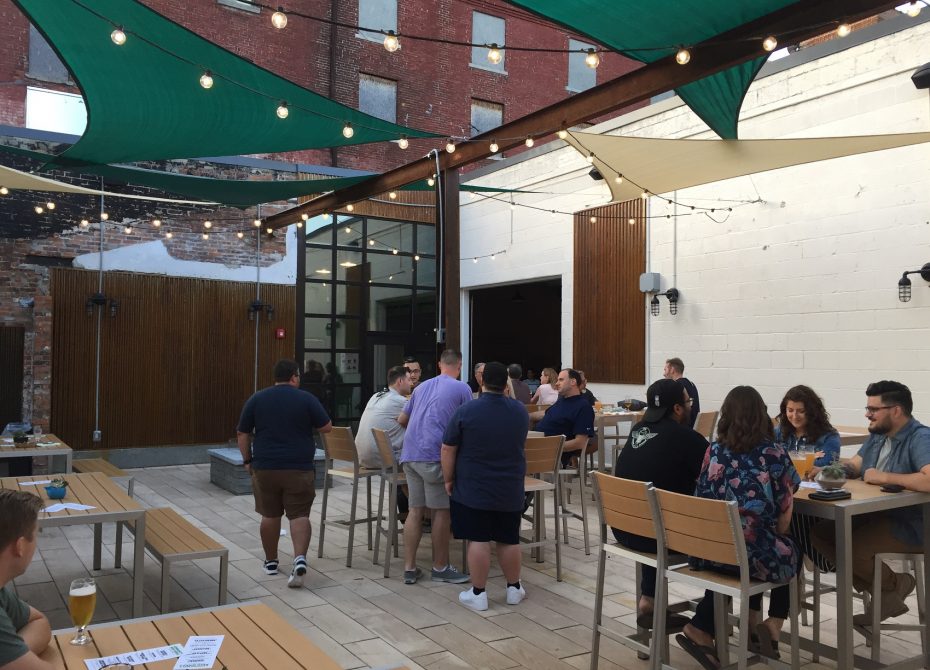 The patio is relatively uncluttered and unsophisticated, with an assortment of tables, colored canopies and a fire pit adding to the ambiance. The indoor bar area features windows that offer a glance into brewery operations, and four cornhole boards grace the green space by the entrance.

While there's much to explore in the new brewery-taproom, the layout is thoughtful and not overly showy.

"The things that make our space special: We built it all ourselves, and it was in a neighborhood," Smith summed. 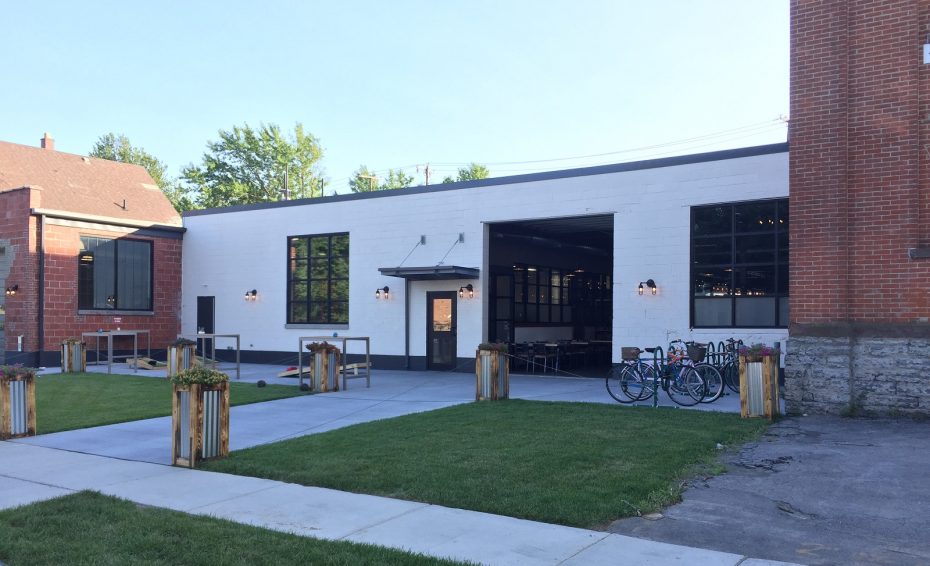