UPDATE: Russ Brandon is not joining New Era Cap, after discussions "did not fully materialize."

A handful of years ago, Russ Brandon offered Chris Koch an enticing (and expensive) opportunity. Brandon, then the CEO of the Buffalo Bills, called Koch, the leader of his family’s company, New Era Cap Co., and asked, “What do you think about putting your name on the stadium?”

This week, Koch seems to be the one doing the offering. Brandon, the longtime front-office leader of the Bills and more recently the Sabres, is apparently joining the executive ranks of Koch’s Buffalo-based headwear company. The Athletic first reported Monday night that New Era hired Brandon, who resigned May 1 from his position as president of Pegula Sports and Entertainment, which includes the Bills, Sabres, Bandits, Beauts and Rochester Americans.

Neither Koch, New Era nor Brandon has confirmed the hiring, and multiple New Era employees expressed surprise over the move, indicating that it hadn’t yet been widely announced. But The News confirmed that Brandon’s New Era email address and phone extension are already in the company’s system. There’s no word yet on Brandon’s duties, official title or start date.

Koch’s apparent hiring of Brandon gives the former sports executive a second chance of sorts. Brandon resigned his position amid allegations of workplace and personal misconduct. Though it was officially a resignation, Bills and Sabres co-owner Kim Pegula confronted Brandon about the allegations, The News reported. Brandon resigned after an internal investigation.

Brandon, who had been with the Bills for 20 years, said in a statement at the time that he had been “contemplating transitioning out of my role for some time.”

Kim Pegula, who took over as president of both teams, has never publicly disclosed the details of what led to Brandon’s departure. Later in May, however, she addressed the situation in an interview with The News.

“I was very disheartened because, obviously, we had put him in a high position of president of both teams and PSE,” Pegula said. “So when you put that amount of confidence in somebody and you are expecting them to do a job worthy of that title, and that’s not what you're getting back, it’s always disheartening.

“And, also, every relationship we have is personal. There were many trips that we took, there were many not official business things that we would do just from a personal (standpoint), so it was very disheartening that it had to happen.”

How Brandon's addition to New Era, which is a close partner of Pegula Sports, isn't yet clear. A Pegula spokesman did not immediately respond to a request for comment.

Koch and Brandon have a personal relationship that dates back a quarter-century. The two men dine and golf together and have been friends since the early 1990s, when Brandon was an executive with the minor-league Rochester Red Wings and then with the big-league Miami Marlins, and Koch was working for his father, David C. Koch.

In August 2016, when the Bills and New Era announced their naming-rights deal at the newly christened New Era Field, Brandon reflected on their relationship in an interview with The News. “Chris and I have been friends for 25 years,” he said. “I knew his dad, David, well; his mom, Valerie. To see this all come together today is pretty emotional, I think, for he and I.”

The seven-year naming rights deal, which cost New Era a reported $5 million to $7 million annually, was part of a long-term plan developed years earlier by members of the Bills’ braintrust, including Brandon and team founder Ralph Wilson. The Bills were working on their 2012 stadium-lease agreement with Erie County and also putting details into place that would make it viable for new ownership to keep the team in Western New York beyond the lifetime of Wilson, who was in his 90s.

“Our thought process at the time was to provide a clean building to the new ownership group to make sure that we derived as much value as possible at that time,” Brandon said. “This was all a part of a plan.”

Wilson died in 2014, and Terry and Kim Pegula, who already owned the Sabres, bought the Bills later that year. Brandon, who was put in charge of both teams, teamed with Terry Pegula in 2016 to pitch Koch on the idea of New Era buying the stadium name. They brought Koch into the empty stadium in June of that year and showed him a 3-minute video that wove the history of the Bills with the legacy of New Era, which Koch’s great-grandfather founded in 1920.

Koch, who choked up, started seriously considering the question Brandon had lightly floated by him years earlier: “What do you think about putting your name on the stadium?”

The deal was made official in August 2016 with a news conference that included Bills officials and the Koch family.

After the news conference, Brandon stood on the turf and talked to The News about the company he now appears to be joining. He lauded Chris Koch and Chris' wife, Lindsey Koch, who is a driving creative force at New Era, for building the company into a brand that’s widely known in popular culture. New Era Cap is regularly visible in movies, television shows and on stage, and the company frequently collaborates with fashion designers and tastemaker brands. While New Era is best known in North America as a sports-related entity, in global markets – particularly Asia – the company has established itself as a fashion brand and has a strong business selling apparel and accessories. Today, just over one-third of New Era's revenue comes from outside North America.

“It’s amazing,” Brandon said. “They were pretty much a cap company 25 years ago and to see what they've become — I mean, they're an iconic brand. Everyone knows New Era.”

In early 2015, Koch parted ways with his longtime friend and company president, Pete Augustine, and took over day-to-day operations of New Era. That set off a series of changes that ultimately resulted in the departure of at least a dozen executives, from directors to vice presidents, most of whom had been at New Era for decades. 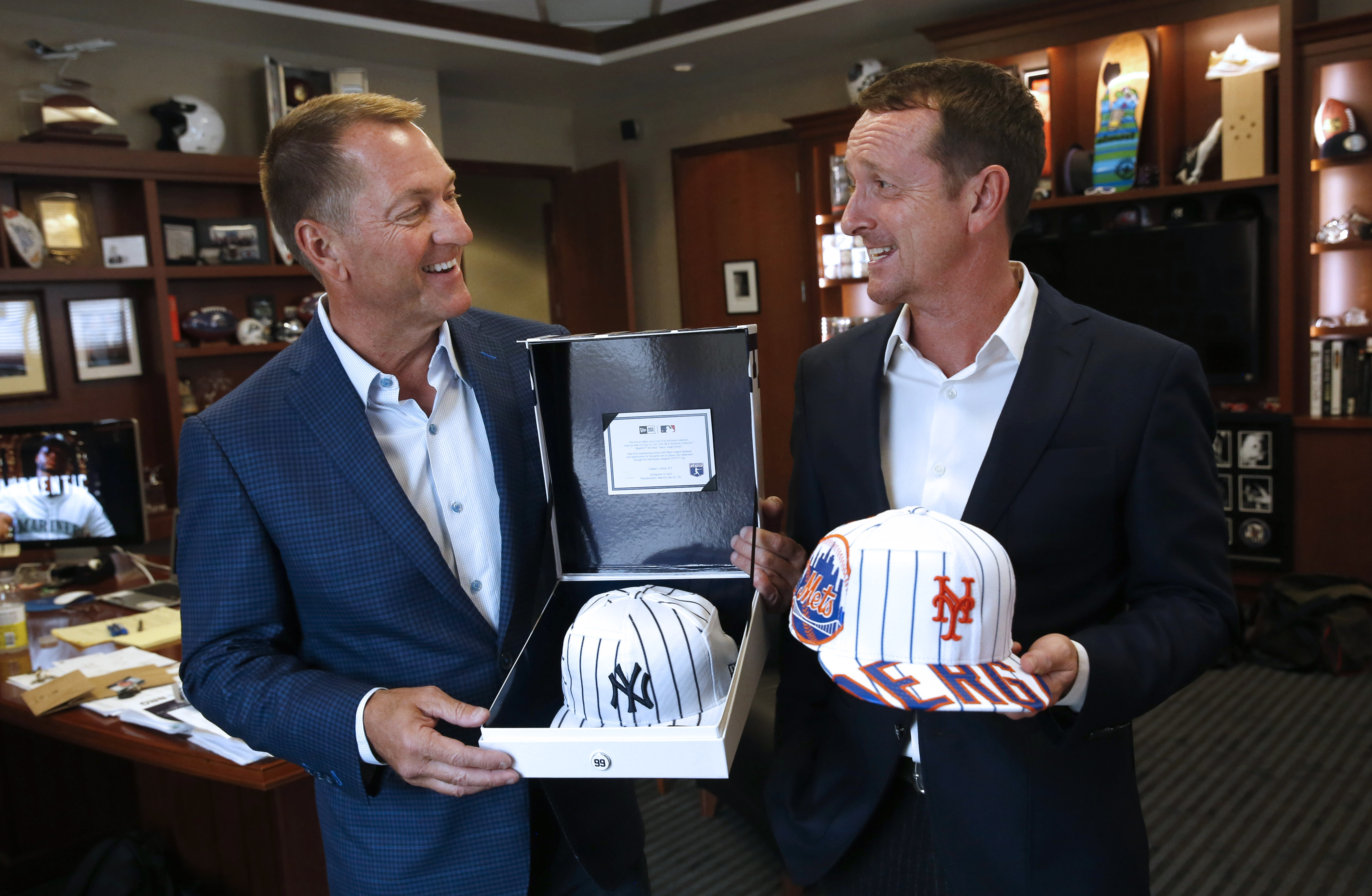 That was only in 2015 and 2016. Since then, even more high-level shuffling has happened, and the trend of who comes in is consistent: New Era’s management and executive ranks are populated by people with big-brand experience. Koch’s right-hand man, for example, is Paul McAdam, an executive vice president who oversees New Era’s North American operations. Before coming to Buffalo, McAdam held president and CEO titles with Quiksilver, AllSaints and Ben Sherman. McAdam, in turn, recruited New Era’s senior vice president for brand, Mark Maidment, who formerly was CEO of Ben Sherman in London. Other New Era executives come from companies such as Adidas, Converse, Burberry and Vans, among others.

In an interview with The News last spring, McAdam, discussed the changes New Era has made over the last couple of years. “We wanted the organization to be talking about how we promote our brand, how we deliver great product, how we deliver great marketing stories," McAdam said. And what talent do we need to allow us to do that?”

Though McAdam's comments were not made in the context of Brandon, they do fit the former team executive's core skills. Brandon, by trade, is a marketer. He joined the Bills in 1997 as marketing chief and, as he ascended in the organization, kept the season-ticket base strong and regionalized the team both Upstate and in Southern Ontario even as the Bills entered a long playoff drought.

McAdam, again not speaking directly of Brandon, described the creative atmosphere he is promoting at New Era. “We should spend most of our free-thinking time talking about how we develop this brand, and great products, and great marketing," he said. "For me, the cultural change was to have people really spend most of the day talking about those things.”

Global reach is a point of pride

In interviews and casual email email conversations, Koch has consistently spoken with pride about New Era's evolution into a larger, global brand.

“When my father died (in 2002), we were a small company,” Koch told The News in 2016. “We were a U.S.-based baseball company. That was it. Everything I have done in the last 15 years has been all about proving to myself and proving to him that we could be some much more than what we were.”

Brandon, speaking on the New Era Field turf that day when the deal was announced, was doling out the expected plaudits. No one realized at the time, of course, that he was also speaking to his future.

“To see that from where they've been to where they are now, it's a credit to that man, Chris Koch,” Brandon said, nodding to the man who has long been his friend and who now may be providing him an opportunity to come back.