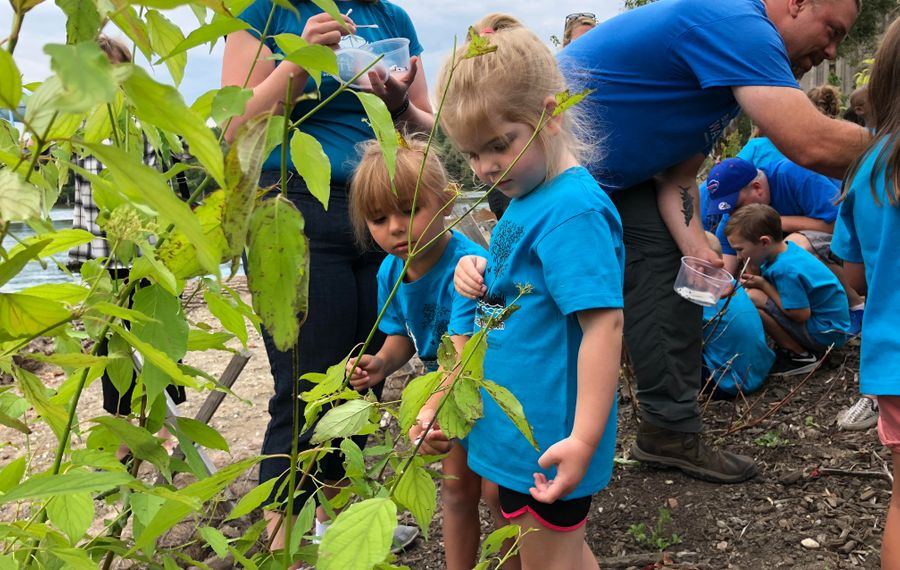 Not long ago, Monday's view from the toe of Katherine Street seemed like a dream.

The Buffalo River and its shoreline — once choked by industrial pollution — now is home to minnows and fish, rare spiny softshell turtles, geese and deer.

It's the result of a decade's worth of work and some $75 million for environmental restoration.

Buffalo Niagara Waterkeeper — flanked by officials from the U.S. Environmental Protection Agency, state Department of Environmental Conservation, Great Lakes Commission and a couple dozen pre-schoolers from the Valley Community Center — on Monday declared complete its five-year mission to rehabilitate habitat at eight sites along a 6.2-mile stretch of the river from Canalside to Old Bailey Woods.

Jedlicka added: "In addition there was almost 20 acres collectively of habitat that have been restored and enhanced."

"This cleanup has helped secure a new lease on life for this river and for future generations," said Rick Balla, a chief of watershed management for the EPA's regional office. "And, of course, the improved ecological conditions also benefit Lake Erie and the human and aquatic communities that rely on it."

Some of the restoration work completed by @BNWaterkeeper along the #Buffalo River near the toe of Katherine Street. #GreatLakes #GLRI pic.twitter.com/0SgGolUdns

Rep. Brian Higgins, who was among the early members of the Friends of the Buffalo River in the late 1980s and early 1990s, said the river's ecosystem has come a long way over the years.

That sprung from the nation's first Earth Day in 1970 and the birth of grassroots organizations like the Friends of the Buffalo River, a predecessor to Buffalo Niagara Waterkeeper. The momentum led to local, state and federal cleanup and restoration efforts.

"That was a major game changer," Higgins said. "The federal government didn't propose these programs. The energy came from communities like Buffalo up to Washington."

And, Higgins added: "Buffalo has been a national leader for lake and river restoration work."

The restoration work has also spurred economic development along the river, including at Canalside, in the First Ward and other locations.

"For every 1 million dollars in investment and funding, we create 16 jobs," Catena said. "It's a real thing."

The first phase of the project involved removing about 1 million cubic yards of contaminated sediment from the bottom of the river and the shoreline.

Then, in 2015, habitat restoration work began.

Now, instead of contamination and the overgrowth of invasive plants such as Japanese knotweed, what you see now along the Buffalo River are turtle basking and nesting areas. Rootwads along the shoreline provide shelter for fish and perching spots for birds. And thousands of native plants and trees boost pollination.

The next steps will be maintaining what's been done.

‘The challenge now is momentum," said Don Zelazny, the DEC's Great Lakes Coordinator. "How do we keep this going?"

Jedlicka had an answer — and a couple willing toddlers — by her side.

"A lot of this is being driven by the community," said Jedlicka, citing organizations such as the Valley Community Center, which provided the children for Monday's event. "We need to train a new generation of Buffalo River stewards."

The Valley Community Center supplied youthful energy along the banks of the #Buffalo River today at @BNWaterkeeper event announcing the completion of habitat restoration there. #GreatLakes https://t.co/i4K0braFcG

Jedlicka said the Buffalo River remains on track to be delisted as a federal area of environmental concern by its targeted date of 2022.