A second new sports complex may be coming to Buffalo's First Ward and Valley neighborhoods, as the area along the Buffalo River southeast of the city's downtown is increasingly becoming an adult playground for a variety of sports and entertainment activities.

Ellicott Development Co. this past week unveiled new plans for a $2.5 million Downtown Sports Complex, diagonal across Ohio Street from the Buffalo Scholastic Rowing Association. Located at 300 Ohio, it would be sandwiched between Father Conway Park and the developer's Cooperage project.

It's also near fishing and kayak launch sites on the Buffalo River and the Buffalo City Rod & Gun Club, down the street from the Tewksbury Lodge and River Fest Park, and within sight of the RiverWorks adventure and entertainment destination on the other side of the Buffalo River on Ganson Street.

And it comes as Jon Williams' South Buffalo Development is already building an indoor and outdoor complex on 15.8 acres of land along Elk Street, as part of his larger 21.7-acre project at the Schoellkopf Power House. 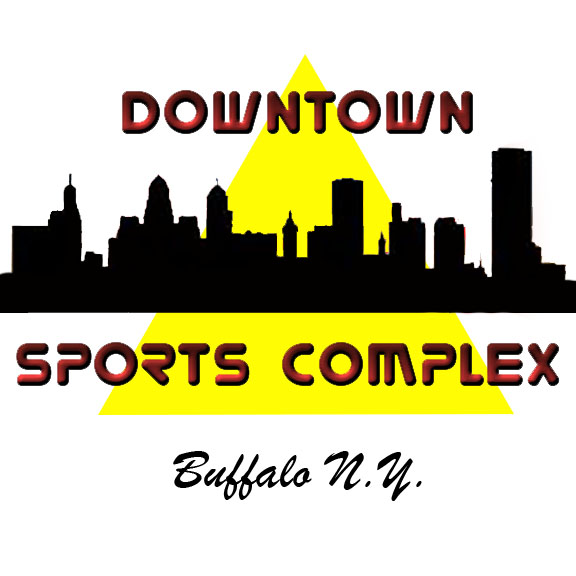 Ellicott's plan involves building a 30,000-square-foot sports facility, featuring a 110-by-200-foot enclosed field with protected viewing areas and food service, including beer and wine. It will also install two 40-by-40-foot outdoor volleyball courts, with a raised viewing platform that looks out over the courts and the adjacent Father Conway Park, where teams will play softball.

“The addition of this exciting new facility ... will further contribute to the growth and revitalization of this former industrial area,” said William Paladino, Ellicott CEO. “It will synergize well with our adjacent developments both completed and underway.”

The proposal is expected to come to the Planning Board for review in early fall, Paladino said. If approved, it's expected to be completed by spring 2019, with the first volleyball teams slated to start playing in May alongside softball, followed by football in the summer.

“We are extremely pleased to be part of the revitalization of the Old First Ward by partnering with Ellicott Development Company on our indoor/outdoor sports complex adjacent to the Cooperage,” said Damico, who is president of facility operator M/ilesports. “The Downtown Sports Complex will be a fine asset for the area. Groups and individuals who would like to get involved should contact us right away. We are getting ready for the 2019 sports seasons.”

Damico is a sports promoter whose company has run adult football, soccer, softball and kickball leagues across the city for over 20 years, with both men's teams and coed teams.

His league's games are currently held at Delaware Park and other city parks, as well as the Nardin Fieldhouse and the Adpro Sports Training Center in Orchard Park. But those fields are geographically spread out and not consistently available, so Damico dreamed of uniting them in one location in the city.

He initially tried to work with Williams to accomplish that goal on Elk Street until the two bitterly parted ways months ago amid acrimonious litigation that is still pending. Damico said that lawsuit is likely to be settled shortly, and won't interfere with the new venture.

Damico acknowledged the potential challenge of operating two similar facilities so close to each other. "We were the biggest tenant down there, and now we're not there. I don't know who would fill all those open hours," Damico said. "I plan on selling mine out."

Williams' $1.6 million project, designed by Carmina Wood Morris DPC, will include a one-story, 26,400-square-foot field house at 427 Elk, with a 61-space parking lot, and a 300-by-300-foot outdoor athletic field at 85 Lee St. It's already been approved by the city, and officials are now seeking building permits to begin work, said spokesman Phil Pantano.

Pantano added that Ellicott's new project doesn't change what Williams will do. "There's no change to what Jon had planned for the Elk Street project," he said. "Everything is the same and full speed ahead."

Williams' site plan application, which was approved by the city Planning Board, calls for an indoor complex with an artificial turf field would serve adult and college teams for soccer, lacrosse, volleyball and "other similar sport activities." Limited refreshments would be available from an indoor snack counter, which would have a liquor license to serve beer and wine.

The outdoor field would be used similarly but more for actual games, handling adult or college soccer, softball, adult flag football and other sports as needed, the application continued. It also could be divided to allow two separate games to be played at once.

The indoor facility – located on the corner of Elk and Orlando streets – would be capable of handling up to three teams practicing at once, for a total of about 50 to 75 adults at any given time, according to the documents. About 35 to 50 adults would be expected on the outdoor field at any time.

Before he split with the Elk Street project, Damico had not only pledged to bring his leagues to Williams, but even drew in Medaille College as the anchor operator. Medaille will use it for three of its own sports – men's and women's soccer, lacrosse and field hockey. The school signed on for 1,000 hours of playing time over 10 years.

M/ilesports had also signed a sponsorship and partnership agreement with Red Bull to run six events at the Elk Street facility over the summer – two soccer tournaments, two volleyball tournaments and one each for touch football and kickball.

But when negotiations with Williams fell through for his own leagues, Damico was left out in the cold, even though he was the driving force behind the initial concept. That's when he came up with a new idea.

Damico said he was playing softball at Father Conway Park, and hit a foul ball backwards that landed where his planned new fieldhouse would be. Seeing what was already planned for the Cooperage, he reached out to Paladino.

"It was almost natural," he said. "We had a business plan, and we had everything drawn up from the other place, and we just walked it over and showed them. Half the work was already done, so they were interested. It happened pretty quick."

Damico said his new facility will be "all adult-oriented," but with no college partner. Medaille will remain at Elk Street. He currently has about 1,100 people playing in about 100 teams – 56 for softball, 24 for kickball, 10 for football and another eight to 10 for soccer. Volleyball will be new. The Red Bull and other sponsorships will have to be renegotiated.

"My leagues will fill it," he said. "We're happy with what we have, and the amount of people that are already in there."