It's Year 4 of the battle over a potential wind power project near Lake Ontario, and last week opponents said they expect things to drag on into Year 5 at least.

Meanwhile, the developer said the project will be somewhat smaller than originally proposed.

Gary A. Abraham, an environmental attorney working against the project, said at a meeting of opponents Wednesday that he anticipates it will be at least 16 months before there's a decision on whether the project is built.

Apex Clean Energy of Charlottesville, Va., filed preliminary plans in Albany for permission to erect as many as 70 wind turbines in the towns of Somerset and Yates.

In past years, the company said each would be as much as 620 feet tall, including the length of the propeller-like blades, making them the tallest structures in the state outside of New York City.

The company said Saturday it now expects to erect 45 to 50 turbines, each less than 600 feet high.

But the company hasn't filed a final application for its Lighthouse Wind project.

"We expect the siting process to begin in January and take at least a year," a company spokeswoman said Saturday.

"They're asserting the pre-application phase will be done by the end of the year, but the application phase that follows, by statute, will take about a year," Abraham said. "That's where the 16 months comes from."

In March, Apex signed a 290-page agreement with the state, determining 34 topics the company must address in its application.

A seven-member siting board, which includes five state officials and two local residents, eventually will rule on the project.

State law took the permitting power for wind projects away from local governments, but the same law says the siting board may apply local laws to the project "unless they're unreasonably burdensome," Abraham said.

Although surveys of property owners by the town governments have shown about two-thirds oppose the Apex plan, there are supporters.

In Somerset, according to listings at the Niagara County Clerk's Office, 36 property owners have signed long-term leases on potential turbine sites. One of them told The Buffalo News in 2015 that he expects to be paid $15,000 a year for every turbine built on his land.

Eight Somerset property owners also have signed easements allowing Apex to build infrastructure on or under their land. 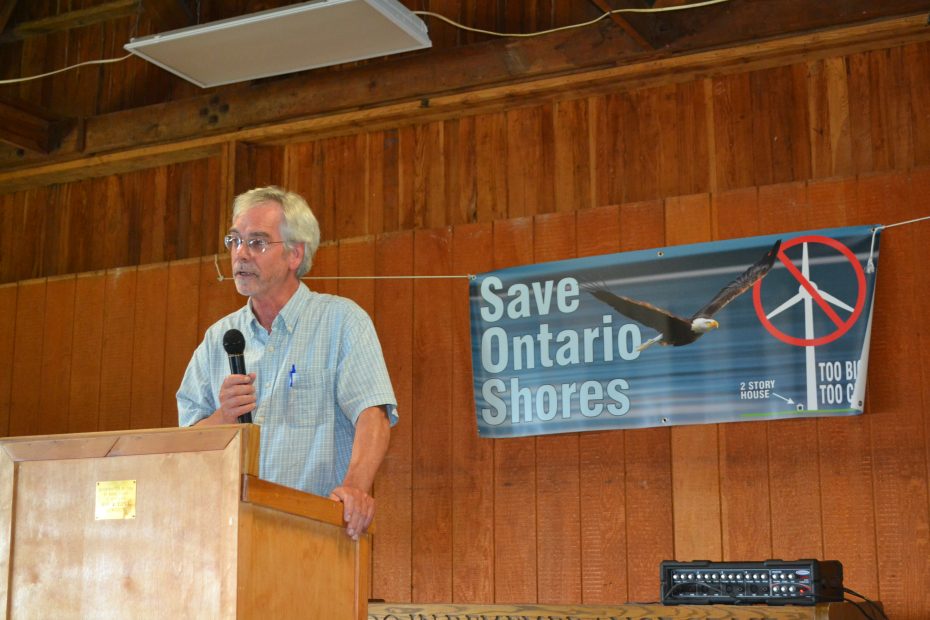 Attorney Gary A. Abraham addresses a meeting of Save Ontario Shores in Somerset on July 25, 2018. (Contributed photo)

At a Wednesday meeting of the main opposition group, Save Ontario Shores, Abraham said the turbines could generate noise of about 45 decibels above the normal background levels in the two sparsely populated rural towns.

That's enough to be heard a mile away from one of the turbines, Abraham told the meeting at Niagara Shores Campground and Conference Center in Somerset.

"Wind farms industrialize rural areas," Abraham said. "They industrialize a rural community’s character. People come here for the peace and quiet. That will be gone for most of the people who live within the project area."

Apex issued a statement saying that turbine noise is measured in "A-weighted decibels," which pertain to relative loudness, not absolute loudness.

"To the human ear, the sound produced by a turbine is no louder than a kitchen refrigerator," the company contended.