A hovercraft is perhaps the last thing you'd expect to see for sale on the lawn outside a municipal building.

But Cheektowaga Highway Superintendent Mark Wegner did just that on Tuesday when he hung a "For Sale" sign on the town's hovercraft, the same way privately-owned vehicles have been bought and sold for generations.

"We've exercised every option," said Wegner. "We tried twice to sell it on Auctions International. Back in 2014, we received an offer of $10,800, but the board voted it down."

After the amphibious craft was showcased outside the municipal garage on Union Road, Wegner said the town received several phone calls from potential buyers about the vehicle, which can travel on land, water, mud or ice.

But then the hovercraft was temporarily returned to the garage for a mechanical once-over.

The town will demonstrate the hovercraft for interested buyers at 11 a.m. July 27 at the Highway Department garage at 3145 Union Road.

The town paid $70,000 for Universal Hovercraft 19XR-IC when it purchased it new in 2011 from Universal Hovercraft,  headquartered in Rockford, Ill. Earlier this year, a deal to sell the hovercraft back to the manufacturer for $20,000 ended up dead in the water, said Wegner.

"The company was excited to get it. They had a buyer for it," said Wegner. "We've been trying to call the company numerous times. Our calls were not being returned. The deal went sour."

Councilman Jerry Kaminski went looking for the hovercraft after being tipped off about the non-sale by a concerned resident. He found the craft outside the highway garage.

"I'm beginning to wonder if we had a bona fide sale in the first place," Kaminski said on Tuesday. "At this point I don’t know. We're in to the end of July, and no one said a word. It's so confusing, nobody knows what's going on."

Not many consumers are in the market for a used amphibious craft, said an official from Auctions International, the online auction service that sells unwanted equipment for municipalities.

"It's not an everyday thing for most consumers. Usually some guy buys one who has too much money and wants something new to play with," said Richard J. Klisiewicz, general manager for Auctions International.

The town purchased the hovercraft to navigate its intricate system of creeks, but there were only two sites suitable to launch the 3,600-pound machine – in Buffalo and Ellicott creeks, said Wegner.

The craft saw 31 hours of active duty, some of it during the intial training sessions on Lake Erie and in Lawson Park, said Wegner. Despite its limited use, the craft completed at least one notable mission, said Martel.

When President Barack Obama visited the town in 2010 the Secret Service used the hovercraft to search for bombs in the drainage system below Buffalo Niagara International Airport. 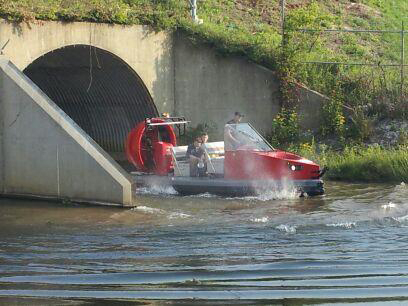